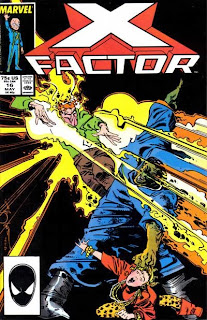 In a Nutshell
Rusty seeks out the woman he accidentally burned to make amends.

Plot
In the wake of Angel's death, Rusty and Skids continue to try and hone their powers. When Rusty accidentally breaks Skids' necklace, she, unable to pick up the scattered pearls, becomes frustrated with her inability to lower her force field and runs off. Rusty chases her into the Morlock tunnels, where they run into Masque. Unable to disfigure Skids, he turns on Rusty, but the pair escape, returning to X-Factor headquarters. Later, Rusty sees a newspaper article about Emma La Porte, the women he accidentally burned when his power first manifested, entering a hospital in New York. When he learns from Cameron Hodge that X-Factor, who has been paying Emma's medical bills, may have to cut off their support in the wake of Angel's death, Rusty becomes determined to help her some other way. He then returns to the tunnels and seeks out Masque, making a deal with him. 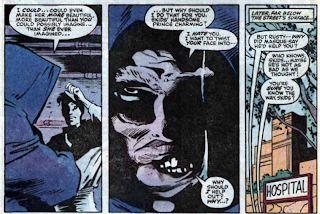 Later, Rusty, Skids, Boom-Boom and Artie sneak into the hospital where Emma is staying and locate her room. Rusty apologizes to her, and she forgives him, having found religion in the wake of the accident. Rusty tells her they've found a way to restore her beauty, and she follows them back into the sewers, where a waiting Masque returns her scarred face to normal. Per their agreement, Masque then mangles Rusty's face, his payment for helping Emma. When Skids objects, Masque restores Emma's scars and continues to attack Rusty, removing his mouth and nose, cutting of his air supply. Concentrating, Skids is able to lower her force field in order to defend Rusty, strangling Masque and forcing him to restore Rusty to normal. He does, but then runs off, leaving Emma as scarred as ever. Emma doesn't mind, however, instead following Masque deeper into the tunnels to bring religion to the Morlocks.

Firsts and Other Notables
This issue is the first time the X-Factor trainees (at this point Rusty, Skids, Boom-Boom and Artie) work together towards a common goal. Eventually, this group (along with some additional members) will form an ad hoc team in the X-Terminators limited series, before the teenaged members end up becoming part of the New Mutants in the wake of "Inferno".

Emma La Porte, the woman whom Rusty accidentally burned in X-Factor #1, returns, having found religion in the wake of her accident. She and Rusty make peace, after which she enters the Morlock Tunnels to bring religion to them as well. I don't believe we'll ever hear from her again.

Skids receives a brief origin/backstory this issue, as we learn her power first manifested itself to protect her from an abusive father, and that she left home after her father killed her mother. We also learn her real name is Sally. 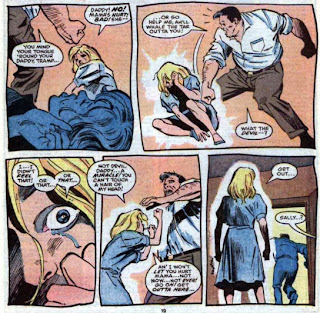 David Mazzucchelli, who penciled both the acclaimed "Born Again" Daredevil story and Frank Miller's seminal "Batman: Year One", fills in on pencils. The cover, meanwhile, comes from Walt Simonson, though I have no idea why Masque is drawn seemingly as an African-American, when he's always appeared (including when Simonson himself has drawn him) with pallid gray skin.

A Work in Progress
For whatever reason, it struck me in this issue that X-Factor's training room is called....the training room. That's it. The "Danger Room" it's not.

It's noted that Erg is leading what remains of the Morlocks in the tunnels at this point. Callisto, of course, is off with her own group of recovering Morlocks on Muir Isle. 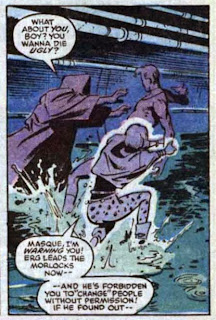 Young Love
Rusty and Skids grow closer over the course of this issue, agreeing to work together to master their powers so as to be able to advance their relationship. 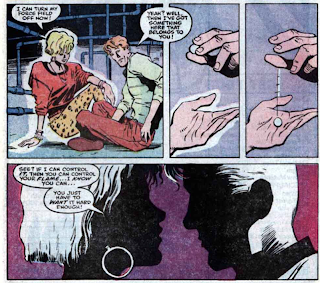 Teebore's Take
It's probably unfair to call this a fill-in issue. Though Walt Simonson is absent and the focus shifts to the supporting characters, the issue does address a plot plot lingering since the first issue of the series (the fate of the woman Rusty accidentally burned) concerning the first original character the book introduced, and there's nothing wrong with a series occasionally handing over the spotlight to its supporting characters. As a result, we see the current X-Factor trainees working together toward a stated goal for the first time, something which will eventually lead them to their own limited series and eventual adoption by New Mutants, learn a little bit more about Skids all the while Rusty and Skids' burgeoning relationship deepens further. But...this still feels very much like a fill-in issue.

While Angel's death is mentioned and arrangements for his funeral are paid lip service, this issue slackens much of the tension that had been building in the series over the last few issues, which is especially damning coming after the book's most shocking issue yet. A decompression after the death of Angel is probably necessary, but it would be better served focusing on the characters' reactions to that death (more of which we'll see in issue #17). While Mazzucchelli is a great artist in his own right (and contributed to two of superhero comics' most highly-regarded stories), his work here, inked by Josef Rubinstein, lacks the character and style of his usual work, which doesn't help the fill-in feel. Simonson doesn't help in that regard either, as her tendency to write obvious, interchangeable dialogue for characters is in full display: three different characters exclaim "good grief" in the course of this issue, and none of them are Charlie Brown. In theory, there's nothing wrong with this issue, and it serves a commendable purpose in further developing the book's supporting characters. But in execution, it's hard to get too excited by it.

Next Issue
Uncanny X-Men #218 pits the newer X-Men against Juggernaut, New Mutants #53 kicks off Claremont's final story on the title, and X-Factor #17 introduces a new trainee and a new villain.
Newer Post Older Post Home
Posted by Austin Gorton at 11:00 AM