Around the Web
One new review from me at Sound on Sight, for Nightcrawler #1, possibly the best new Chris Claremont comic I've read in years.

Also, and far more importantly, Monday sees the launch of the much-teased Saved by the Bell Reviewed podcast, co-hosted by me and Dr. Bitz, as well as Portland cartoonists Carolyn Main and Ryan Alexander-Tanner (Ryan, the driving force behind this project, is of course the mad genius behind the wonderful Full House Reviewed blog as well). You'll be able to download the first episode on Monday from our Tumblr site, and if you haven't already, be sure to like our Facebook page and follow the show on Twitter @sbtb_reviewed.

Finally, if you're heading out to the comic shop this weekend or poking around on the newly-acquired-by-Amazon Comixology, check out Shutter #1 from Image Comics. It's about a futuristic female Indiana Jones, and features a backup story written and drawn by Ryan. 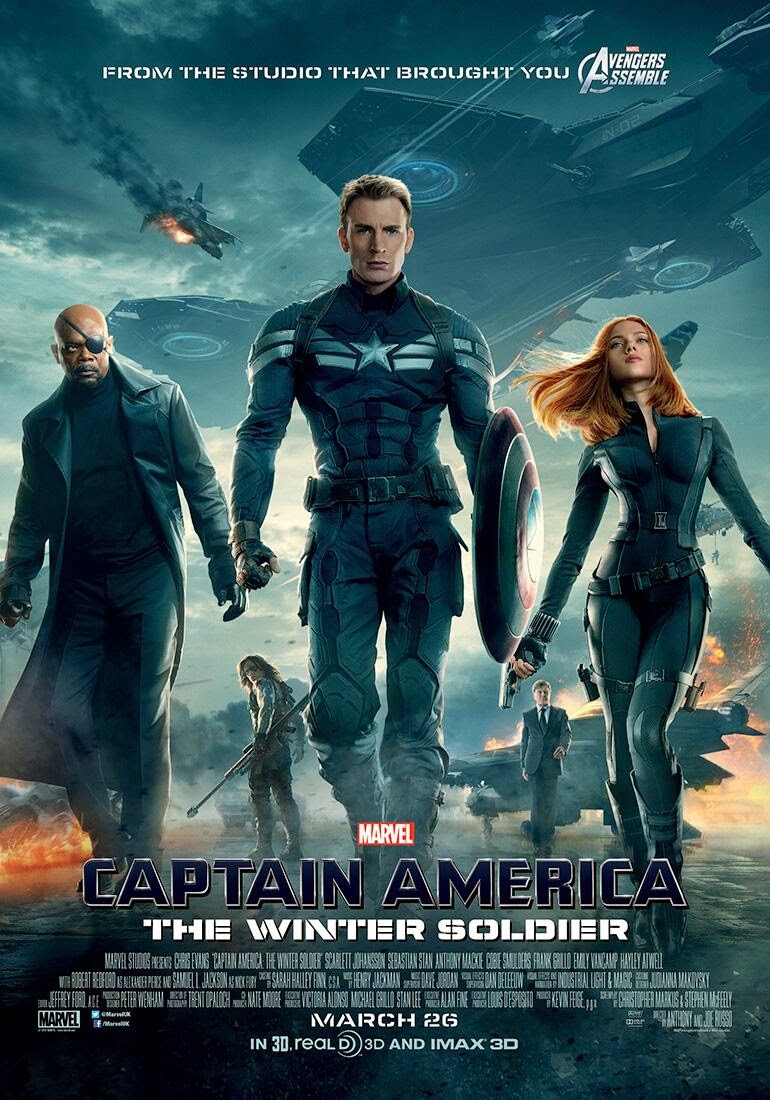 A really solid follow-up to the first film (which I think is a bit underrated these days), which made the most of its 70s conspiracy thriller vibe and did an effective job of servicing everyone in its rather large cast (this was probably the best Black Widow film yet, right?). If anything, the titular Winter Soldier was the most marginalized element of the movie - there wasn't much of a reason for him to be the one leading the Hydra/SHIELD strike team other than his connection to Cap, and the real impact of that seems to have been left for a future film.

Both the initial assault on the captive ship and Cap's escape from the Triskelion were some top notch action sequences.

As villain monologues go, Arnim Zola's was one of the better ones, simply because his long-winded exposition served the purpose of keeping Cap and Black Widow in place long enough for the strike against them.

I was genuinely surprised when Black Widow turned up in Pierce's office, even though, in hindsight, it was painfully obvious.

I'm still not sure how I feel about the Hydra reveal and the dismantling of SHIELD, especially as it pertains to the future of the MCU. I'm assuming they're setting up a scenario in which a more formally organized Avengers team, operating out of Stark Tower, steps up to fill the void, but I still think having some kind of SHIELD infrastructure in place isn't a bad thing (more on that below).

So the first post-credits scene gave us our first look at Baron Von Strucker, Quicksilver and Scarlet Witch. Since the Marvel films can't use the term "mutant", supposedly Hydra will be responsible for their powers. I'm curious if they'll still go with some kind of "related to a villain" setup even though Magneto also can't be mentioned.

The Simpsons: Luca$
I don't know what the hell the ending of this episode was all about. Marge was jealous of Homer going on a date with Lisa, a date she asked him to take her on? Even by modern day standards of The Simpsons, that was just bizarre.

Snakes name is given as "Albert Knickerbocker Aloysius Snake", or "AKA Snake". That's mildly funny.

Once Upon a Time:  It's Not Easy Being Green

Zelena has Charming's courage and wants Regina's heart...who in Storybrooke could possible have enough brains to finish the triumvirate and power her time travel spell?

Oy, the shoe-horning in of "wicked" is painful. "It's the wicked west"?!? That doesn't even make sense.

At least Emma can say she almost married the Wizard of Oz and not just a flying monkey...

Agents of SHIELD: Turn, Turn, Turn
Okay, that was a pretty big Winter Soldier tie-in. I mean, hopefully nobody watched this before watching the movie, because that would have spoiled some pretty big plot points (and to be clear, I'm not necessarily criticizing this - a crap ton more people watched the movie this weekend alone than watched this episode, and tying in to the film just makes sense - just pointing it out).

Credit where it's due: while we'd had Garrett pegged as the Clairvoyant almost from his first appearance, that Ward was on his side as well was genuinely surprising. It even makes his interactions with Skye slightly more interesting (since they were presumably all just part of his cover), which I wouldn't have thought possible.

I'm glad that Hand turned out to neither be the Clairvoyant nor part of Hydra (it became obvious once Garrett's insistence on killing her became so striking), since that was the easy way out, but on the other hand, I'm bummed they killed her off.

Winter Soldier made it sound like SHIELD was done and gone - this episode did a decent job of clarifying the sweep wasn't quite so final. Remnants are in place, certain facilities (like the Fridge) held by loyal agents. Not only does this create an avenue for the show to continue on (with Coulson and his team working to root out Hydra on limited but still existent SHIELD resources), it makes a fair amount of sense. I mean, Captain America's insistence that SHIELD be shut down is well-intentioned enough, but what happens to all the dangerous items and people they have on lockdown when you just fire everybody? Not only is it good for this series, but I think it's good for the MCU in general for some kind of SHIELD framework to remain in place, even if it isn't the gargantuan entity it has been.

Another thing this episode did that I appreciated: it suggested that the infiltration of Hydra wasn't quite as sweeping as the movie did (even if Pierce, the highest higher up, was in on it), and it also suggested that at least some people within SHIELD were aware enough of it not to be taken completely by surprise, which does a lot to maintain the credibility of what is supposed to be a super awesome spy agency.

Boy, that sure felt like a season premiere wedged into the final quarter of an existing season. Heck, it felt like a re-pilot more than anything (here's a show about a group of musically-inclined high school graduates trying to make it in the big city!).

Bleck, I'm not thrilled about Mercedes showing up in NY. She's probably my least favorite of the show's initial graduating class.

Where are Santana and Brittany? I know they were going to go on a trip to Lesbos and Hawaii before returning to the city, but this seemed to take place at least a few months after the last episode (Rachel having already completed an out-of-town Funny Girl tour).

Given that he's now the sole remaining character with a lick of common sense and a distaste for drama, I think Elliot/Starchild may be my new favorite character.

Community: Basic Story
Abed, the Dean and Annie spastically dancing over the discovery of buried treasure (or, rather, than buried treasure existed somewhere) was a thing of beauty.

It's a little thing, but I like that Jeff refers to the Dean as "Craig" since becoming a teacher.

I'm pretty sure the re-opened Shirley's Sandwiches should still be running at this point; even if not, I feel like we should have gotten more of a reaction from Shirley for the school getting bought out by Subway.

"Flu Season" is one of P&R's all time great episodes, so it would be tough to top that with a direct sequel. Wisely, this episode doesn't really try to directly recreate the first iteration (the flu is mentioned early on, then more or less forgotten), so while the end result still isn't an all time classic, it's doesn't suffer from direct comparisons to one.

Leslie having a kid is an obvious plot development, but still a good one for this show, both in terms of how it will affect her career aspirations and the way it will present her with someone else she can't fully control and strong-arm into her way of thinking.

Quotable Quotes
The Simpsons
Homer: Then that makes me the Jackie Robinson of the sport and you the racist Phillies manger.
Marge: Stop comparing me to Ben Chapman!

Parks and Recreation
Andy: This guy’s the worst! I mean, it sucks that they didn’t have ham, but you can’t treat your dad like that.
Newer Post Older Post Home
Posted by Austin Gorton at 12:00 PM