In a Nutshell
The X-Men return the Reavers stolen loot.

Plot
In their new Australian home, the X-Men train, with Madelyne tracking their actions via the town's computer system. As their exercise completes, Madelyne swears to track down the Marauders and make them pay for stealing her baby. Elsewhere in the town, Longshot is drawn through some tunnels by strange voices and discovers the Reavers' vault, containing all the loot they'd stolen through the years. His psychometric abilities making all the objects in the room come alive like ghosts and tell their stories, he is overwhelmed and falls unconscious. Days later, the X-Men attempt to clean up the mess left behind by the Reavers, while Rogue brings Gateway a picnic lunch. Shortly thereafter, Longshot awakens, telling the X-Men they need to return the objects stolen by the Reavers to their rightful owners as best they can. 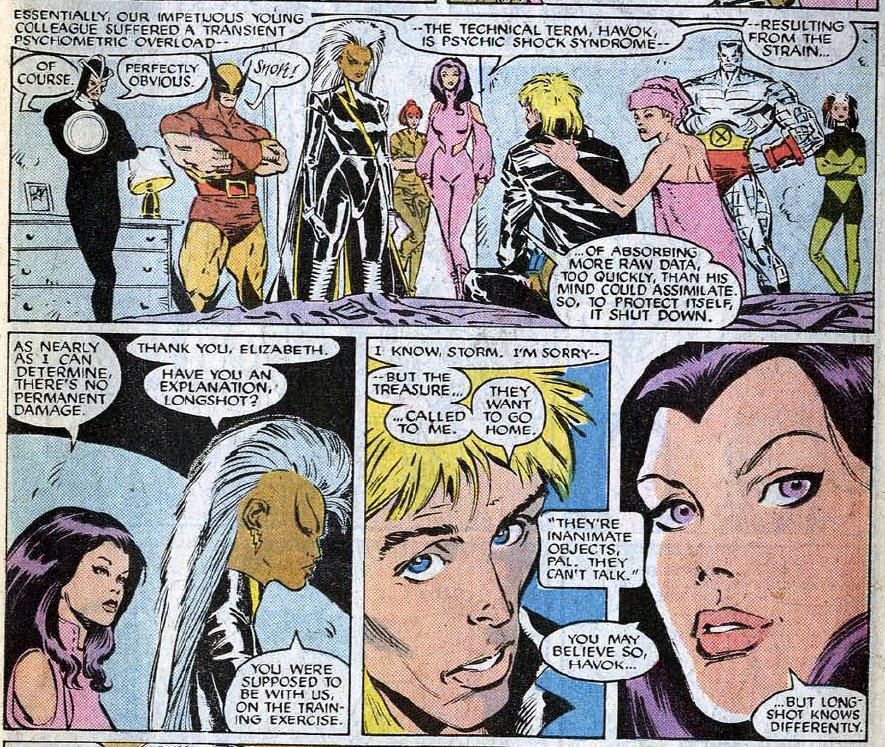 Though Wolverine argues that the X-Men have better things to do, he ultimately acquiesces, and the X-Men set about cataloging the objects, using a combination of Longshot's psychometry, Psylocke's telepathy, and Madelyne's computer skills. On Christmas Eve, they return all the stolen goods whose owners they could identify, via Gateway's teleportation portals. Passing over Salem Center, Storm creates a snowfall for the caroling New Mutants. Returning to their headquarters, the X-Men celebrate Christmas, with Storm and Wolverine giving the restless Dazzler a motorcycle left over from the Reavers' stash. Meanwhile, Rogue visits Gateway once more, bringing him a slice of cake and a flute. Though Gateway remains mute, he motions for Rogue to join him, and plays the flute for her.

Firsts and Other Notables
In addition to the X-Men returning the Reavers' stolen goods, this issue depicts the X-Men making the Reavers base feel more like a home. It also establishes that Madelyne has taken charge of running the computers at the X-Men's new base, and has already taken a shine to them. 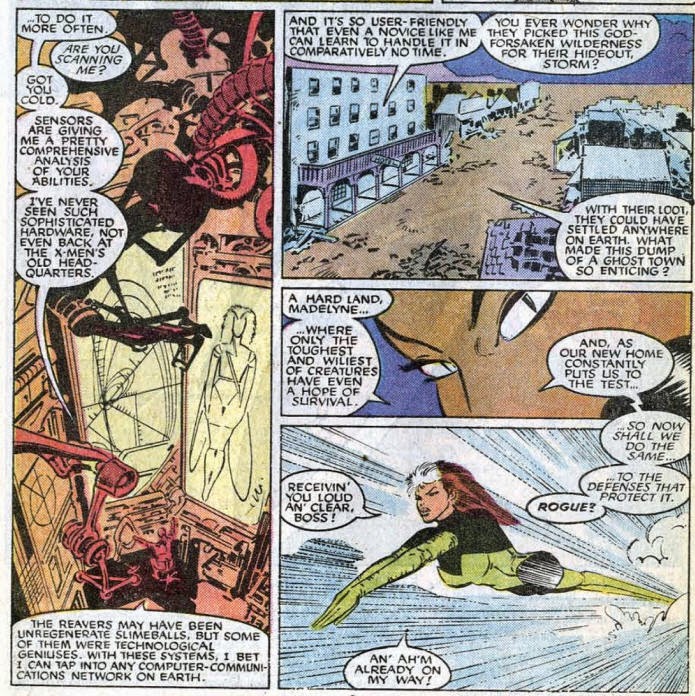 We also get what is essentially (in retrospect) the first "Inferno" tease.

Storm debuts a new look and costume this issue, combining elements of both her original costume and her punk attire (this is also the costume worn by her first action figure). With some subtle variations, this will remain her default appearance throughout the Outback Era, until her apparent death and reversion to childhood. 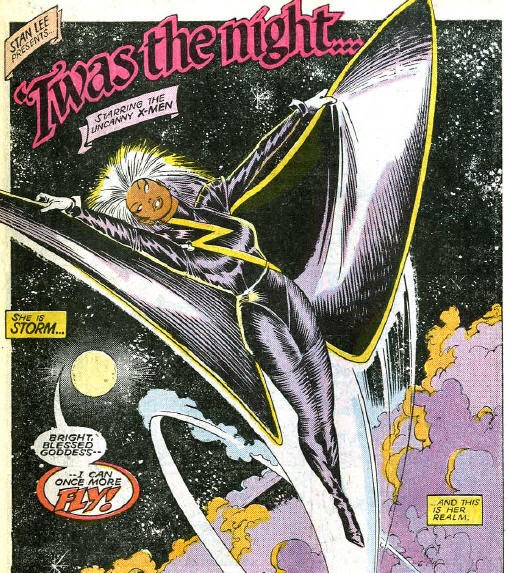 As discussed in the post on X-Factor #27, this issue is set at Christmas despite being on sale in February.

The Chronology Corner
Storm spots the New Mutants singing carols in Westchester; they appear here after issue #66 of their series.

Psylocke next appears in X-Factor Annual #3 (which we'll look at in a few weeks), before returning for issue #232.

The Official Marvel Index credits the woman appearing with Magneto and the New Mutants as being Moira, while I've always assumed it was the principal of the local school.

A Work in Progress
Dazzler spends most of this issue raging against the dirty, desolate town in which the X-Men are now living. Later, Wolverine and Storm give her a motorcycle found amongst the Reaver's loot (whose original owner couldn't be identified), which she'll be seen using on occasion during the Outback Era. 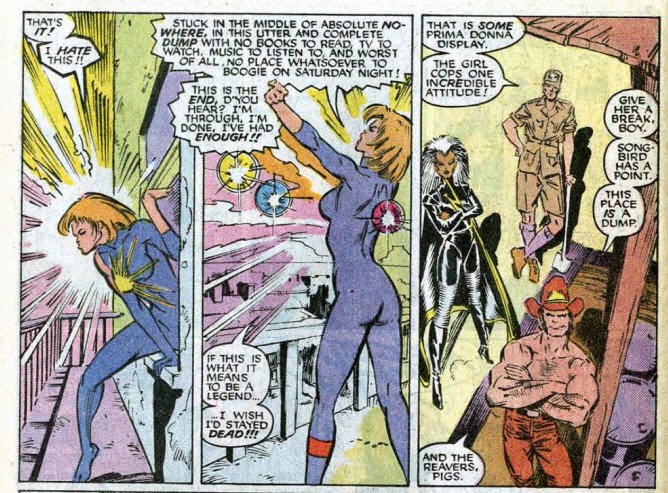 Longshot's psychometric powers (established in his limited series but little used thus far or after this issue) play a pivotal role in this story. 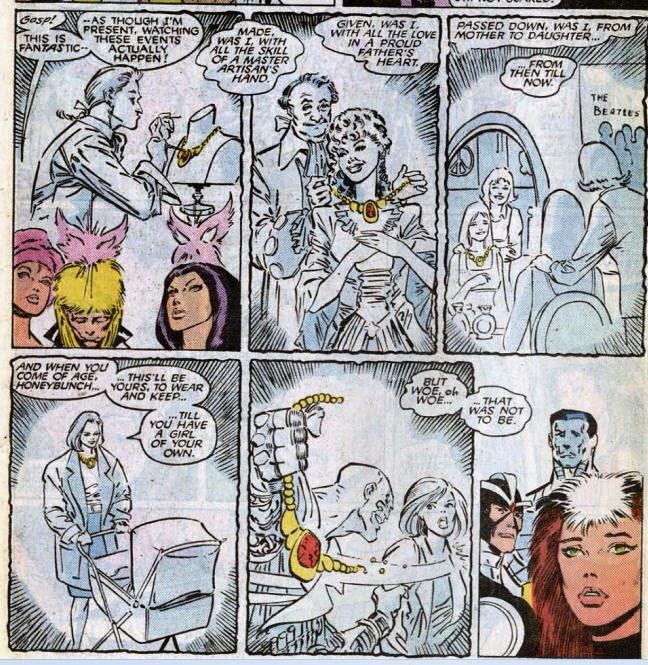 Wolverine justifiably argues that the X-Men have more important things to do than return all the Reavers stolen loot. 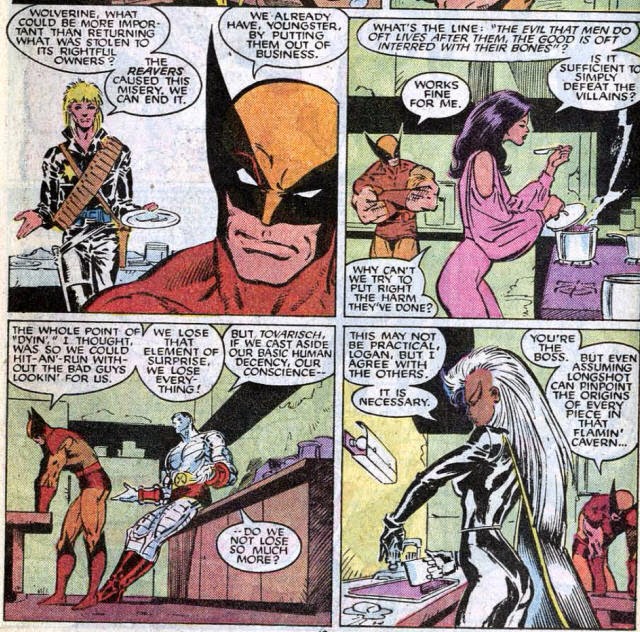 Using Gateway to teleport them somewhere for the first time, the X-Men question whether they can trust him.

Storm, overhearing Illyana mourning Doug and the X-Men, thinks it's better to cause her this pain than the pain of another dead teammate, and I'm not sure I follow her logic here. As far as Illyana is concerned, the X-Men, including her brother, are dead. If that belief saves one life, great, but that won't lessen Illyana's grief over the seven dead X-Men. 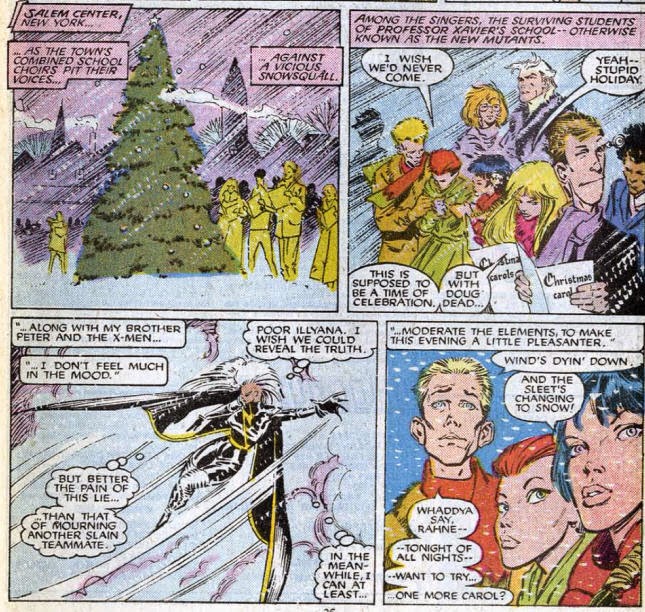 I Love the 80s
Rogue refers to aborigines as "you people". Stay classy, Rogue! 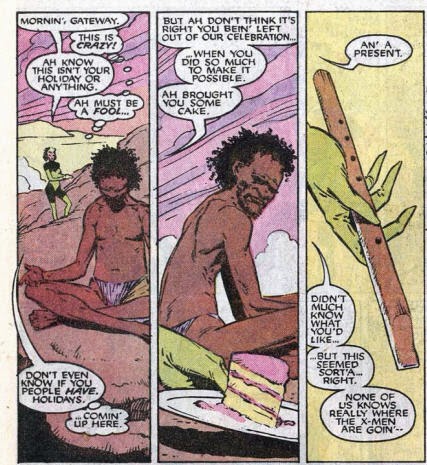 Claremontisms
After Wolverine defeats Rogue during their training sessions, he tells her "you dead". 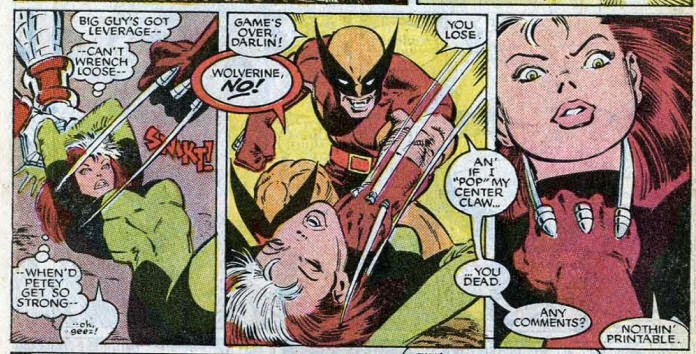 Artistic Achievements
This issue serves as a nice showcase for Silvestri's knack for body language: the triumphant way Madelyne kicks her feet up on the computer console after the training session, Havok's somewhat-signature "hand in one pocket, blasting with the other" look as he nonchalantly blasts the trash pile, Dazzler's physical disgust at the filth in the Reavers' town, Longshot's weariness after waking up. 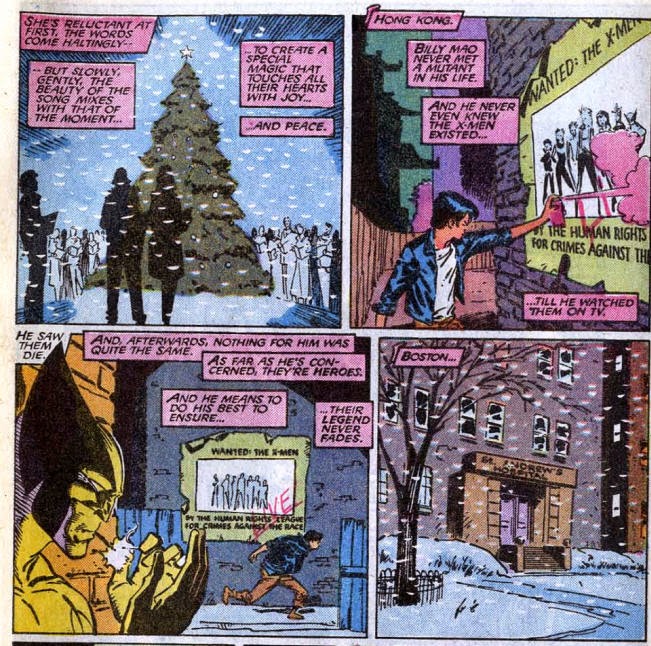 For Sale
The inside cover of this issue contains an ad for the Steel Brigade, a do-it-yourself GI Joe figure (comprised of, if I remember correctly, an Airborne body with a new head). Though I can't remember my figure's name, I do remember filling out the form and mailing away for one (I still have it with my other Joe figures, too). 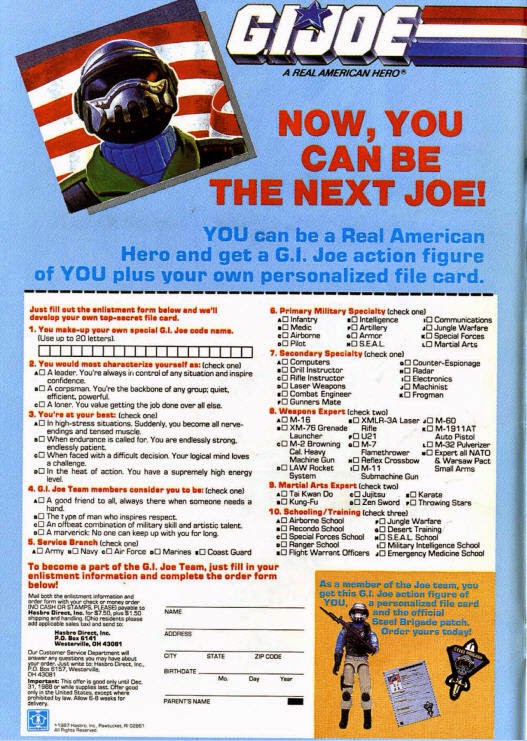 There's also a house ad for the current Avengers story arc, written by Walt Simonson (with, if memory serves, a lot of editorial direction), a lackluster affair in which Dr. Druid takes control of the team, leading to its effective dissolution for a time (you just know it's going to be a winning Avengers story when Dr. Druid and Marrina are involved...). 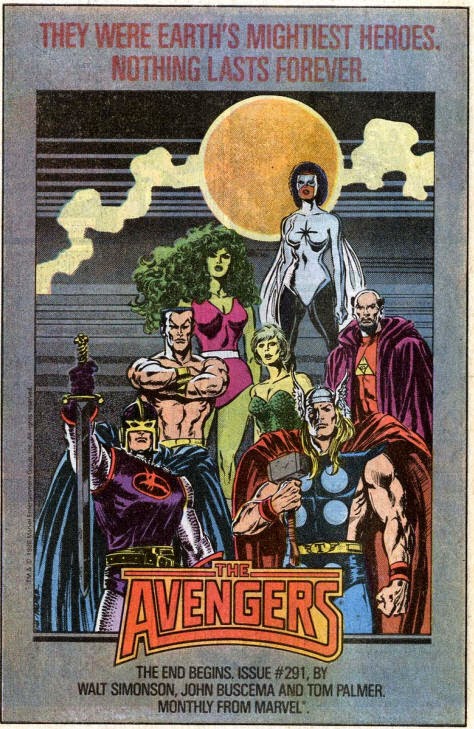 Teebore's Take
By all accounts, this story really shouldn't work. The X-Men, resurrected, rendered invisible to detection, newly-headquartered and thus prepared to strike out with impunity against their many foes, decide, for their first act as freshly-minted legends, to...play Santa Claus. But, for the most part, it does work, mainly because Claremont acknowledges (via Wolverine, of course) that it shouldn't, that the X-Men have better things to do. But in the end, it's decided that restoring the Reavers' stolen goods to their owners is a good thing worth doing (whether it's worth doing over tracking down Madelyne's son is more questionable, but we're edging ever closer to "Inferno" and Madelyne's transformation into a demon-inspired plot device, so it's hard to determine how much she should be pushing for that).

It also helps that this story is backed up by a character arc for Dazzler, as she, the least-isolated member of the team prior to becoming an X-Man, struggles with her new surroundings. It's your standard "upset at what you don't have but learn to appreciate what you do have" Christmas arc, but, again, I'm a sucker for these kinds of "spirit of the season" stories, and it does add a little something more to the story. I certainly wouldn't begrudge anyone who would rather the X-Men get about to punching the bad guys again, but this story is a nice reminder that sometimes, it's important for the heroes to do something beyond fighting the villains-du-jour, a rare chance for the X-Men to spread their legend by doing good instead of just battling evil.