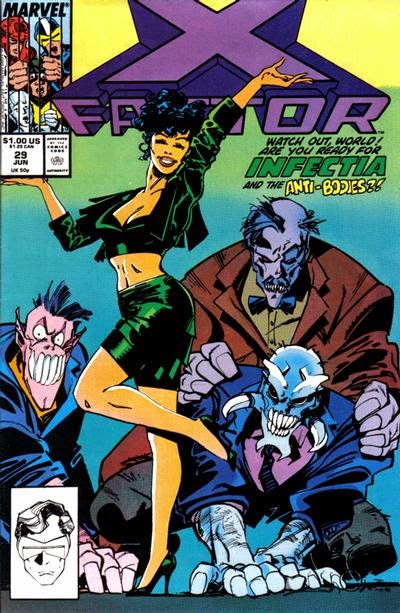 In a Nutshell
Infectia attacks as Ship moves out to sea.

Plot
At her apartment, Infectia watches in frustration as one of the men she's mutated burns out his power and dies, forcing her to make another. Later, X-Factor holds a press conference to announce the removal of Ship from the shoreline. In the process, the pier on which the media has gathered collapses, and X-Factor, along with Ship, is forced to rescue the reporters from the water. Watching the press conference at a bar, Infectia picks up another unsuspecting man. Back at the press conference, an increasingly-irate Cyclops excuses himself, followed by Marvel Girl, leaving Iceman to continue talking to the reporters as Beast and Trish Tilby reconnect. Meanwhile, Infectia brings her dupe back to her apartment, where she kisses him, her mutant power transforming him into a monster. Back at the ship, Cyclops and Marvel Girl prepare to move Ship out over the ocean as Infectia, along with three transformed men, watch from a nearby rooftop. 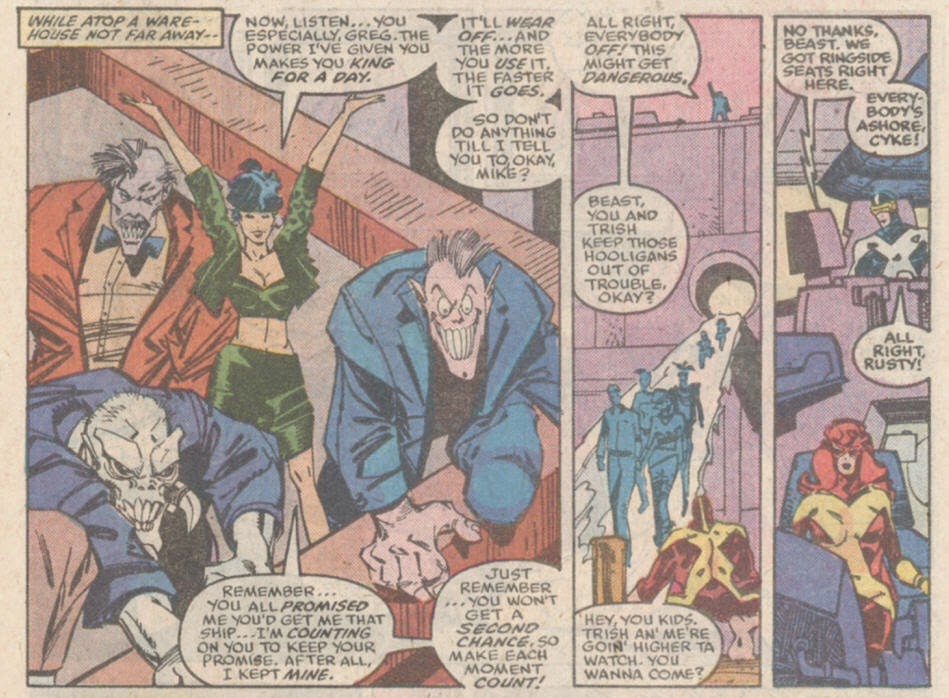 As the ship pulls out, Infectia's "Anti-Bodies" attack, trying to destroy X-Factor and claim the ship for Infectia. Nearby, Beast and Trish see the atttack, but are interrupted by Death, who swoops down and grabs Trish, demanding information about Candy. Trish tells him Candy informed her of Hodge's connections to an anti-mutant organization, and that when Trish looked into Hodge, she learned he had died, which prompts Death to fly off. Back at the ship, an increasingly-frustrated Marvel Girl unleashes her full power on the Anti-Bodies, causing them to burn out their power and return to their human forms before transforming into dust. Marvel Girl is horrified at having killed them. Watching, Infectia resolves that she'll just have to take the ship herself, and spying Iceman, realizes just how she's going to do it.

Firsts and Other Notables
Infectia makes her first full appearance in this issue. She is a relatively minor villain in the X-Men universe, appearing in this issue and the next two, then largely disappearing (though she does return for a relatively memorable sendoff in X-Men (vol. 2) #27, becoming one of the first notable victims of the Legacy Virus). We learn in this issue that she possesses the ability to alter molecular structures via her kiss, which she uses to transform hapless men into large monsters she calls "Anti-Bodies". Her goal in this story is to take control of Ship, for reasons unknown. 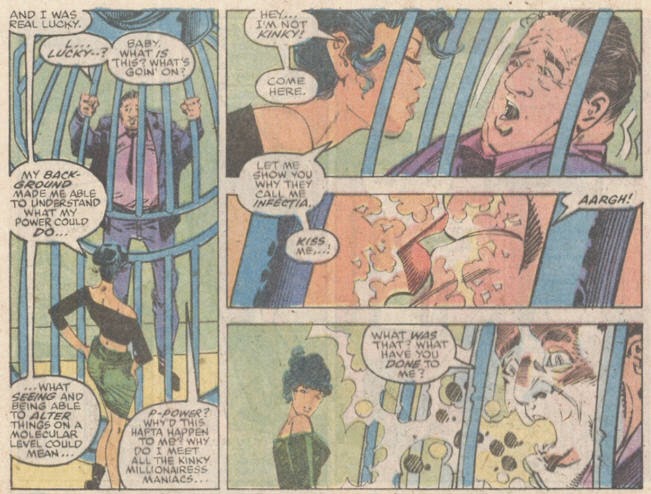 In order to allay concerns about Ship going rogue and/or becoming a target, it is moved away from the shoreline and out over the ocean this issue, where it will remain for the next dozen-and-a-half issues or so.

Angel, still responding to the name Death, grabs Trish and learns about her conversations with Candy Southern. He also learns about Hodge's apparent death in New Mutants #60 (incorrectly footnoted here as occurring in issue #59), though he wryly notes that plane crashes can be faked. 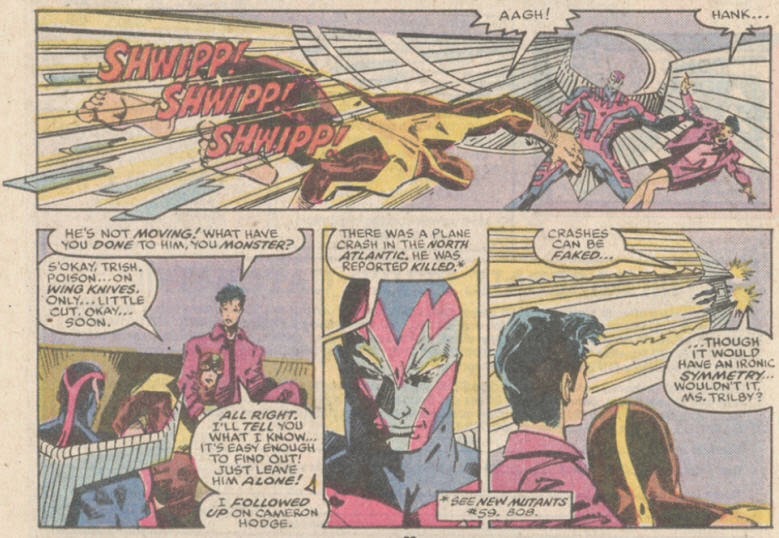 A Work in Progress
It's revealed in this issue that most of Angel's fortune has been lost due to the stock market and Apocalypse's attack on New York.

Jean is understandably upset when, after defeating the Anti-Bodies, they explode (a side-effect of Infectia's power), blaming herself for the death of innocent pawns.

"Professor Xavier Jean Grey is a jerk!"
First, Jean argues that Maddie should have told Scott she was still alive, even though she had no way of knowing Scott thought she was dead, considering he left her and never called. 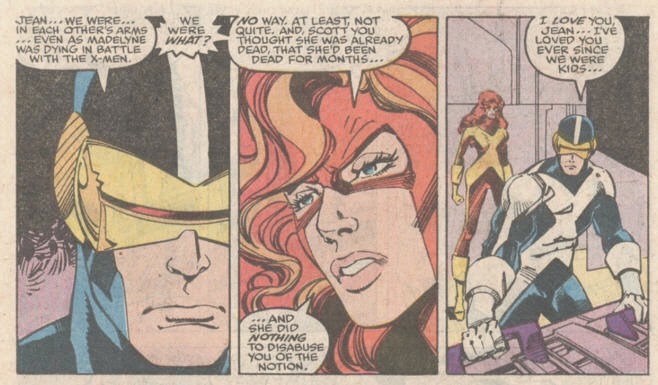 Then, Jean calls Maddie a hypocrite for not telling Scott where their baby is, even though, you know, her message is imploring Scott to find him (suggesting she doesn't know herself). 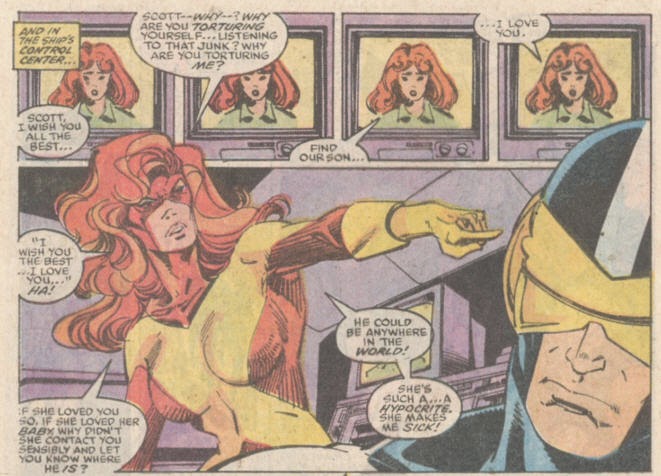 She goes on to call Maddie a jerk for putting Scott through the emotional wringer. 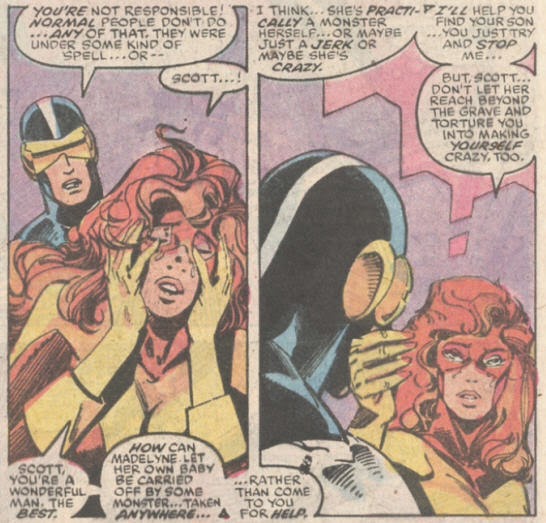 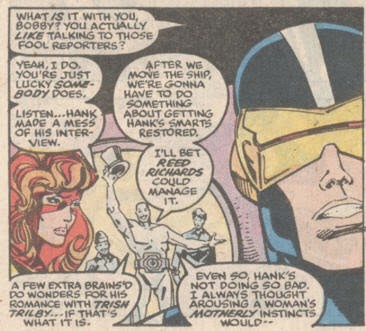 Human/Mutant Relations
Iceman stresses that all mutants can't be blamed for the actions of a villainous few.

Teebore's Take
And with that, we have the triumphant debut of Infectia! Haha, just kidding, she's mostly just a footnote in X-history at this point; if not for some truly awful new characters coming up in New Mutants, she might go down as one of Louise Simonson's more dubious creations. Instead, she's merely a forgettable, one-note antagonist, someone for X-Factor to fight in order to give this next batch of issues some action while more significant developments occur on the margins. So while X-Factor is busy fighting Infectia and her Anti-Bodies (not to be confused with the Animator's Ani-Men), the real meat of this issue is Jean's reactions to Madelyne's actions, in the wake of her constantly-repeating goodbye message to Scott.

Though most of Jean's issues with Maddie ring false because they ignore the fact that Scott left Madelyne, with barely any explanation, and then took up with his old chums and girlfriend for weeks on end with nary a phone call, what we're really seeing is the beginning, from X-Factor's perspective, of Madelyne's descent into Goblyn Queen-land, and thus the backhanded rehabilitation of Cyclops following his out-of-character behavior in the first issue of this series. While, from her perspective, Jean's reaction is slightly understandable (if misinformed), it also represents a subtle shift for the series. As we head into "Inferno", more and more, for better and worse, Scott will begin to blame himself less and less for the end of his marriage, while Madelyne will be forced to shoulder more of that burden.