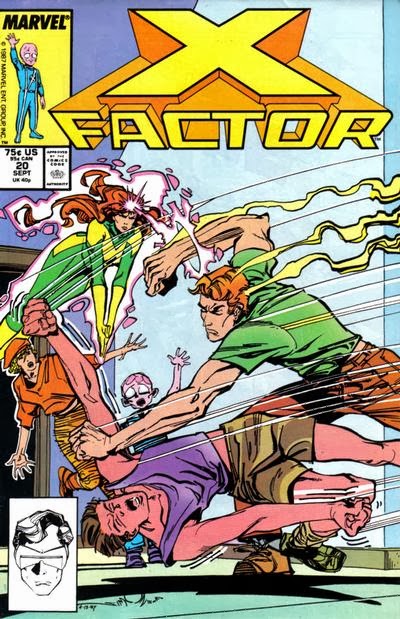 In a Nutshell
The X-Factor kids clean-up Central Park.

Plot
X-Factor returns home through the underground tunnels, Beast terribly ill from Pestilence's touch and Iceman frozen over. Their young charges help get Beast and Iceman settled in the infirmary as Rictor announces that Hodge has disappeared. Rusty decides he's going to sneak out and try to melt the ice Iceman left in Central Park, in order to prove to the world that mutants are capable of doing good, but Rictor tells him not to risk getting caught by the authorities for such a foolish gesture. Rusty calls Rictor a coward, and the two fight until Jean breaks them up. Later that night, a sleepless Rictor realizes Rusty was right, he was being cowardly, as Artie seeks out Rusty only to find him missing. 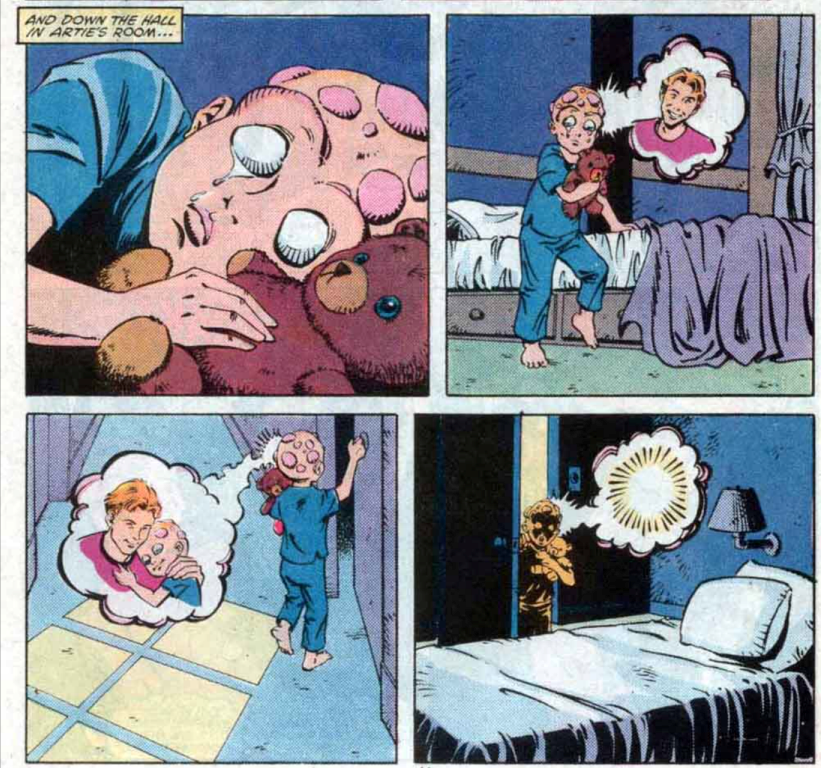 In Central Park, Rusty tries to melt the ice, but ends up drawing the attention of a gang of muggers and gets knocked out. At the X-Factor complex, Skids alerts Rictor as Artie projects an image of the unconscious Rusty. The three of them take a subway into the city, tearing up X-Factor ads on the train along the way. Arriving in the park, they chase off the gang and revive Rusty. Working together, the young mutants are able to remove all the ice in the park, save for a message they leave behind telling the world mutants were responsible for cleaning up the park.

Firsts and Other Notables
Like issue #16, this is effectively a fill-in issue starring the X-Factor kids.

June Brigman fills in on pencils for this issue, the same month she similarly filled in on New Mutants. That's certainly not unprecedented, but still kinda crazy.

The heads in the corner box on the cover are gone...

The Chronology Corner
This issue ends with X-Factor called in to investigate reports of a large gray mutant, setting up their appearance in Incredible Hulk #336-337, which takes place between this issue and the next (and during the time Hulk was once again gray, and not green). Those issues are notable for being written by future X-Factor writer Peter David and drawn by future Image Founder/toy magnate/owner of Mark McGwire's balls Todd MacFarlane, but beyond that, nothing much of note occurs regarding X-Factor.

A Work in Progress
It's mentioned that Rusty is still wanted by the government.

It's revealed that before the Right found him, Rictor accidentally destroyed a small town in Mexico using his powers. 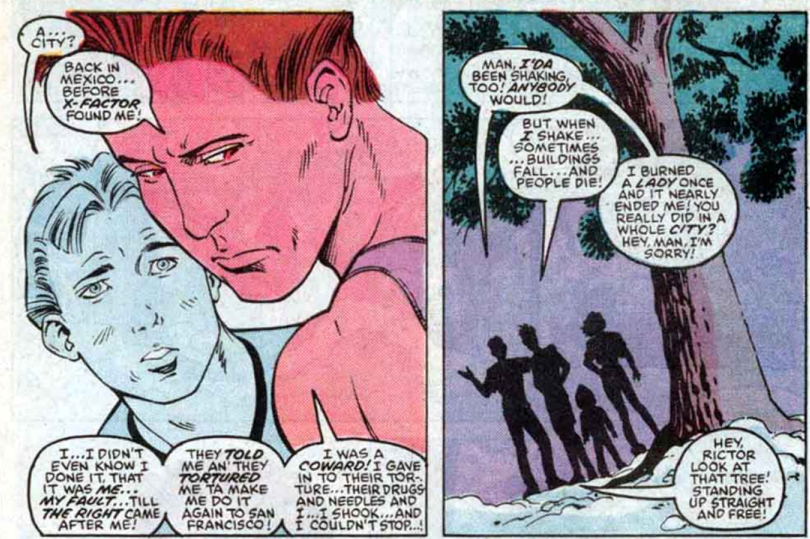 I Love the 80s
Maybe it's just me, but if Beast is so sick and possibly contagious, maybe his bed shouldn't be so close to Iceman's...

Rictor says that even in Mexico, the muggers of Central Park are legendary. The ensuing gang of criminals the X-Factor kids encounter are pretty much what you'd expect 80s criminals in New York to look like. 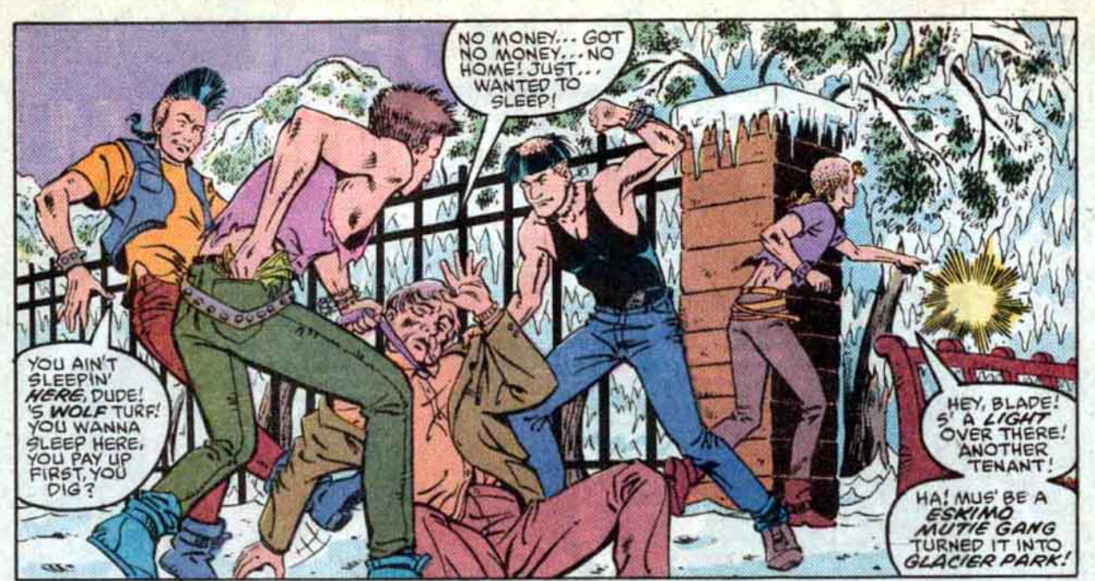 Human/Mutant Relations
At least one of the muggers is pretty anti-mutant.

By Their Deeds You Shall Know Them
Iceman beats himself up for freezing the park, saying he told everyone to judge mutants by their deeds, and all they do is destroy. This prompts Rusty to venture out into the park in order to try and melt the ice and prove mutants are capable of good deeds as well. 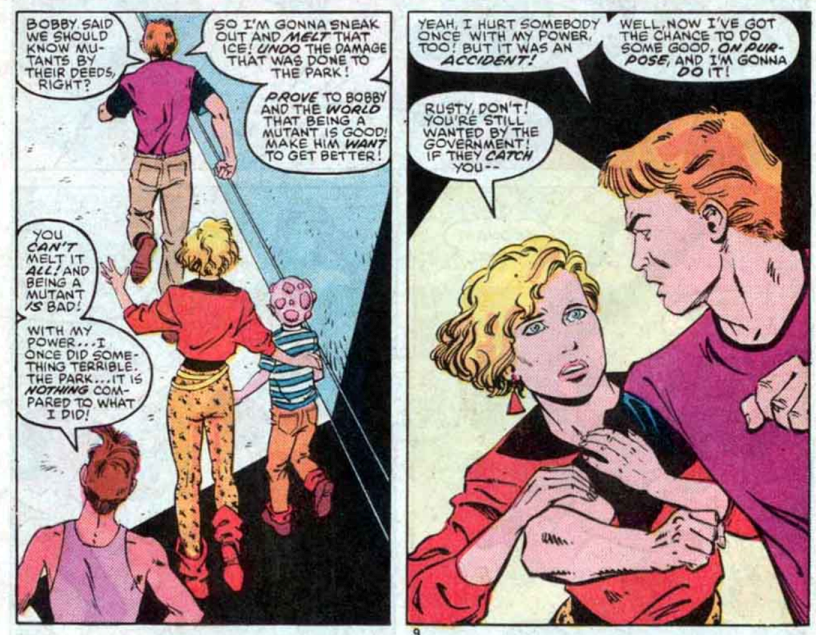 He does so, then leaves a message in the park:

Teebore's Take
Three issues after their last spotlight, the X-Factor kids take the spotlight once more, relegating the regular cast and the ongoing Hodge/Apocalypse/Right plots into the background. In theory, this is an effective use of a book's supporting cast, periodically elevating it out of its usual role as a way to break up the regular dynamic of the title, while also giving the supporting players some extra room to develop. In practice, though, it isn't always as effective. For one thing, these types of stories are usually seen as opportunity to give the regular artist a break, and while June Brigman's art here is effective enough, it lacks the energy and style of Walt Simonson (and even the crispness of her New Mutants issue from the same month). For another, this particular group of supporting characters isn't all that exciting. They're not bad characters, just...bland characters. Even Rictor, the newest member of the cast, who (wisely) gets something of a spotlight in this issue, goes through pretty much the same arc Skids did in the last "X-Factor Kids Fill-In" story, running scared from his power before learning to control it in order to help save Rusty.

But the real problem here is that this is the issue where Simonson really beats the whole "know mutants by their deeds" idea to death. I'd have to count, but I swear that phrase is uttered at least a half dozen times throughout the issue, and serves as the impetus of the plot: the public, angry at Iceman for freezing Central Park, motivates Rusty to go out and melt all that ice, to show mutants are capable of good deeds.

Except the public isn't judging mutants generically/generally (as the mantra implies), blaming all mutants for the actions of a few bad ones. The public is instead judging Iceman by the wrong deed - they're angry he wrecked the park, failing to see that he only did so to save their lives. The public IS knowing this mutant by his deed - it's just a narrow knowledge of Iceman's actions born of ignorance of the big picture. As a result, the actions of the X-Factor kids in this issue - going out and righting Iceman's perceived wrong - don't carry quite the punch that Simonson seems to think they do (the more accurate counterpoint would be to illustrate how Iceman's actions saved human lives), and the whole thing just points out that as well intentioned as the mantra may be, it's hopelessly simplistic.

Next Issue
Uncanny X-Men #222 wraps up the Marauders rematch, New Mutants #57 spends more time with Bird-Boy, and X-Factor #21 gets back to the Hodge plot.
Newer Post Older Post Home
Posted by Austin Gorton at 12:00 PM