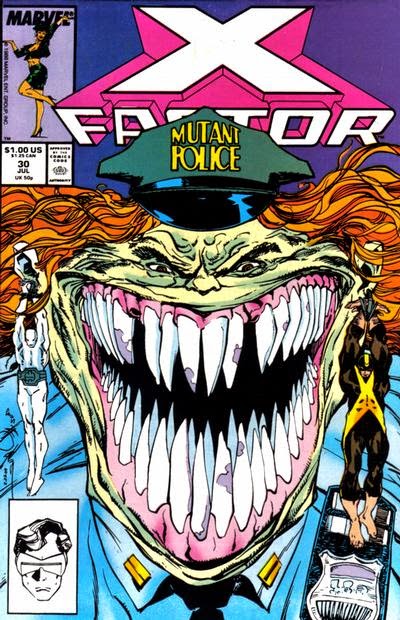 In a Nutshell
Infectia makes her move in Iceman.

Plot
Infectia watches from afar as Iceman and the kids play a game with one of Boom-Boom's timebombs on the deck of Ship. As Cyclops and Marvel Girl depart for Dallas to track down Cyclops' son, Cyclops admonishes Iceman for his immature behavior. After they leave, Iceman and Beast head into the city for a party at the Hard Rock Cafe. Beast, upset by the crowd, goes outside, where he spots Infectia using her power to transform a police officer into a monster. Meanwhile, in Dallas, Cyclops and Marvel Girl arrive to find Freedom Force waiting for them, while in Omaha, an armored figure lowers its ship over a house. Back in Manhattan, Infectia pretends to be chased by the monstrous cop into the Hard Rock Cafe, feigning fear and asking Iceman to protect her. 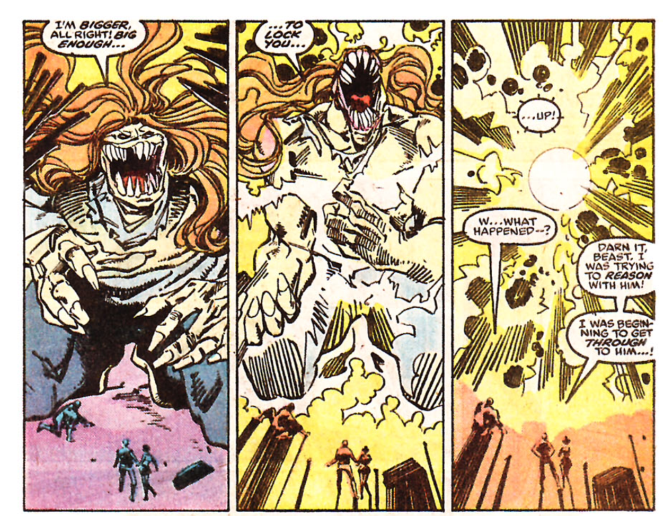 Iceman battles the creature, trying to prevent it from exploding like the other monsters X-Factor had recently fought, but when Beast joins the fray, trying to tell Iceman what he saw, the monster explodes. Elsewhere, Death breaks into a Worthington Industries facility, looking for information about the Right. In Dallas, Freedom Force confronts Cyclops and Marvel Girl, telling them they've failed to register per the Mutant Registration Act. In Manhattan, Infectia continues to charm Iceman, tricking him into taking her back to Ship. When they arrive, a smitten Iceman begins to show her around, much to the consternation of the kids, who immediately don't like her, and Beast, still angry that Iceman won't listen to him about what he saw. As Iceman and Infectia walk the deck in the moonlight, Infectia stops, leaning in for a kiss...

Firsts and Other Notables
This issue marks the first appearance of Nanny, who appears briefly in the shadows of two panel. We'll eventually learn she is a former Right scientist wearing egg-shaped armor, determined to capture children in order to protect them. She probably deserves to be labeled as Louise Simonson's worst creation, simply for how much she'll be used between now and the relaunch of the line relative to how interesting she is (as a character and a design), but I still think that "honor" belongs to someone like Bird-Brain or Gossamyr. 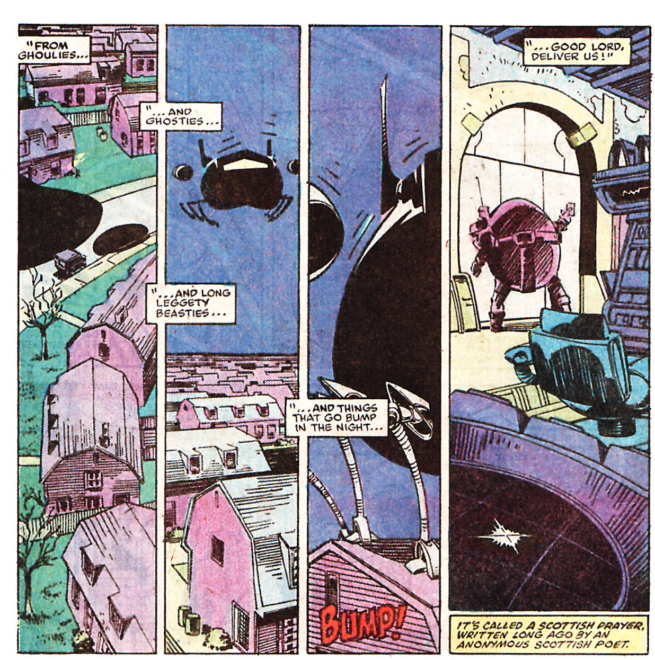 Angel's quest for Candy Southern takes him to Worthington Enterprises this issue, where he digs up information on the location of possible Right bases. 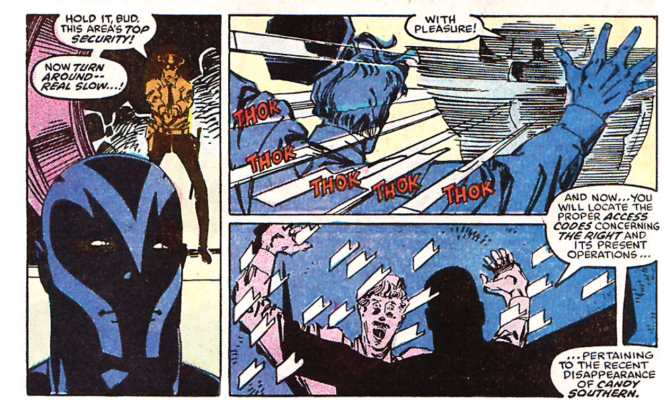 A Work in Progress
Iceman's reaction to Cyclops' crack about leaving the kids unsupervised is genuinely humorous. 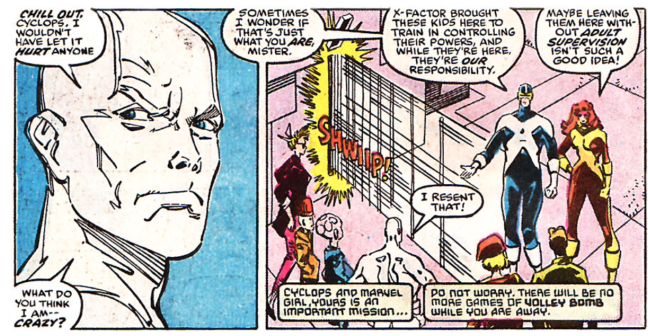 In a sign of X-Factor's growing popularity, it's revealed that Iceman is now making money off some advertising endorsements, though Ship provides the team with everything they need.

Jean notes that she's had no luck tracking down her missing sister or her kids. 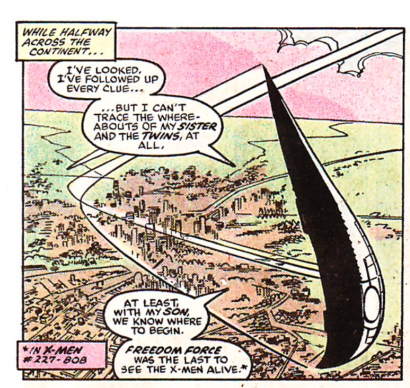 Cyclops acknowledges the death of his brother, and even comments on his relative lack of reaction up to this point.

Freedom Force, who may as well move their headquarters there by now, are still in Dallas. I'm fairly certain the events of this story have to occur after New Mutants #65.

Destiny notes that Marvel Girl is an anomaly, making her future unable to predict. I don't believe anything specific comes of this, so we can probably just chalk it up to all the weirdness Jean has experienced by this point.

I Love the 80s
In the absence of X-Factor, the kids are excited to spend the evening watching Rambo Nukes Commando in Nicaragua, which all else aside, would be a terrible title for a movie. 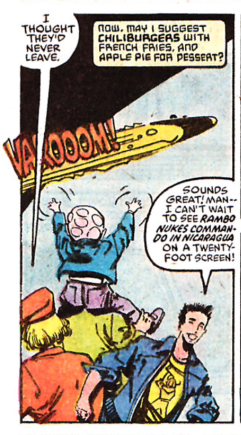 Iceman's statement that Ship provides him with everything he needs prompts a surprisingly baudy comment from a female admirer.

Iceman and Beast attend the opening of a Hard Rock Cafe, which is later referred to as "trendy", and shown to have its own bouncer. 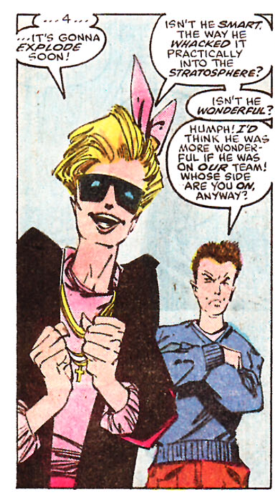 Human/Mutant Relations
The cop whom Infectia transforms believes all mutants belong in jail. 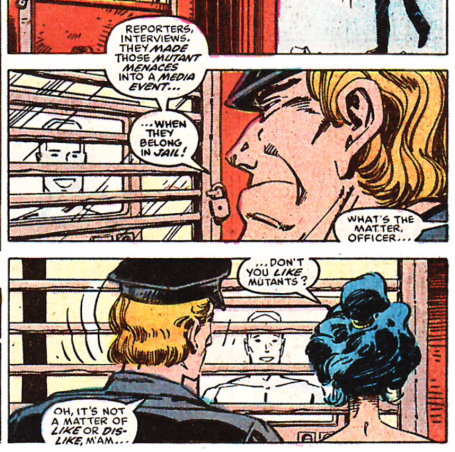 After defeating Infectia's monster, Iceman insists on posing for pictures for the media, saying it's for the good of human/mutant relations.

Teebore's Take
This issue continues the Infectia story while also moving forward Cyclop' quest for his son. Fortunately, it hits some different beats than the previous issue, with Infectia instead hitting on a gullible Iceman while using her power to create a monster to "attack" her. Meanwhile, Beast more or less catches Infectia in the act, but lacks the necessary intelligence to communicate that directly to Iceman (or to stand up for himself). There's plenty of entertaining characterization here, it's nice to see Iceman in the spotlight for once (even if he is being played like a chump), and I love Walt Simonson's rendition of Blob, but the story still suffers from the presence of Infectia. The biggest problem is that while her goal is very clear, we never really get a sense of exactly WHY she wants Ship so bad, other than because she does. As a result, though there remains fun bits on the margins of this story, it's a story which continues to succeed despite its chief conflict, rather than because of it.