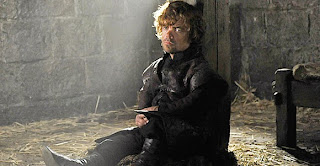 King's Landing
The episode starts quickly with Sansa being whisked away by Dontos. Tyrion is arrested as Tywin orders every guard to perform a hard-target search for Sansa in every gas station, residence, warehouse, farmhouse, henhouse, outhouse and doghouse in King’s Landing. However, the Stark girls have a knack for making quick and stealthy exits from King’s Landing so Sansa makes it to safety.

Safety, in this case, is a ship run by Baelish! Dontos expects gold for helping Sansa escape from King’s Landing. Instead he gets an arrow through the head. I’d say Dontos died doing what he loved but, really, I have no idea what Dontos loved doing.

Meanwhile, Margaery and Olenna discuss their current circumstances. Basically, Margaery is in a weird queenish limbo. But it sounds like neither of them are willing to give up on a Tyrell/Lannister alliance yet. I think Tommen is going to be a lucky boy. Well, if things really go his way he'll be a lucky MAN.

Speaking of Tommen, he and his mother are hanging out by Joffrey’s dead body. Tywin comes in and confirms that Tommen will soon be king. Tywin starts coaching Tommen and, frankly, Tommen does seem to have the temperament to be a good king. I’m just nervous about whose advising him.

Tywin and Tommen leaves as Jamie enters. Jamie and Cersei are sad over the death of their son. Cersei (stupidly) thinks Tyrion is the murderer and wants him dead. Jamie just wants a piece of Cersei. Jamie makes a move but Cersei resists. Then, well, I believe I watched a brother rape his sister next to their child’s cold dead body. Stay classy, Game of Thrones!

Oh, and then there’s this massive orgy. Tywin interrupts this penthouse forum story to have a discussion with Oberyn. After they dispense with their displeasantries (Oberyn still hates the Lannisters) Tywin offers Oberyn the opportunity to be a judge at Tyrion’s trial and a spot on the Small Council. Oberyn just wants to meet The Mountain to presumably kill him or at least get more information on who is truly responsible for ordering the rape and murder of his sister. Of course, once he got that information Oberyn would still probably kill The Mountain since it was The Mountain who actually did those things.

And finally, in King’s Landing, we check in on poor Tyrion who is locked up. The provider of pleasure know as Podrick comes in and they discuss the upcoming trial. Tyrion knows only that Cersei wouldn’t have anything to do with the murder. He also suspects that whoever helped Sansa escape did so in order to make Tyrion look guiltier.

Tyrion decides that he needs to talk to Jamie. Podrick drops the bomb that he was approached by a mysterious man asking him to lie at the trial in order to implicate Tyrion. If he did he’d be made a knight. Podrick’s prowess in the sack is well known but that doesn’t equate to street smarts because he declined the offer. Tyrion offered up the bad news that if these people couldn’t bribe Podrick they’d look to other ways of convincing him to do what they want. So Tyrion orders Podrick, for his own safety, to take his orgasm inducing show on the road.

Near Fairmarket (According to The Hound)
Arya and The Hound are bickering like an old married couple despite the fact that their burning passion for each other is still in its infancy. A farmer comes across this lover’s quarrel and Arya’s fast thinking (saying The Hound is an ex-soldier for House Tully) gets them invited over for dinner.

At dinner we learn The Hound has no patience for pre-dinner prayers. He wants his food and he wants it now! Arya expresses her displeasure at this but I’m sure deep down his boorishness just makes him more endearing.

Anyway, the farmer offers a job to The Hound who then accepts the offer in the form of beating up the farmer and taking his money. Oh that boyfriend of yours, Arya. What antics will he get into next?

Southish of The Wall
Ygritte hates boiled potatoes. Even mentioning them causes her to put an arrow through your head. After that, she and other wildlings will slaughter your entire potato-boiling village.

While the slaughter occurs one boy runs and "hides" under a table. He's found. The raiders let him live so he can go to Castle Black and tell the Night’s Watch what has happened.

The Wall
Sam realizes that Gilly is surrounded by a 100 men and most are criminals. Gilly is fairly naïve about the situation. Now, I sympathize with Sam’s plight but his solution leaves something to be desired. He takes her to Mole’s Town and drops Gilly off at an inn where, despite Sam’s insistence, I’m sure she’ll end up as a whore. Sam leaves and Gilly isn't impressed. Their I love yous are left unspoken.

Meanwhile, word of the village slaughter does indeed reach the Night’s Watch. They’d like to go attack the raiders but know that doing so would result in too many casualties and leave Castle Black vulnerable. They agree to stay and defend Castle Black until rangers return saying that Karl and his gang are hanging out up north dangerously close to Mance Rayder. If they come in contact with Mance and tell him there are only 100 men in Castle Black then Mance will attack with all his army’s might and the Night’s Watch would lose. At least, that’s how I heard it. Regardless, Jon Snow convinces everyone that some of them need to ride north and take care of the situation.

Dragonstone
Stannis is still hanging around. He receives news of Joffrey’s death and thinks its Melisandre’s leech curse that caused it. He’s also pissed at Davos for not getting him an army large enough to attack at this opportune time.

Davos promises to come up with something and then visits Shireen for reading lessons. Just as Davos is getting hooked on phonics he starts talking about the Iron Bank and gets an idea. He has Shireen write a letter for him pretending to be Stannis. I have no idea what his plan is but all I really want to know is what the Iron Bank’s interest rates are and I didn't find that out either!

Las Vegas
Daenerys is heading to the Luxor to do some gambling and maybe catch a Carrot Top show. Oh wait, that’s Meereen!?

Meereen
Daenerys takes her army to the gates. A champion comes out and insults Daenerys while taking a leak. That’s multitasking! Daenerys isn’t impressed but decides she should make an example out of him. She needs to choose her own champion to fight Meereen’s champion and chooses Daario because he’s the most expendable of the characters that have names. Soon enough, Meereen's champion learns a valuable lesson in not attempting to joust someone who is really good at throwing knives.

With Meereen's champion dead Daenerys then makes a speech. Basically, she’s a sexier Lincoln (if that’s possible) and Meereen slaves are the next on her list to be emancipated. She then uses catapults to fling barrels filled with broken slave collars over Meereen’s walls. The slaves see these collars. The wheels in their heads are turning and I believe they're evolving a plan.

Other Thoughts
The beginning with Sansa’s escape inter-cut with shots from the reception was filmed oddly. It almost felt like a “Previously On” but with all new scenes.

So Lord Baelish seems to be the one behind the death of Joffrey. My theory is he paid Dontos to poison Joffrey and help Sansa escape which would further implicate Tyrion and take the heat off of Baelish. Presumably, killing Joffrey is another step to world domination.

It is possible that Baelish had someone else poison Joffrey and Dontos was solely responsible for Sansa’s safety. Or even that Baelish merely heard of a plot to kill Joffrey and knew Sansa would be in danger and just wanted to save one of Catelyn’s daughter. But I suspect Baelish was behind the murder.

It would’ve been nice if we got to know a little more about Tommen before this episode.

The funeral rocks with eyes painted on them creep me out.

There was a question in my mind of if Jamie actually knew that Joffrey was his son. It’s now apparent he did.

I know The Hound was hungry but was it really that difficult to wait for a prayer before eating?

I know one hundred men hanging around one woman is dicey but, remember, Papa Smurf made it work out!

Is it just me or is Gilly showing more personality this season?

Remember when Stannis was going to fight the white walkers?

I'm glad Tywin mentioned the fact that there's a Targaryen conquering other lands with three dragons and recognizes how much shit they're in once she turns her attention to Westeros.

Tyrion has been framed before in such a way where his intelligence is insulted.
Quote from season 1: “What sort of imbecile arms an assassin with his own blade?”
Quote from this episode: “I would like to think if I were arranging a royal assassination I’d plan it in such a way that I wouldn’t be standing there gawking like a fool when the king died.”

When Daenerys was making her speech I was waiting for an arrow to fly though her head. OK, not really, but did Daenerys and her army know the exact distance to stand where arrows couldn’t hit them or did the Meereen archers get winded after one volley of arrows?

I've seen countless murders in Game of Thrones and I barely give it a second thought. I see one rape scene and I get incredibly uncomfortable. I'm not sure that says but that...doesn't seem quite right. But I suspect I'm not alone.

Lady Olenna: You may not have enjoyed watching him die but you enjoyed it more than you would’ve enjoyed being married to him. I can promise you that.

Gilly: They have other things to think about.
Sam: That’s the only thing they think about.

Davos: Your father lacks an appreciation of the finer points of bad behavior.

Tyrion: But say what you will of Cersei, she loves her children. She is the only one I’m certain had nothing to do with this murder. Which makes it unique as King’s Landing murders go.