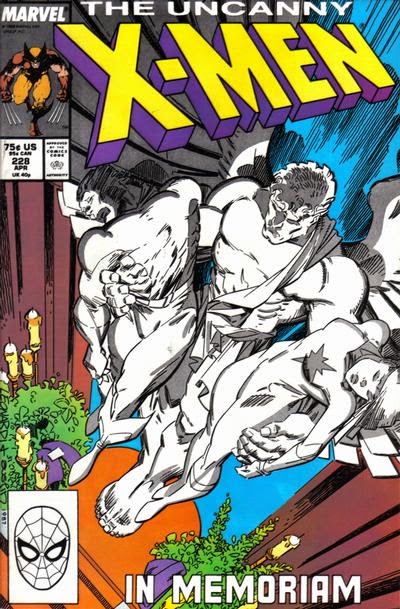 In a Nutshell
A pointless fill-in issue.

Plot
At a bar, O.Z. Chase reads a letter from Dazzler, detailing a recent adventure they shared: at the mansion, Dazzler learns that her old friend Chase has been arrested for murder and is believed to be a werewolf. She rushes to Florida to help him, reluctantly accepting help from Wolverine, who joins her. Arriving in Florida, they discover KGB agents are after Chase for information regarding his last job, and Wolverine breaks him out of prison so they can track down his last bounty: a Soviet mutant named Zaitsev, with whom Wolverine has tangled before, and who has set himself up as a drug lord after betraying both America and Russia. At their hotel, Dazzler, Wolverine and Chase are approached by Henry Gyrich, who requests that Zaitsev be taken alive and turned over to him. The trio track Zaitsev to a nearby swamp, and after Zaitsev dispatches the KGB agents, they attack, with Chases's dog Cerberus finishing Zaitsev off, despite Gyrich's orders. In the present, as Chase finishes the letter, a patron at the bar cheers the death of the X-Men, but Chase and Cerberus angrily force everyone to toast the X-Men. Later, in his truck, Chase gives one final, tearful toast to his friend Dazzler.

Firsts and Other Notables
This issue is a fill-in story told mostly in flashback involving Dazzler and Wolverine working together to help O.Z. Chase, a bounty hunter and supporting character from the very end of Dazzler's solo title (he first appeared in issue #38 of her series), take down a mutant Soviet spy, another in the long line of one-off incidental characters with whom Wolverine knows from or has tangled with in the past.

According to the Marvel Chronology Project, this is Chase's seventh and final appearance in comics to date.

This is the first issue of this series in forever in which Claremont is credited as only the scripter, not the full writer, as EiC Tom DeFalco contributes the plot. The involvement of DeFalco, who wrote a good chunk of Dazzler's solo series back in the day, probably explains the focus on Dazzler (Wolverine, of course, is involved because this is 1988 and he's Wolverine), though DeFalco didn't write the issues of Dazzler which featured Chase.

Wolverine mentions his past as a secret agent, and it's revealed that Henry Peter Gyrich (former Avengers government liasion, head of Project: Wideawake and colleague of Val Cooper) was his CIA contact during his time as a Canadian agent, something that I don't think ever gets referenced again.

The Art Adams-drawn Wolverine from the cover of Heroes For Hope pops up in the corner box.

The Chronology Corner
While the framing sequence takes place after the death of the X-Men last issue, the letter Chase is reading was written by Dazzler while she was Alcatraz with the X-Men, circa issue #223-#224, while the story she relays in that letter seems to take place between issues #220 and #221 (before the X-Men leave for San Fransisco), as Storm is absent but the X-Men are still at the mansion, though the Official Marvel Index considers it to take place between issues #218 and #219.

A Work in Progress
In the flashback story, Dazzler is still bristling about having been a solo act before joining the X-Men. 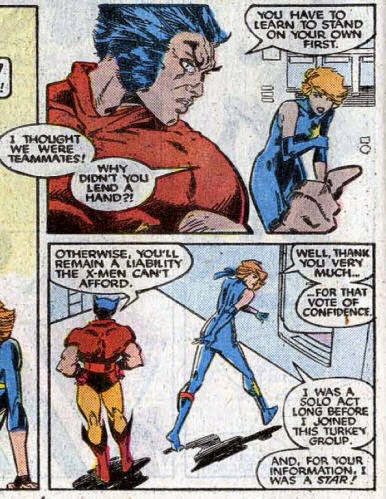 The issue ends with Chase toasting the dead X-Men. 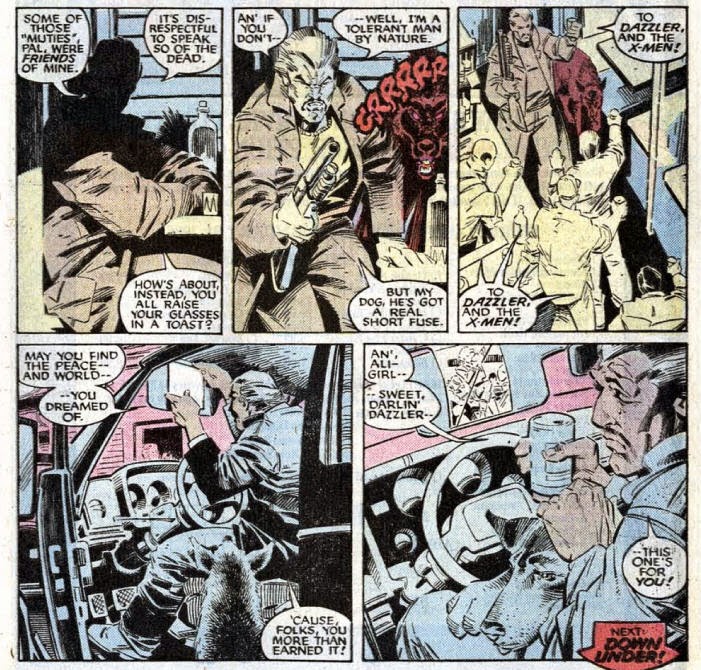 Claremontisms
Dazzler casually refers to some local cops as the "gendarmerie", a word choice which seems more like something Claremont would use than Dazzler.

Teebore's Take
It's understandable that after the grind of "Fall of the Mutants", including a double-sized issue, a fill-in would be required, but this is the most fill-in-y issue of all the possible fill-ins. There are a couple-three Claremont penned issues that I personally like less than this one (mainly because their art is terrible), but this is arguably the least-essential issue of Claremont's entire run, a simple story of Dazzler and Wolverine teaming up to help Dazzler's bounty hunter buddy O.Z. Chase take down a Soviet mutant spy. If you were a big fan of Dazzler's solo series, then I suppose seeing Chase again might be fun, but this is otherwise entirely inconsequential.

Even the most intriguing idea - that Henry Peter Gyrich was Wolverine's CIA handler back in his pre-X-Men espionage days - gets routinely ignored moving forward. And while the idea of showing an ancillary or supporting character react to the apparent death of the X-Men is a decent idea (hell, the formation of Excalibur is built around the idea), it only accounts for a handful of panels in a framing sequence, and if you asked me to make a list of the characters I'd like to see react to the death of the X-Men, O.Z. Chase (who doesn't even warrant his own Wikipedia page) wouldn't even crack the top 150.

Next Issue
Tomorrow, we catch up with Amara in New Mutants #62, and Friday, X-Factor celebrates Christmas in X-Factor #27. Next week, let the Australia jokes begin as the X-Men go down under in Uncanny X-Men #229.