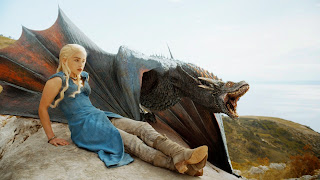 Well, for those of you that read The Walking Dead reviews are aware that Teebore had overextended himself and resorted to caffeine pills which ended in disastrous consequences. As a result, I took over reviewing some shows for him. One of those shows will be Game of Thrones. I will be keeping his format for the review for the most part because, well, it's easier than coming up with my own format.

Now, let it be known that Teebore is more perceptive, intelligent and drinks less than me so I have no doubt that my reviews will lack some of the smartiness you're used to. But I'm doing my best and, really, isn't that all that matters? (The answer is no. No, that isn't all that matters.)

Anyway, on with the review!

King's Landing
Most of the action of the episode takes place here. With Stannis “defeated” and Robb dead, Westeros is in a time of peace and the focus is now on the impending wedding between Margaery and Joffrey.

Jaime makes it clear to his father that he wants to stay in the King’s guard. Tywin isn't pleased about this. Jaime's motive to stay seems to be because he wants to continue banging his sister but I’m unclear if Tywin knows this is his reasoning.

Jaime is also confronted by Brienne who demands he honor his vow to keep the Stark children safe. Jaime correctly points out that Sansa is safest in King’s Landing. He also incorrectly points out that Arya is probably dead. I will say that it doesn't seem as though he's trying to weasel out of his vow just that he's not even sure what to do about it now.

Tyrion has become the Walmart greeter of King's Landing and is supposed to welcome Prince Doran Martell who is arriving for the wedding. However, it turns out Doran is not coming to the wedding and he has sent his brother Oberyn in his stead.

Tryrion finds Oberyn in the whorehouse giving Game of Thrones fans the T&A they've been missing the past year (provided these fans don’t have internet access). Oberyn gives us some backstory. Apparently his sister was married to Rhaegar Targaryen and bore children with him. Rhaegar then “ran off with another woman and started a war” and, in the end, the Lannister’s killed Oberyn’s sister and her children. So, yeah, bad blood.

Lady Olenna continues to be awesome even when doing something as mundane as picking out a necklace for Margaery. Brienne meets with Margaery to discuss Renly's death and vows revenge. Margaery seems unconcerned with this and is focused on Joffrey and the wedding. I’m not sure if this is a feint or just an example of Margaery's goal orientated nature. No sense in worrying about Renly when you're about to be queen.

Shockingly, the ever-growing Sansa is upset that her brother and mother were killed. Also, shockingly, Tyrion LANNISTER is unable to comfort her. She just wants to be alone. She does meet with Dontos Hollard (the knight whose life she convinced Joffrey to spare and who was, instead, turned him into a “fool”). He gives Sansa a necklace that is apparently a family heirloom. I can’t even begin to know where that’s headed, if anywhere.

Southish of The Wall
Ygritte argues with Tormund Giantsbane. The only thing notable about this exchange is that Tormund is convinced that if Ygritte wanted Jon Snow dead he'd be dead. I tend to agree. Aside from that, a man named Styr and his army arrived to join them. They seem fairly imposing and hairless.

The Wall
Jon Snow’s honesty knows no bounds. He tells a Night's Watch council everything he's done. For the most part I understand but I think the part about him getting it on with Ygritte falls under the heading of TMI. Especially since that's the information that is most likely to get him beheaded. He doesn't get punished, though, because Jon Snow has a heartbeat and don’t you think the Night’s Watch needs all the warm bodies it can muster?

Nearish Meereen
Daenerys is cuddling with her dragons. Which I will say is better than when she was looking for her dragons. Oh, and most of her underlings want to get with her. Not that I blame them. But Grey Worm has the distinct disadvantage of being castrated. Regardless, Daenerys is having none of it from any of them...for now.

Daenerys and her army are on their way to liberate/conquer Meereen when she comes across a mile marker with a dead woman attached. Daenerys' resolve is unshaken as she claims she wants to see each dead body on her path to the city. I’m not sure if these dead bodies are a message to Daenerys or just something Meereen likes to do.

On The Road
The budding romance between the Hound and Arya continues to grow. The Hound says he wants to ransom Arya to her Aunt Lysa but we all know his icy heart will melt before then. They come across a tavern (or something). Patrons of this tavern are the ruffians who stole Arya’s sword, Needle, and killed her friend. Yup, they’re all dead and Arya got Needle back, obtained a horse and her heart probably pounds a little faster when she gets near the Hound.

Other Thoughts
This episode didn't have much pizazz to it. I suspect the main purpose was just to get the viewer reacquainted with where all the characters were at.

However, we didn’t get an update on where Stannis Baratheon was nor what the now split up group of Bran, Rickon, Hodor, Osha and company were up to.

We also didn't get an update on what's going on with Theon but since the answer is probably torture I’m more thankful for the lack of update more than anything else.

In the “Previously On” portion of the episode, Cersei declared she’s not a "broodmare." Nobody likes to be a broodmare, right Tracy?

Is this the first episode that had an actual scene before the opening credits? Or has it been so long since last season that I forgot how the episode structure works?

In that opening scene, I assume that was Robb's sword that was melted down? It looks like two swords were made. I wonder where the second one went? Or did I miss that?

If I have my Westeros history right, Oberyn's sister's husband, Rhaegar Targaryen (heir to the throne) ran off with Ned Stark's sister. Ned believed Rhaegar kidnapped his sister and this is what started the war that was mentioned that ended with Robert Baratheon taking the throne. However, I'm not discounting the idea that Ned's sister willingly went with Rhaegar.

Jaime got himself a bona fide Army of Darkness hand…with less points of articulation.

Jaime’s awfully confident he can fight with his left hand. I've tried writing with my left hand once, it didn't go well. Then again, there probably isn't much Jaime isn't confident he could do.

If I’m not mistaken, I think after Jaime’s conversation with Joffrey he'd like to put his nickname to good use.

I feel as though the Hound’s needling (pun intended) of Arya regarding her "wanting a pony" feels like too much of a modern day, real world trope.

After stabbing that guy in the throat, Arya gave a smile that made me wonder, despite the obvious electricity between her and the Hound, if Joffrey might not be a better fit for her.

Tyrion: She wanted to have me executed, but I admired her.