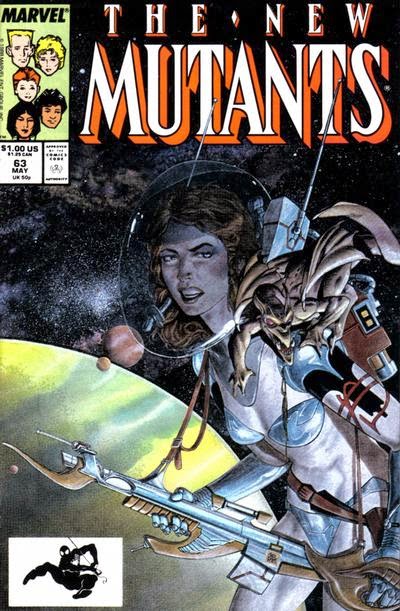 In a Nutshell
An untold tale of Magik (sort of).

Plot
At the X-Mansion, Illyana tells Kitty how she acquired the spacesuit hanging in her closet. When Warlock first landed on Earth and infected Illyana with the Transmode virus, she and Lockheed teleported to Limbo. Once there, she cast a spell to cure herself of the virus, but passed out when she tried to return home. Waking up back at the mansion, she was confronted by the X-Men all of whom, including Kitty and Colossus, didn't recognize her. Sneaking around with Lockheed, she discovered she was on a spaceship, with the group's "Professor X" a Brood who had created clones of the X-Men to use as host bodies. Donning the spacesuit and weaponry of one of the ship's deceased crewmen, Illyana revealed the truth to the X-Men clones, and together they defeated the Brood. Illyana then teleported the clones to Limbo, curing them of their Brood infection, then sent them back to the spaceship to guard its cryogenically frozen passengers. As her story ends, Illyana wakes up, the conversation with Kitty having been a dream. Taking it as a sign, she realizes that while her magic can't bring back the X-Men, she can use it to kill the monster responsible for their death: Forge.

Firsts and Other Notables
In New Mutants #21, after Warlock crashed to Earth during the New Mutants' slumber party, at one point Illyana teleported away. After Warlock had been calmed down and peace made, she then reappeared, wearing a space suit and carrying a gun. This issue, then, tells the tale of what she experienced while away from the mansion at that time. Sort of. 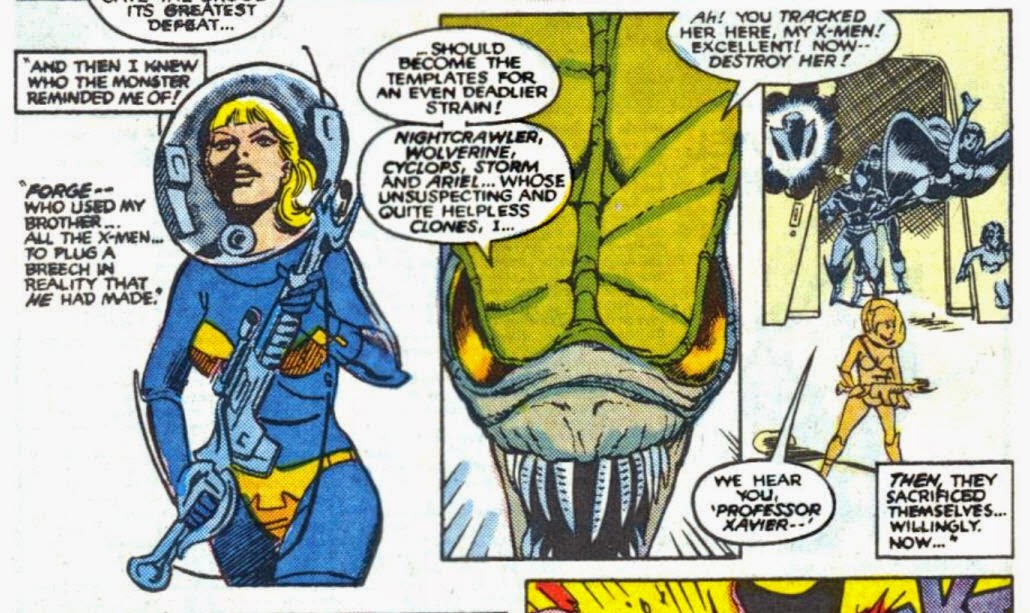 Chris Claremont gets a plotting credit in this issue, his first credit on the title since leaving after issue #54. However, presumably because Claremont's original plot involved a framing device of Illyana telling this story to Kitty, Simonson is forced to add an additional framing device, since Kitty and Illyana are no longer living in the mansion together. So this issue is instead Illyana dreaming about telling Kitty about her adventure, with the bulk of the issue then the story which Dream Illyana is telling Dream Kitty. Inception, eat your heart out.

As a result, it's unclear if what we're reading here is what really happened (for what that's worth) to Illyana during the events of issue #21, or just a fabrication of Illyana's subconscious, and so for the second month in a row (after Uncanny X-Men #228), we get a fill-in story featuring a dubious and overly complicated framing device.

Art comes from Bo Hampton and Josef Rubinstein. I'm not terribly familiar with the former's work, but the art in this issue does bear some resemblance to Rubinstein's work inking Dave Cockrum.

Great cover, though I'm not sure why the clearly-brunette Kitty is featured and not Illyana.

The issue ends with Illyana waking from her dream an deciding that Forge is responsible for the deaths of the X-Men; this will be followed up on in issue #65-66.

A Work in Progress
In the course of her adventure, Illyana wishes Doug was there to help translate - perhaps an attempt by Simonson to remind readers how useful Doug was? 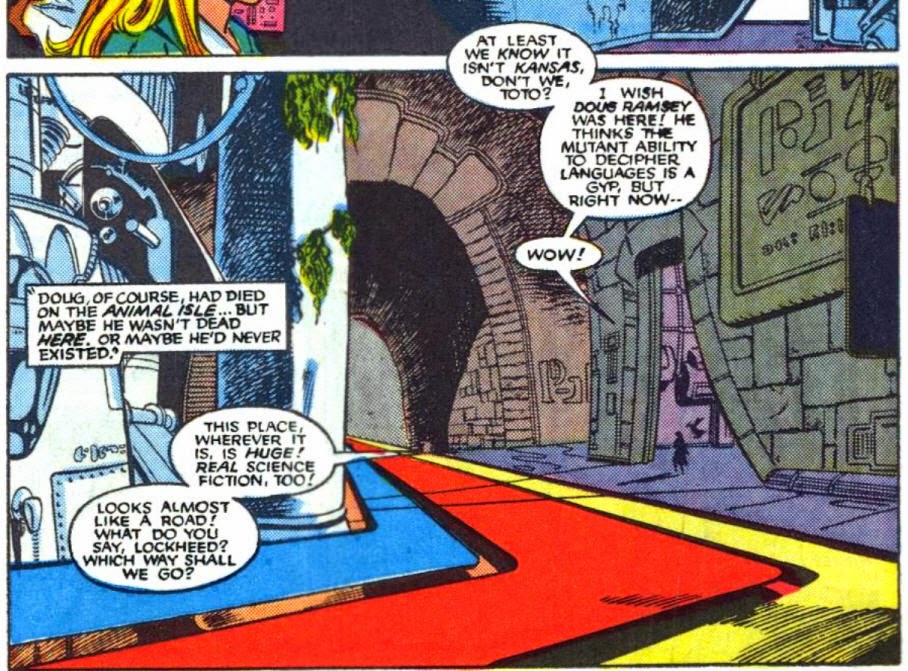 I Love the 80s
The slumber party from New Mutants #21 is referred to as a "spend-the-night" party. Is that, like, a term people use? I've always heard such things called "slumber parties" or "sleepovers", but maybe those are regionalisms/contemporary terms? 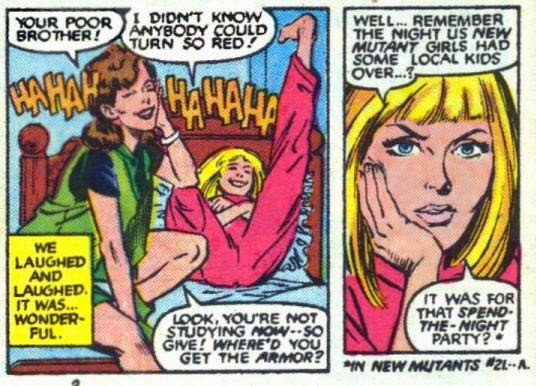 Teebore's Take
This is just an odd issue. On the surface, there's nothing wrong with going back and telling the story of how Illyana ended up in a spacesuit wielding a ray gun in issue #21. As fill-in stories go, filling in an untold tale certainly adds to the narrative more than a re-appropriated inventory story like X-Men #228. But then there's the curious decision of making the story we're reading a recounting of the tale, and the recounting of that tale a dream of Illyana's, leading us to question whether what we're reading is what actually happened to Illyana, or just a creation of this dream.

Obviously, the "tell Kitty the tale" part of the story was envisioned before Kitty and the New Mutants were split apart, but the whole dream element just seems to be adding an unnecessary complication to an otherwise straighforward story (if nothing else, I'd think it'd be easier to rework the framing sequence so that Illyana could be telling this tale to Kitty over the phone or something. Or just have it be set in the past). Toss in some uninspiring art and the fact that this is the second consecutive New Mutants fill-in (and the third such issue in two months if you're also reading Uncanny), and it's hard to get too excited about this, even if the intention is good enough.