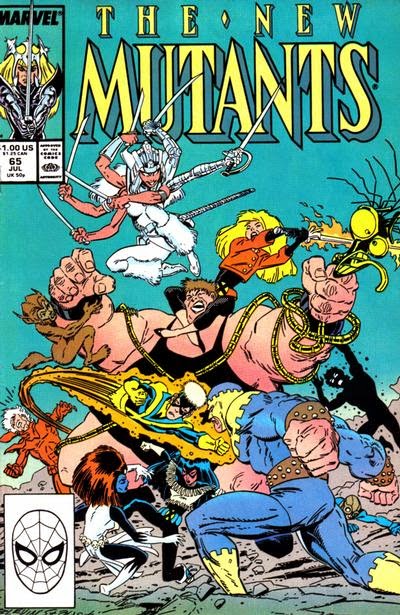 In a Nutshell
The New Mutants fight Freedom Force.

Plot
Illyana approaches Magneto, asking for his help in killing Forge to avenge the deaths of the X-Men, but Magneto refuses, saying that the X-Men died willingly, and that they are not his charges. He reminds the team that they are grounded, but this doesn't stop Illyana from teleporting away. She arrives on Muir Isle and reunites with Kitty Pryde, hoping to enlist Kitty's help. But she too tries to talk Illyana down, and Illyana teleports away in anger. Back at the mansion, the remaining New Mutants are split over whether to help Illyana, but when she appears to grab her costume, they quickly follow her to Limbo. Though still unwilling to kill Forge, the New Mutants agree to help Illyana, if only to prevent her from being killed herself. Drawing her Soul Sword, thus ceding control of Limbo to S'ym for the time being, she teleports the team to Dallas, where they find Forge and Freedom Force waiting for them. 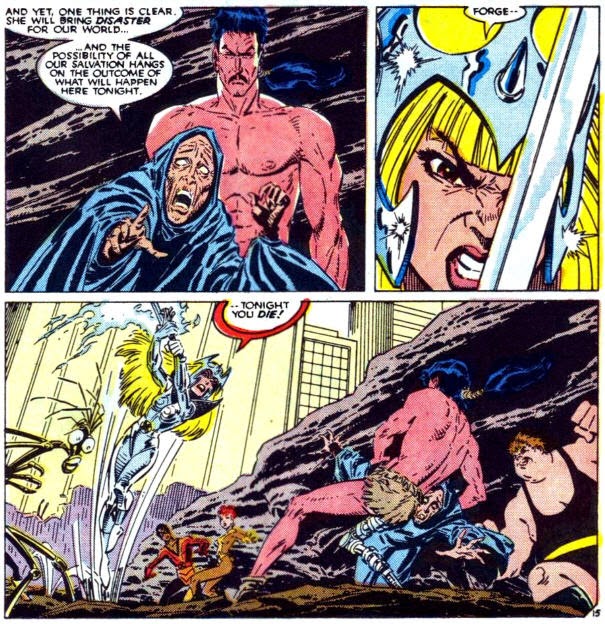 When Illyana attacks Forge with her Soul Sword, Freedom Force steps in to defend him, triggering a melee between the two teams. In the course of the battle, Illyana manages to corner Forge, but is stopped from delivering a killing blow by Sam, after which it's revealed that Forge was actually Mystique in disguise. With the New Mutants defeated, Spiral prepares to kill Illyana, but Destiny stops her, saying that Illyana is fated to unleash a great disaster on the world, and that killing her now will only hasten it. The only way to prevent it is to allow Illyana to go, in the hopes that she will learn and change course. As the New Mutants regroup, Illyana expresses disbelief at Destiny's prediction, believing Freedom Force would say anything to protect Forge. Just then, the real Forge appears, and Illyana teleports the New Mutants to his side. But Destiny holds back Freedom Force, saying they've done all that they can, that now the Darkchilde must follow her destiny, with the fate of the world hanging in the balance.

Firsts and Other Notables
This issue represents the first meeting between the New Mutants and Freedom Force.

Illyana teleports herself to Scotland to meet with Kitty and discuss her "Forge killing" plan with her (which Kitty is, not surprisingly, opposed to) in this issue. This represents the last interaction between the characters before "Inferno" and Illyana's de-aging. 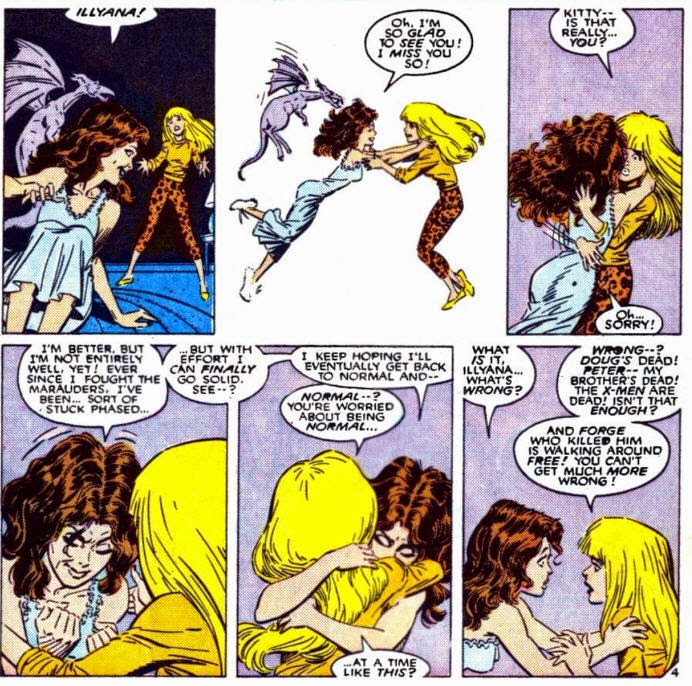 We also learn that Kitty has been made aware of Doug's death (Magneto phoned Moira), an underplayed response to the death of a character who was first introduced as a friend and possible love interest of Kitty's. 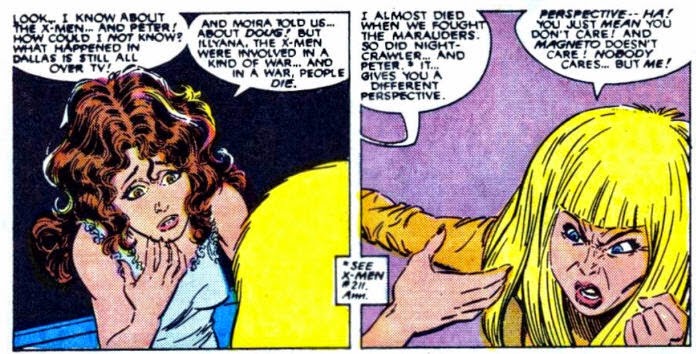 S'ym notes the irony of Illyana being so bothered by Forge's portal when he's planning on opening an even bigger one, more "Inferno" foreshadowing.

A Work in Progress
Illyana, angry that Magneto won't help her attack Forge, tells him he's not fit to be in charge of a bunch of hamsters. 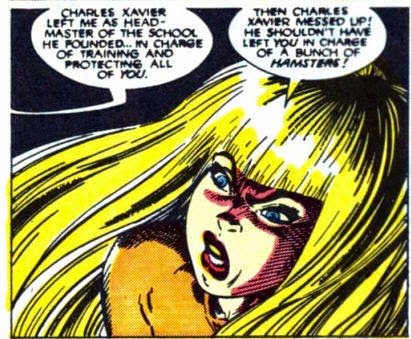 Limbo, which is a reflection of Illyana, has grown darker since the last time the New Mutants were there, as a result of the darkness growing inside Illyana. 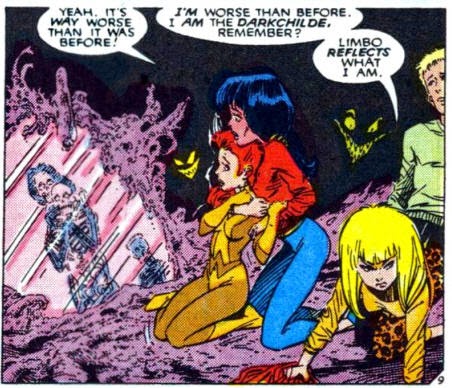 In a discussion that reads very much like an attempt to cover up a possible plot hole, Dani notes that when in the midst of a battle, her death glow (the ability to see when someone is about to die) flickers on and off as danger waxes and wanes, making it useless as a defensive tool. 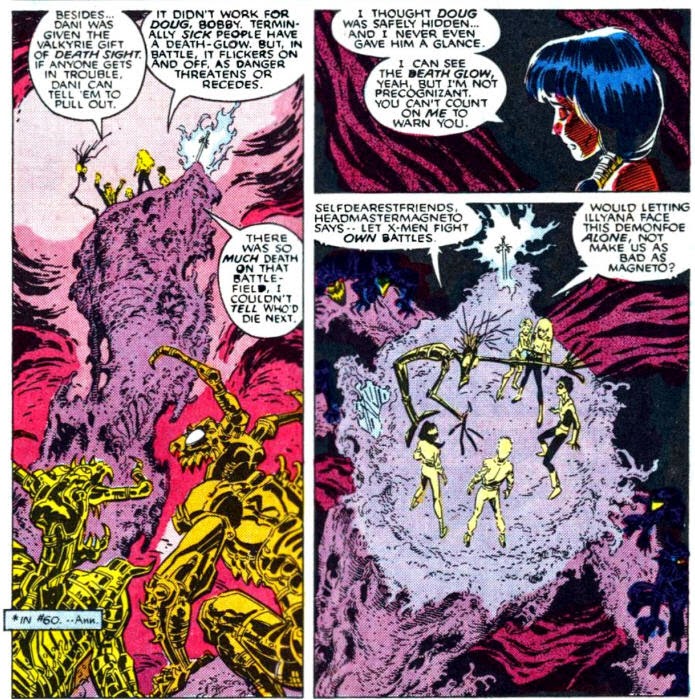 In a funny moment, Destiny allows a brick wall to crash onto Spiral even though she saw it coming, just to take some of the starch out of Spiral. 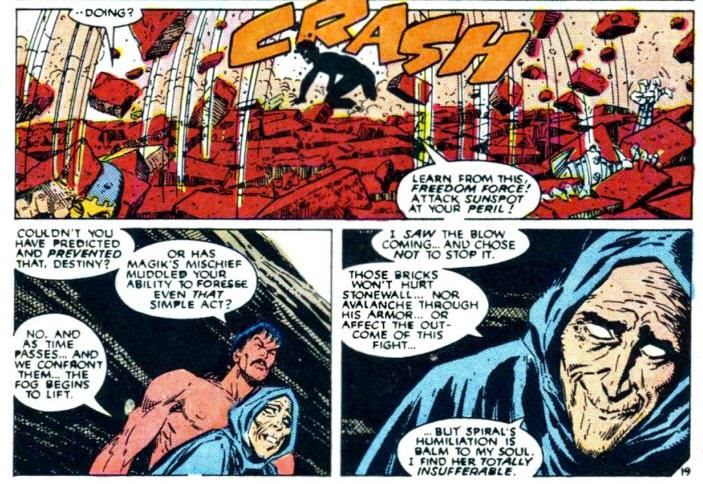 Towards the end of the fight with Freedom Force, Sam asserts that the New Mutants didn't start it. Except they did. Completely. When Illyana tried to kill Forge after being told he was under Freedom Force's protection. 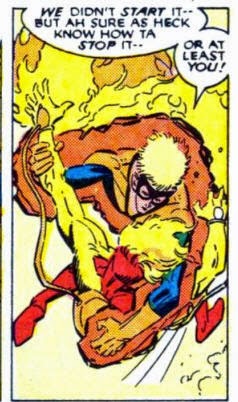 The New Mutants do refer to themselves as "muties" in this issue.

At one point Dani projects an image of Destiny's greatest fear, her prediction of the course of events Illyana may trigger, which looks a lot like some of the events of "Inferno". 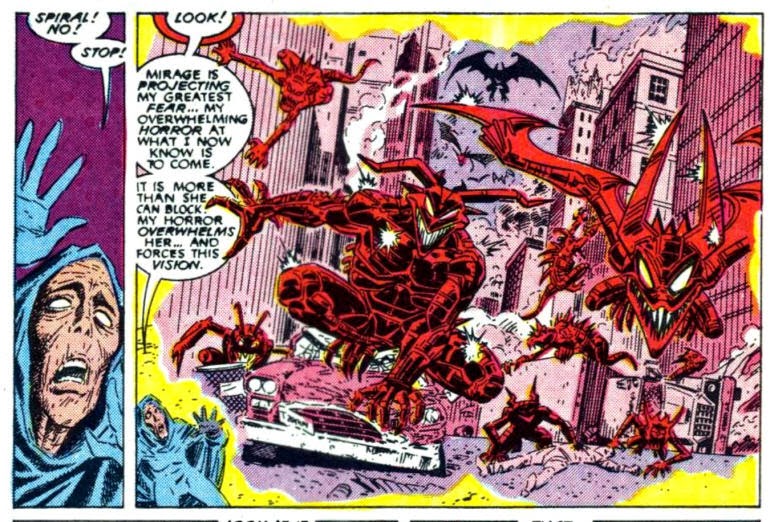 Destiny sees that Illyana will bring disaster to the world. 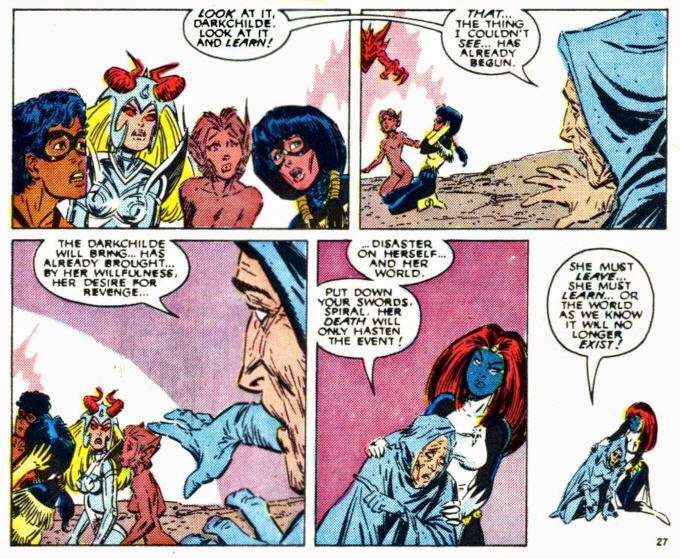 I Love the 80s
For whatever reason, Illyana is shown stripping down to her underwear to put on her costume, while everyone else gets into costume off panel. 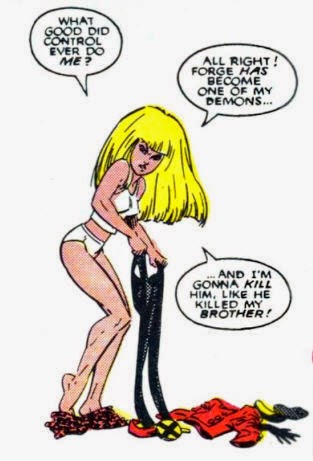 Artistic Achievements
I rather like the cover to this one (teal background aside), particularly the perspective of Stonewall. Everyone has something to do, stretched across multiple levels.

They're Students, Not Superheroes
Magneto reiterates once again the New Mutants are grounded and not allowed to use their powers without his permission, something they promptly ignore (because it worked out so well the last time). 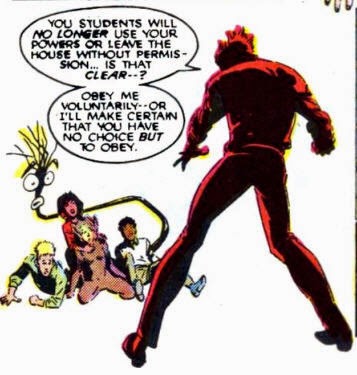 It's in the Mail
The letter column in this issue teases the sequel to Fallen Angels which never occurs, and also runs some letters urging the creators not to kill Doug.

Teebore's Take
Give Louise Simonson credit: she is not taking the events of "Fall of the Mutants" lightly, taking the time to deal with the ramifications of that storyline on a level that is nearly unprecedented in modern comics. After two issues (not counting the fill-ins) addressing the immediate aftermath of Doug's death, she now moves on to the deaths of the X-Men, as Illyana confronts Forge, determined to exact vengeance for his role in killing the X-Men. The end result is an issue that, in hindsight, almost reads like a pivot point for the series between "Fall of the Mutants" and "Inferno", as Simonson uses the fallout of the former to setup the latter (helped along by the presence of Destiny, always good for a foreboding prophecy or two).

In the meantime, we have a New Mutants/Freedom Force fight, and while Bret Blevins' strengths remain body language and facial expressions, his action choreography is a bit dodgy (there's a panel featuring Dani attacking Crimson Commando and I don't even know what she's supposed to be doing - jump kicking, I think?). Nevertheless, there's enough charm in the first meeting between these two teams to carry the day, and combined with its position between two big X-events, it makes for a surprisingly significant issue.