Game of Thrones 4x02: The Lion and the Rose 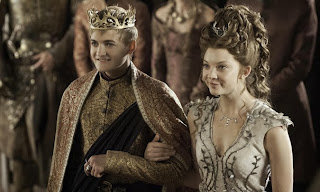 Dreadfort
Before we get to the fun part we’ll start at Dreadfort. Roose Bolton’s bastard son Ramsay Snow is playing his version the most dangerous game. Theon, er, Reek is now free but completely brainwashed to serve Ramsay. I was thankful for the lack of torture but seeing a presumably innocent young girl get hunted and killed wasn't much better.

I don't really remember the girl who was with Ramsay. Her name is apparently Myranda and she wants to be the fairest one of all. That’s bad news for any girls better looking than her but is presumably good news for the woman who is just slightly less attractive than Myranda. I imagine being the second best looking woman in town can have its advantages.

Anyway, Roose Bolton shows up and he apparently hasn't spent much time with Ramsay because he’s surprised at and none too pleased about what Ramsay did to Theon. Theon had trade value to Balon Greyjoy but Reek does not. Roose’s mood improves when Reek has information regarding the lives of Bran and Rickon Stark and where they’re most likely headed. So Ramsay is off to the Wall. Let’s hope Jon Snow is wearing a codpiece...or is willing to commit more fully to the oath of the Night's Watch.


Northish of The Wall
Bran is wargging his dire wolf, Summer. He seems to be getting addicted to it due to the fact that Summer can walk and he can’t. So being in Summer’s mind is more fun than his own. Jojen and Meera are concerned Bran will lose himself in the animal’s mind. Hodor gave a concerned “Hodor” too.

Bran then talks with a tree. The tree tells him to search beneath another tree farther north. The tree also shows Bran multiple times a vision of when he was pushed out of the castle tower. So, you know, dick move by the tree.

Dragonstone
Last season Stannis Baratheon made himself one of my favorites simply by seeing the note about the white walkers and actually deciding to do something about it. But now he’s pissing me off by burning alive seemingly innocent people in the name of the Lord of Light. He’s also mean to his wife. Then again, she hates her own daughter. So I have no idea how to gauge that situation.

Anyway, Melisandre seems to like Stannis' daughter alright. She’s teaching Shireen about the Lord of Light. I don’t know what religion is the true one in Westeros but I do know that those who worship the Lord of Light birth smoke monsters and come back to life Wolverine style. That’d be enough to get my vote.

King's Landing
Jaime wants to learn to swordfight left handed. Tyrion sends Bronn to spar with him. To keep people from finding out how defenseless Jaime currently is Bronn picks a spot he knows is safe because when he bangs broads there their screaming doesn't garner attention.

Cersei knows about Shae and is going to tell Tywin. Once that happens that will be the end of Shae. So Tyrion is mean to Shae to make her leave King’s Landing. I’m hopeful she’s gone for good because, honestly, I couldn't have cared less about the Tyrion/Shae storyline.

At the wedding breakfast gifts are given to Joffrey. Tyrion gives him a book. This goes over as well as you'd expect. Joffrey feigns appreciation but that goes out the window when Tywin gives Joffrey the second valyrian steel sword and Joffrey quickly tests the blade out on said book. He then chooses to name the sword Widow’s Wail which, incidentally, was the lamest of the suggested names shouted out by the crowd.

The wedding ceremony of Joffrey and Margaery goes surprisingly without a hitch. The same can’t be said about the wedding reception, however.

Loras is first threatened by Jaime who says if Loras marries Cersei she’ll kill him. I’m not sure if Jaime is saying this out of jealousy or just because it’s the truth. But then Jaime says that Loras need not fear because the marriage will never happen. I’m unsure why Jaime believes that.

There are some veiled to not-so-veiled insults hurled between Tywin and Lady Olenna as well as (later) between Cersei and Oberyn. Margaery announces that the ceremony's leftovers will go to the poor. Cersei makes sure this won't happen. I don’t know if this is a power play by Cersei to discredit Margaery or if Cersei is just deathly allergic to any good deed; no matter how tangentially she's related to it.

But the real news is that Joffrey is still an ass. He does his best to humiliate Tyrion by making him his cup bearer. He also gets people to throw stuff at his “fool” Dantos. He also stages a comedic take on the War of the Five kings using little people. Considering that most the people at the head table (as well as at other tables) have had people close to them die because of that war this comedy show doesn't go over very well.

Despite Margaery’s attempts to diffuse the situation Joffrey continues to be an ass. She tried distracting him with pie but Joffrey still demanded that Tyrion serve him wine. Joffrey drinks said wine and begins to cough and choke. Dantos tries (and I believe succeeds) in getting Sansa to come with him to safety as the poisoned Joffrey collapses to the floor and dies.

Cersei predictably points to the wine bearing Tyrion as the culprit. Tyrion predictably gives a "Who me?" look. All Game of Thrones fans predictably cheer the death of Joffrey. Seriously, I think even Jack Gleeson wanted Joffrey to die.

Other Thoughts
The title of the episode is “The Lion and the Rose.” This is likely a reference to Joffrey and Margaery. Although the Lannister’s symbol is the Lion and Joffrey is a Baratheon so he should be known as a Stag.

Then again, I don’t even think anyone in Westeros can call Joffrey a Baratheon without snickering.

The DirecTV description for this episode is “Tyrion helps Jaime; Joffrey and Margaery host a breakfast; Stannis loses patience with Davos; Ramsey finds a purpose for his pet.” That makes Game of Thrones sound like a Saturday morning kids show.

So I believe the girl we saw hunted in the beginning is someone we haven’t seen before.

I’m no expert in sword training but I’d think Jaime would want to practice solo with his left hand before sparring with a partner. Then again, maybe he already has?

I understand that brainwashing Theon did net some information but Theon's value to Balon was solely in Theon's ability to produce an heir. So, frankly, Roose Bolton could have had his cake and eat it too if Ramsay just held off on the castration. Or was Theon's penis so powerful that brainwashing was impossible while it was still attached?

I think wedding breakfasts should be a real thing.

When Tyrion insulted Shae to get her to leave it reminded me of that Saved by the Bell episode where everyone is mean to Slater in order to get him to go to Hawaii.

I wonder how Shireen feels about her face being used as a visual aid.

I’m very curious about this Iron Bank they speak of. Who’s in charge of it? Are they under the rule of the King of Westeros? Do they have reasonable interest rates? Are they FDIC insured?

Jaime's awfully confident confronting Loras considering Loras was a better swordsman than Jaime even before Jaime lost his hand.

I think Tywin is happiest when arguing with people in a seemingly polite tone.

I think it says something about Joffrey’s character that when he told everyone there had been too much amusement at his reception I initially took it at face value.

I'm not saying I'm disappointed it didn't happen but I was a little intrigued exactly how well the bedding ceremony would have gone over.

I suppose it's a bit apropos that Joffrey died at a wedding.

So, we've got ourselves a bit of a whodunit. Cersei thinks it's Tyrion but that's dumb. First of all, if Tyrion wanted Joffrey dead there are plenty of ways he could have made it happen in a much sneakier of fashion. You could argue that the humiliation he endured at the reception was the straw that broke the camel's back but that would suggest Tyrion carries around poison on him at all times on the off chance someone upsets him so much he wants them dead and they're drinking from a cup at the time. Even if Tyrion wanted to kill Joffrey at the wedding reception did he actually foresee that Joffrey would make him the cup bearer? I’m sure he expected some form of humiliation but that could have come in one of many of forms.

I don't think any of the Tyrells did it. I'm certainly not putting Margaery above murdering Joffrey, I just assume she would've liked to have birthed a male child first.

Oberyn isn't above suspicion considering the contentious conversations he has had with multiple Lannisters and there's well know bad blood between the Martells and the Lannisters.

Varys always claims that he serves "the realm." Hey, there's no greater service to the realm than killing Joffrey.

There's a dark horse in this conversation. I mean, can we ever completely rule out someone whose nickname is "The King Slayer?"

The leader in the clubhouse is Dantos since he had motive (well, who doesn't?), opportunity and was on the ball in getting Sansa the hell out of there as soon as Joffrey started choking. In fact, it seems so obvious it was him he either didn't do it or they'll probably just confirm it was him in the next episode.

So Tommen Baratheon is now the king? I don’t know much about him but I assume he'll make a better king than Joffrey because, well, how couldn't you?

I'm not sure what I think about Joffrey dying. He was a heck of a villain. (Let this be a lesson to all you aspiring writers. If you want to make a villain that's truly hated then make them evil, sniveling and weak but dangerous due to the unearned position of authority they have found themselves in.) So Joffrey was certainly fun to root against but his continued survival was getting unrealistic for me. He was antagonizing so many people in so many different ways that I felt like someone would eventually have killed him in a blind rage without any thought of the consequences.

It should be noted that we got no nudity this episode. Also, I've decided to add a new count of how many times Hodor says Hodor. Or do we think I should go with any time anyone says Hodor?

Jaime: Bold warrior you are attacking a man when his guard's down.
Bronn: Best time to attack a man!

Sansa: We have a new queen.
Tyrion: Better her than you.