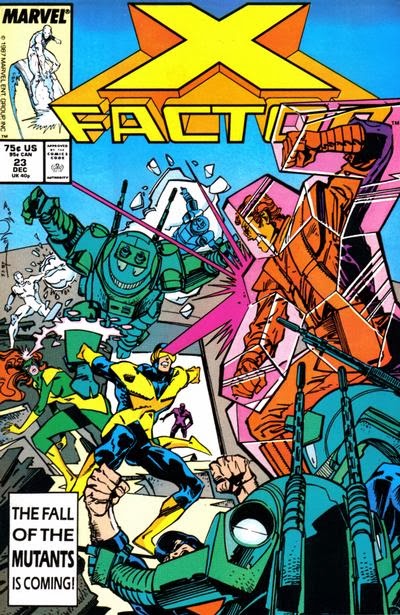 "You Say You Want Some Evolution?"
December 1987

In a Nutshell
X-Factor battles the Right

Plot
Having tracked their wards to the Right's secret base beneath the science museum in Arlington, X-Factor infiltrates the complex. However, Beast's brash actions quickly alert the Right to their presence. As they penetrate deeper into the complex, they get trapped in a room lined with ruby quartz, and seemingly knocked out by gas. However, Marvel Girl shielded her teammates from the effects of the gas, and when the Right try to collect them, they are able to escape, triggering a blackout in the process. Meanwhile, Apocalypse watches their battle from his ship as he pits his Horsemen against Death, who easily defeats his teammates, prompting Apocalypse to declare him their leader. Back in Arlington, the kids are freed when the power goes out, and they manage to overpower a guard and escape their cell. 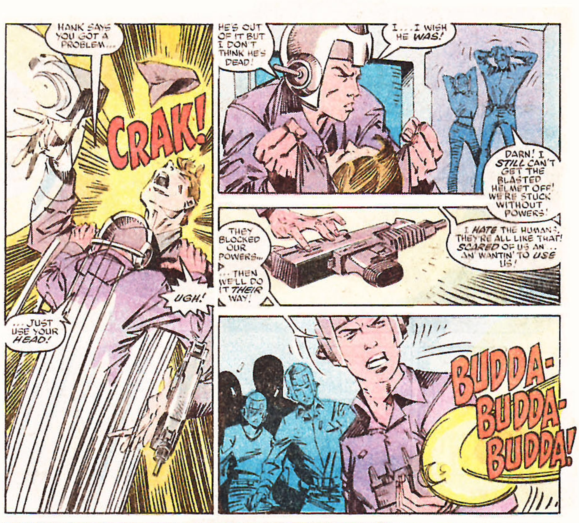 They come across a pitched battle between X-Factor and the Right's armored Smile Face troops. Hodge joins the fray, wearing armor made of ruby quartz, but Iceman's increased power enables him to crack Hodge's armor, allowing Cyclops to blast it apart, seemingly killing him. Yet when he approaches the body, it turns out to be a robot duplicat who taunts X-Factor before exploding. Marvel Girl gathers X-Factor and the kids, flying them out of the building just as it too explodes. As they land safely outside, however, Apocalypse suddenly teleports X-Factor to his ship, declaring it is time for their true test against his Horsemen.

Firsts and Other Notables
Death makes his first full appearance this issue (though this is generally considered a "cameo" appearance, with next issue his first full appearance, for whatever reason), wearing the blue-and-red costume that will remain with the character well into the 90s. He defeats the other Horseman to become their leader, and we see that his metal wings are capable of launching sharpened metallic "feathers" at his opponents. 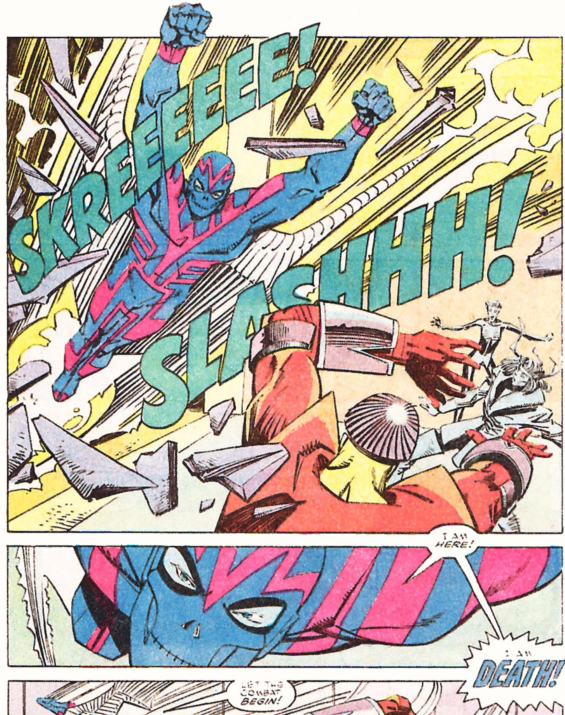 It's confirmed this issue that as a result of Pestilence's touch in issue #19, the more Beast uses his strength, the dumber he gets (even as he gets physically stronger), something which has been hinted at the last few issues. This ongoing "dumbening" will continue for awhile and eventually lead to the return of blue hairy Beast. 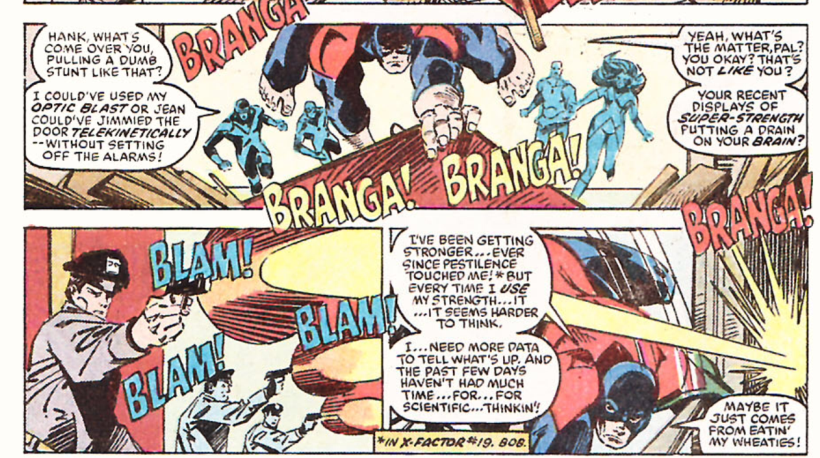 During the battle with the Right, Iceman receives a belt intended to inhibit his power. However, as it was designed based on his previous power levels, in his amped-up condition he merely regains some measure of control over his power via the belt, rather than it eliminating his power entirely. He'll continue to wear the inhibitor belt through "X-Tinction Agenda"; it disappears after that when he begins wearing the new While Portacio-designed X-Factor uniform. 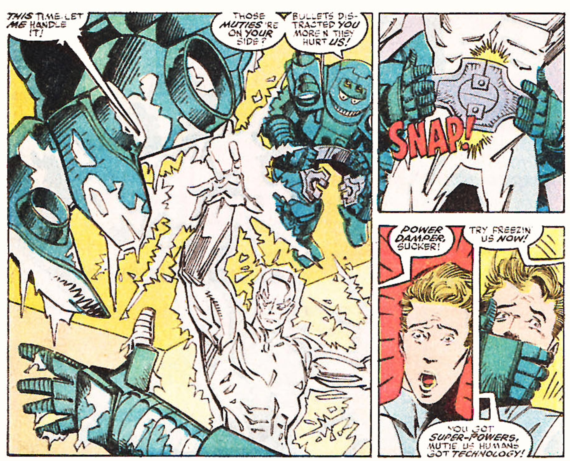 For what it's worth, Hodge formally fires the title characters from X-Factor in this issue. He also appears to die, only to reveal he faked his death and is actually alive and well, which becomes something of a trope for the character. 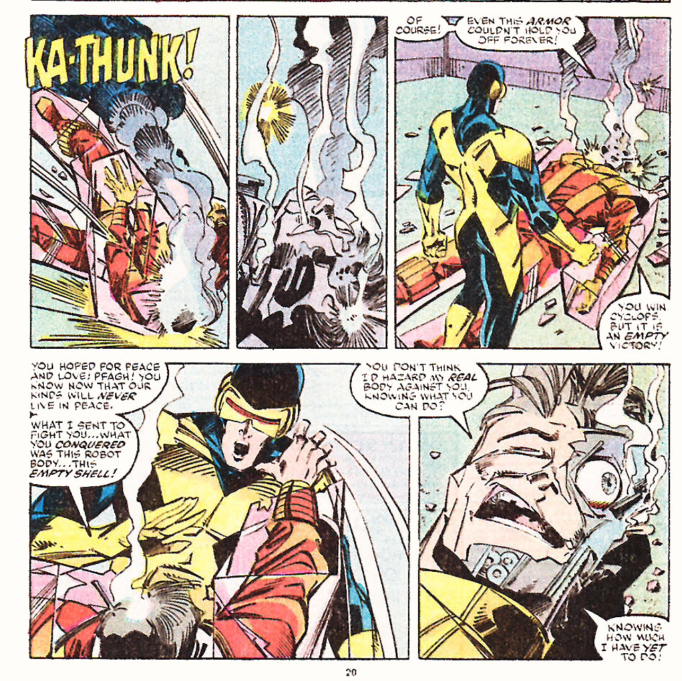 A Work in Progress
When Beast tries to question a guard, he seemingly kills himself, though Cyclops suspect he was implanted with a device that killed him in order to protect Right secrets. 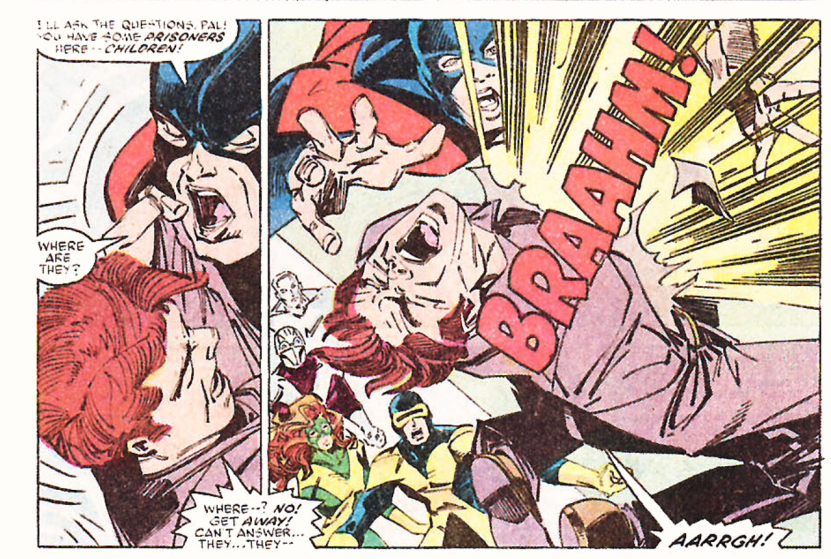 Rictor uses a gun with ease in this issue, saying he learned how from living in Central America. 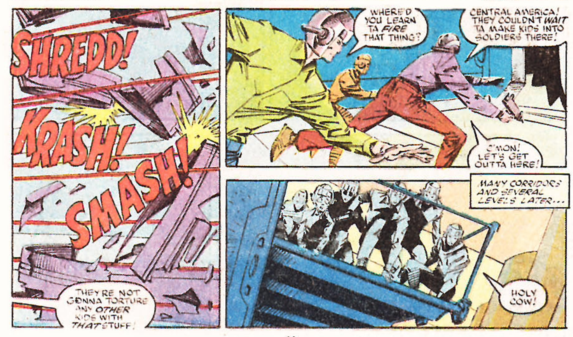 Hodge rants again about how mutants usurped his position of privilege earned by being born wealthy. 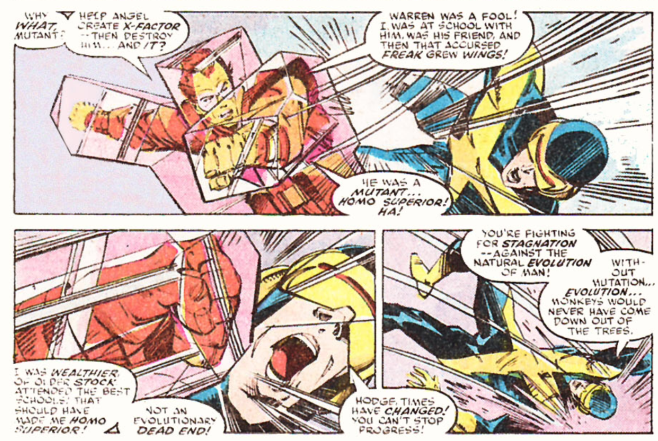 Artistic Achievements
If you look closely, you can see the point at which the HodgeBot (wearing the ruby quartz armor) enters the battle, after which the real Hodge leaves the scene (Hodge is on the floor, while the HodgeBot comes in behind the kids on the catwalk above Hodge and X-Factor). 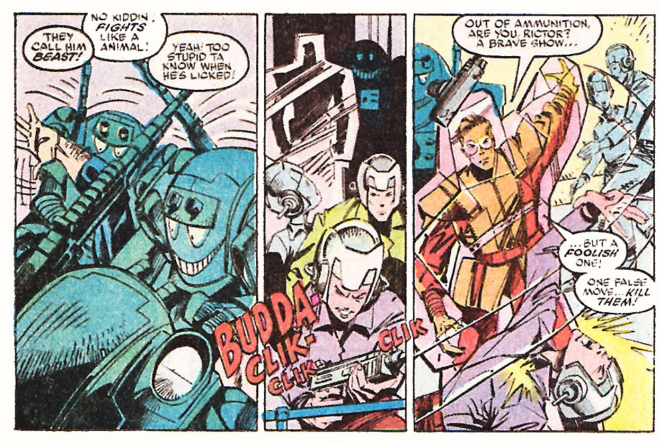 Mutants. Deeds. Know Them.
Infiltrating the Right's complex, Beast echoes Iceman's phrase, saying that humans should be judged by their deeds as well, and that the Right is evil. 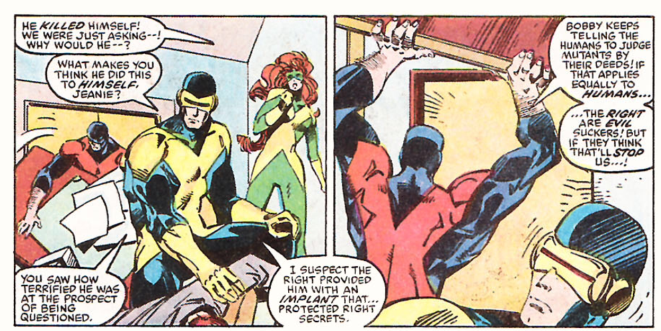 Teebore's Take
This issue serves to finish the first phase of the conflict between X-Factor and the Right while segueing directly into X-Factor's portion of "Fall of the Mutants". Not only does the end of the issue, which finds Apocalypse nabbing X-Factor to face off against his now-completed team of Horsemen make for an effective "out of the frying pan" cliffhanger, it also wisely keeps up the breakneck plotting of the series begun in issue #21 - Simonson, after all, is at her best when the plot clips along at a brisk pace.

The actual fight in this issue is also well handled: it manages to strike the right balance between ending the immediate conflict with enough gravitas while also not being so epic that it overshadows the looming crossover confrontation with Apocalypse. Having an increasingly-dumb Beast mucking up X-Factor's usually smooth teamwork adds a fun wrinkle and keeps the two sides evenly balanced (and Simonson does a nice job with Beast's dialogue here: it's dumbed down from his usual eloquence, but not as simplistic as it will become), and there's something about the HodgeBot's retro chic ruby quartz armor that I love; it's goofy but in a fun "only in comics" kind of way and is a striking image without being overly complex. Hodge and the Right will be back, but for now they've served their purpose: severing the main characters from the mutant hunter premise with as much of their dignity intact as possible, setting the stage for the next step in the evolution of the title.

Next Issue
"Fall of the Mutants" begins! Uncanny X-Men #225 pits the X-Men against Freedom Force, New Mutants #59 pits the New Mutants against the Ani-Mater, and X-Factor #24 pits X-Factor against Death and the Horsemen of Apocalypse.
Newer Post Older Post Home
Posted by Austin Gorton at 12:00 PM