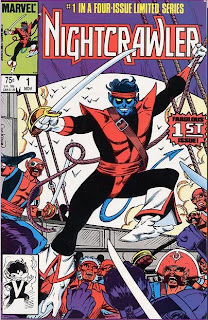 In a Nutshell
Nightcrawler goes on a cross-dimensional swashbuckling adventure

Plot
Issue #1: Nightcrawler tells Kitty of a past adventure in which he journeyed to another dimension, meeting Sevh the Oracle and encountering the Well at the Center of Time. Intrigued, Kitty attempts to recreate the well in the Danger Room, but somehow manages to create the real thing. She's horrified when Nightcrawler and Lockheed are dragged into the well. They find themselves transported to a strange world, and are made members of a pirate crew. Minutes pass as Kitty and Illyana scramble to find Nightcrawler, but weeks pass for him. However, he refuses to participate in the pirates' attack on another ship, instead disabling their ship and leaving with their target. Taken to the nearest port, Nightcrawler attempts to help a young women in trouble, but it knocked unconscious by one of the pirates. Awakening back aboard their ship, he discovers he's been sold to the sorcerer Shagreen.

Issue #2: Shagreen takes Nightcrawler and Lockheed to his fortress, where he intends to study Nightcrawler to learn the secret of his teleportation abilities. Escaping, Nightcrawler rescues a princess Shagreen means to sacrifice, dueling the sorcerer aboard his skyship. After Shagreen falls to his apparent death, Nightcrawler is taken aboard the royal ship and knighted for his actions. Just as Nightcrawler is getting to know the princess, however, Kitty tries again to bring him home, but instead he lands in another world, face-to-face with a childlike-version of himself. 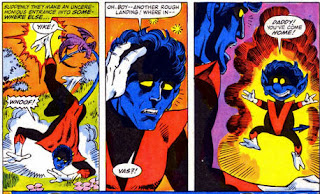 Issue #3: Nightcrawler is taken to Bamf City, where he finds himself surrounded by thousands of Bamfs, the small creatures that resemble him. Suddenly, Shagreen appears, capturing all the Bamfs and issuing a challenge to Nightcrawler to meet him at the Fangs of Doom. The remaining Bamf takes Nightcrawler to find transportation, and in the process, Nightcrawler meets all the characters from the story Kitty once told Illyana, and he realizes he's landed in a world that resembles that story. As Kitty and Illyana continue to try and retrieve Nightcrawler, he and his new allies invade Shagreen's castle, but all are captured and prepared to be sacrificed.

Issue #4: The one remaining free Bamf rescues Lockheed, and together, they free all the female Bamfs. This massive group attacks Shagreen and frees Nightcrawler and his companions. Suddenly, Windrider, this world's version of Storm, blasts into the castle and battles Shagreen. During the fight, Nightcrawler manages to get a hold of the sorcerer's staff and breaks it, rendering him powerless. With the Bamfs and his new friends freed, Nightcrawler is once more yanked away by Kitty and Illyana, traveling across several more worlds before meeting Sevh the Oracle, who tells him he must will himself home. Finally, Nightcrawler arrives back at the mansion, much to the delight of Kitty and Illyana.

Firsts and Other Notables
This series marks Dave Cockrums return to the X-Men universe and one of the X-Men he co-created. He writes, pencils and inks all four issues of the series, with his wife Paty doing the coloring.

It's established in issue #3 that the characters Kitty created for her fairy tale in X-Men #153 all reside within an alternate reality that bears a strong resemblance to the one crafted by Kitty (later designated Earth-5311. 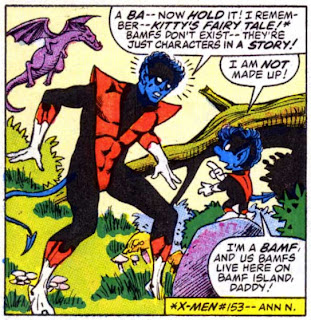 In issue #1, Nightcrawler references a past adventure in which he and the Vanisher were sent to an alternate reality (a reality he returns to in issue #4), all of which is a reference to Nightcrawler's portion of Bizarre Adventures #27. 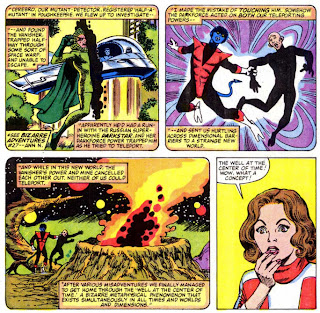 Lockheed is referred to as a "furmious bandersnitch" by the denizens of the first world in which he and Nightcrawler arrive, a reference to Lewis Carroll's poem "Jabberwocky".

A Work in Progress
In issue #1, Nightcrawler rattles off a list of his various skills. 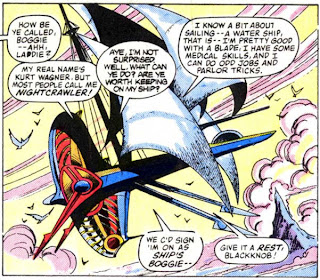 When the captain of the ship Nightcrawler saved offers him a reward, Nightcrawler angrily rejects it, saying his loyalties can't be bought. 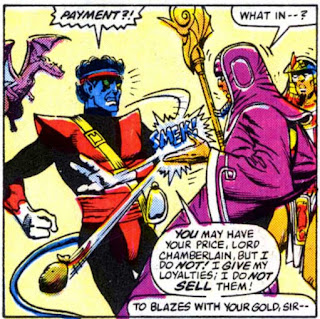 At one point, Nightcrawler duels with three swords, using his tail to wield the third, the first time, I believe, we've seen him do so.

During one of her attempts to bring Nightcrawler home, Kitty instead gets a hold of just his costume, which is drawn in a way that suggests its all one piece. 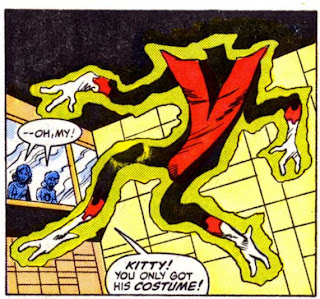 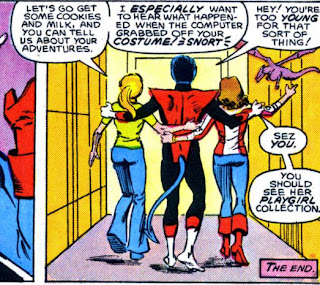 I Love the 80s
The cover to issue #2 is an homage to Jaws, appropriately enough given that Shagreen looks like a shark. 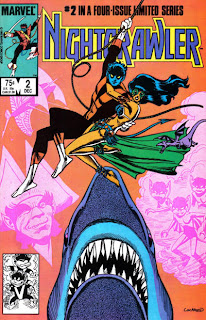 One of the Bamfs makes a delightful pun involving Bob Hope.

Nighcrawler's brief sojourn through the world of Cretaceous Sam is easily the highlight of the series. 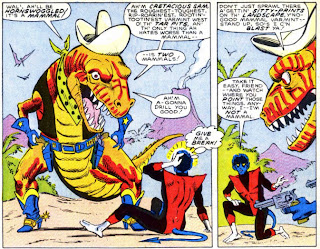 At one point, Nightcrawler tries to get home by saying backwards the name of Mr. Mxyzptlk, the fiendish imp from the 5th Dimensions who beguiles Superman (and who is forced to return to his home dimension when he says his name backwards), then tries saying his own name backwards.

Young Love
The Bamfs are all "enthusiastic" lovers. 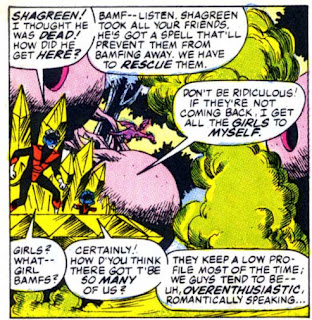 Dave Cockrum on Nightcrawler
"I was a big Errol Flynn fan. I just wanted to have some fun with Nightcrawler. It was an opportunity to just let go with my imagination, and I love those swashbuckler movies. Pirate ships and princesses in distress - it had a little bit of everything! Shooter kept trying to monkey with the coloring, which my wife Paty was doing. She finally wound up turning it in so late that he wouldn't have a chance to change it."

Teebore's Take
Like other limited series of this vintage (such as Iceman and Beauty and the Beast and the Random Son of Dr. Doom), this is one I hadn't read before. Unlike those series, this one at least has a vision of what it wants to be, with a level of craft in terms of both story and art that rises above the workmanlike (at best) material in those other series. This is clearly a personal project for Dave Cockrum and one he's having a blast doing. The story is fun, whimsical, (intentionally) silly and full of energy (it's so energetic it's almost exhausting to read at times). How much one enjoys it, of course, comes down to personal taste. The work itself is at a high enough level that the success of the series largely depends on how you feel about a story designed to be as lighthearted and filled with whimsy as possible (certainly, nothing here is anywhere close to essential reading in terms of the ongoing X-Men narrative).

It's been previously established that my tastes don't allow for a whole lot of whimsy in my stories, so not surprisingly I wasn't terribly excited by a lot of this (I enjoyed the first two issues, in which Nightcrawler is forced to reconcile his personal ethics with the conventions of the swashbuckling pirate tales he loves so much far more than the last two issues, in which he interacts with the characters from "Kitty's Fairy Tale"). When it comes to this sort of thing, a little goes a long way for me. But there's definitely a difference between a poorly done series and one which simply doesn't appeal to my tastes, and there's no denying this is a series that completely succeeds at telling the kind of story it's designed to tell. That such a story does little for me personally is by no means an indictment of the work itself.

Next Issue
Tomorrow, we look at Power Pack #12 and Secret Wars II #1, then return to Uncanny X-Men for issue #195 next week.
Newer Post Older Post Home
Posted by Austin Gorton at 12:00 PM