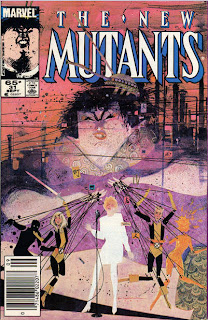 In a Nutshell
The New Mutants shut down the Gladiators and reunite with an old friend.

Plot
In the arena, Roberto and Amara face off against a gigantic robot containing Kitty Pryde, much to the delight of the Gladiator's mysterious telepathic leader. As a possessed Dazzler uses her power to amp up the crowd, Kitty manages to free herself of her possession, and phases out of the robot. Dazzler is then forced to fight Roberto, Amara and Kitty. Just then, Sam, Illyana and Rachel arrive and join the fight. Illyana teleports Dazzler into Limbo, which frees her of her possession, but leaves the rest of the Gladiators believing Illyana killed their friend. They rush into the arena and attack the New Mutants. Illyana recalls Dazzler from Limbo and when the police arrive, Dazzler urges her friends to break up the Gladiators once and for all.

Examining the box seats of the Gladiators' leader, the New Mutants discover an escape tunnel. Following it, they're suddenly telepathically attacked once more and turned against one another. Kitty has Dazzler fill the tunnel with light, illuminating their foe for Sam. He blasts into their opponent, but is shocked to learn she is their former teammate Karma, horribly changed, who they had believed was dead. Using her slaves as hostages, Karma escapes. Just then, Rachel is able to telepathically reach the X-Men, who are on their way to pick everyone up. However, the New Mutants, confused and angry about Karma's survival and transformation, declare that it's up to them to either help their friend or bring her to justice.

Firsts and Other Notables
This is Bill Sienkiewicz's final issue as regular series penciler. After a fill-in turn by Steve Leialoha for the next three isssue, he will return to ink over Mary Wilshire's pencils for a few issues, but his run is considered to end as of this issue.

The true master behind this latest incarnation of the Gladiators is revealed to be Karma, who has been missing and presumed dead since issue #7, following an encounter with a mysterious and powerful evil presence and an explosion in issue #6, though Xavier suspected at the time that she had survived. She is now morbidly-obese and clearly evil; the cause of those changes will be explored in the next story. 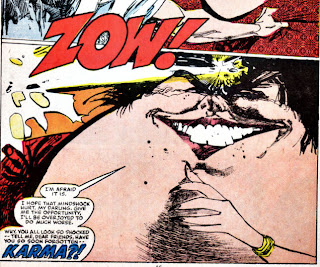 The previous appearances of the Gladiators' former leader, Alexander Flynn, are revealed to be a projection created by Karma. The Gladiators themselves effectively disband after this issue, with the local authorities made aware of the operation. Thankfully, we won't see them again for quite some time, until Claremont's return to the X-Men universe in the 00s.

The issue ends with a one-page "Xavier Files" pin-up on Empath and a "Headmistress' Evaluation" on Empath's fellow Hellion Catseye, from the White Queen, both drawn by Sienkiewicz. Xavier notes that Empath may be the best representation he's ever known of pure evil, while it's established that Catseye lived most of her as a cat before learning she could transform into a human, and that she may be smarter than Kitty. 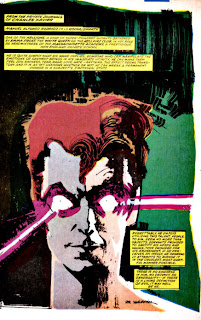 The Chronology Corner
This issue takes place prior to Uncanny X-Men #196, with Kitty and Rachel next appearing in that issue following this one.

A Work in Progress
At one point, there's a closeup of Illyana during the fight in the arena, and she's oddly back in her disguise from issue #29, even though she's clearly not wearing it in the wider shots. 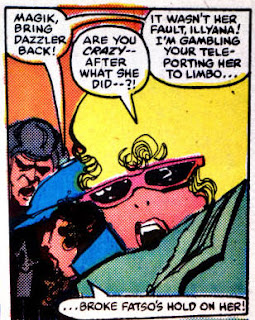 Kitty offers the help of the X-Men to track down Karma and learn what's happened to her, but Sam declines, saying the New Mutants, like the X-Men look after their own, and that Professor X isn't well and Sam doesn't quite trust Magneto yet.

Claremontisms
Sunspot: strong, but not invulnerable. Got it.

Artistic Achievements
Sienkiewicz ends his run on a strong note, cover-wise. The final page of the issue also features a group shot of the team, with the characters missing from this story appearing behind the others, and was clearly meant as a farewell image for a team Sienkiewicz never really had the opportunity to draw in its entirety too often. 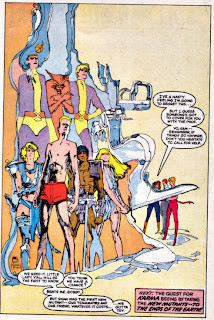 "Professor Xavier is a Jerk!"
Upon learning that Karma is alive, Roberto is outraged, believing Xavier lied to them about her death, refusing to believe he could have been wrong. 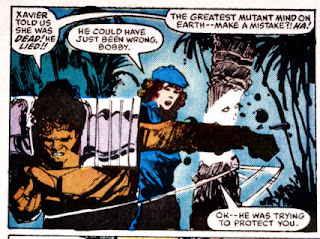 Teebore's Take
And with that, Bill Sienkiewicz's seminal and groundbreaking run comes to a close, neither with a bang nor a whimper. As I've said before, this story neither reaches the highs of his run ("The Demon Bear Saga", "Legion") nor the lows (the dull and drawn out Cloak and Dagger story). It is mostly notable for reintroducing Karma, one of the original members of the cast, to the series, and even that isn't revealed until nearly the very end. Nothing else if not consistent, this issue ends the story as it began: genre-standard material with some editorially mandated crossover material thrown in. And though there are plenty of good issues and stories yet to come for New Mutants, there's no denying that with Bill Sienkiewicz's departure the book's artistic peak has ended. Other pencilers will come and go, some with as unique a style and strong a vision, for good and bad, as Sienkiewicz, but never again will the series feature artwork as energetic and innovative as was in the previous fourteen issues.

Next Issue
Next week, Kitty and Colossus take center stage in Uncanny X-Men #197, while the hunt for Karma begins in New Mutants #32.
Newer Post Older Post Home
Posted by Austin Gorton at 10:00 AM