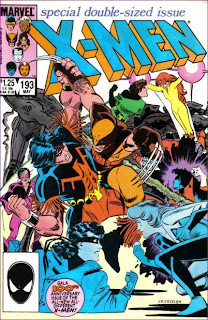 In a Nutshell
Thunderbird kidnaps Banshee to avenge his brother's death.

Plot
On Muir Island, Banshee is attacked and captured by John Proudstar's brother, James, who has taken up his brother's mantle as Thunderbird. Meanwhile, Professor X awakens in the Morlock tunnels, taken there by a Morlock who found him after he was left for dead by the group of students who attacked him. His life saved by the Healer, Callisto warns him he must allow his body time to heal, then takes him back to the mansion. In the Rocky Mountains, Thunderbird visits the site of his brother's death, declaring his intent to extract revenge on Xavier. Despite having stated his desire to carry out this attack alone, he's joined by three of his Hellion teammates: Empath, Roulette and an enthralled Firestar, who merely want to cause trouble. Meanwhile, Storm's ship nears Africa. In New York, the X-Men are contacted by Thunderbird, who tells them he's taken Banshee to the NORAD facility within Cheyenne Mountain, and will kill him in 24 hours unless the X-Men intervene. Though doing so will invariably brand them as outlaws in the eye of the government, they agree they cannot abandon Banshee. 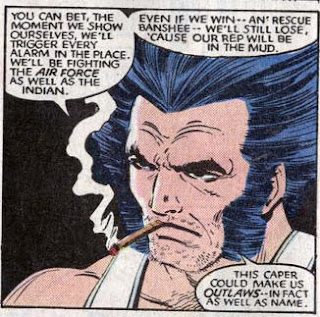 The X-Men sneak into the military base, leaving Xavier in the hidden Blackbird as backup. However, Empath and Roulette attack him, and in his weakened state, he is overwhelmed. As Wolverine and Kitty track down Banshee, Empath and Roulette proceed to use their powers to alert the military to the presence of the X-Men and ratchet up their panic. Wolverine and Kitty find Banshee and a waiting Thunderbird. He and Wolverine fight as Kitty gets Banshee to safety, but Thunderbird releases a gas which knocks out both X-Men. However, Thunderbird finds himself unable to leave them to die, and drags them to safety. The X-Men eventually overcome and capture the Hellions, but Thunderbird slips away and confronts Xavier. Xavier is able to talk Thunderbird down, convincing him that his brother made his own choices. Back at the mansion, the X-Men listen to a news report branding them outlaws. They offer Firestar and Thunderbird a place at the school, but they decline, even though it means continued association with their more nefarious fellow students. Meanwhile, a disguised Nimrod acclimates himself to the present day, ultimate deciding he needs more information to determine if his primary program of "defend humanity" still means the extermination of mutants. However, overhearing reports of a Juggernaut sighting in the city, he decides that he will hunt down and terminate outlaws such as the Juggernaut and the X-Men.

Firsts and Other Notables
This is a double-sized issue celebrating one hundred issues of the "All New, All Different" X-Men appearing in X-Men (since issue #94). As such, it returns to the setting of the story kicked off in that issue, as John Proudstar's brother, James (previously introduced in New Mutants as one of the Hellions) tries to extract vengeance on the X-Men for the death of his brother. As such, he appears in the Thunderbird costume for the first time, a look he will return to when he eventually joins the New Mutants shortly before their transition into X-Force. 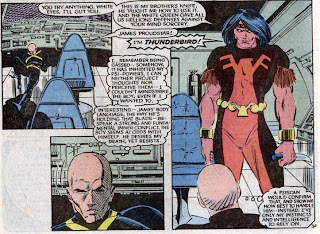 After first debuting on TV as one of Spider-Man's titular friends on Spider-Man and his Amazing Friends, Firestar makes her first appearance in regular Marvel continuity this issue (she made a previous comic book appearance in a one-shot issue based on the cartoon). She is a student of the White Queen and a Hellion, and is shown to be under the emotional thrall of Empath. She will eventually star in a limited series which fleshes out her background and the events which led her to be a student at the Massachusetts Academy. 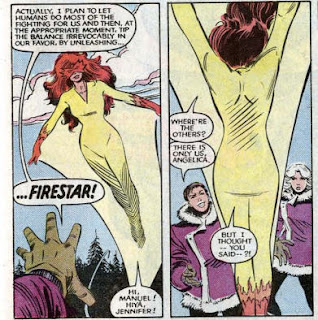 After being attacked at the end of last issue, Xavier, who was near death, is brought back by the Morlock Healer, though Callisto warns him he needs to give his body time to heal and take it easy, physically and psychically. This marks Claremont's roughly fourth attempt to depower or sideline Xavier to keep him from solving all the X-Men's powers telepathically. The debilitating effect of his injuries is immediately made apparent in this issue, and will remain an ongoing source of frustration for the character, ultimately leading to his departure and most prolonged absence from the team. 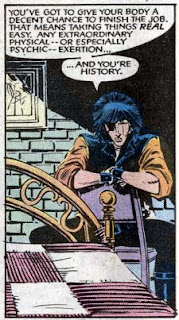 Kitty debuts a new costume in this issue. She's got the name now, but it's not quite her classic Shadowcat look, though we're getting closer. 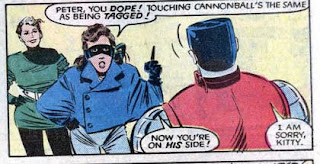 Rachel is considered to have officially joined the team as of this issue, though as of yet she has not been given a codename (or much of a costume).

It's revealed that the children of one of the Morlocks, Annalee, have been killed. Their deaths will form the foundation of the plot of a future issue, and their killer eventually revealed to be a Marauder, making this issue the first hint towards the upcoming "Mutant Massacre" storyline, roughly a year-and-half away (Callisto offhandedly mentions the Healer has been busy of late, another hint at the upcoming massacre). 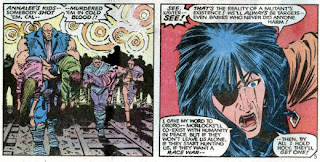 The issue ends with a thank you to Len Wein and Dave Cockrum, who "had the dream", as well as Tom Orzechowski and Glynis Wein, who have "been with us from the beginning".

The Chronology Corner
This issue picks up shortly after the closing pages of the previous issue, following the attack on Professor X. Banshee returns to Muir Island, accompanied by, amongst others, Xavier, Doug and Dani (seen in this issue), in New Mutants #26.

A Work in Progress
Callisto reiterates that Storm leads the Morlocks, and will do so until she regains her powers, gains new ones, or dies. 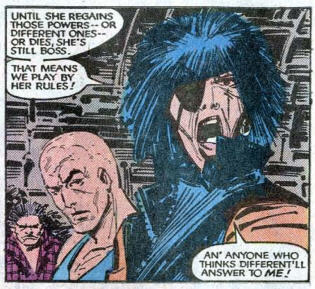 Professor X meets Callisto and sees the Alley for the first time. It's also established that the Morlock tunnels branch out from Manhattan, and reach as far as Westchester.

Callisto says she received some of her scars when she attempted to return to the surface. 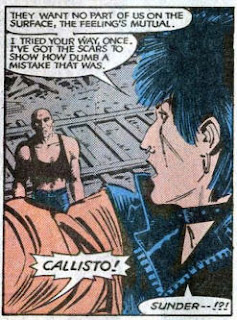 Storm appears briefly, aboard the ship nearing Africa, and has a vision of her mother. 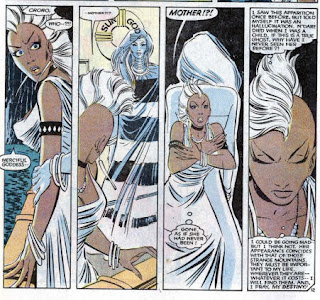 Once the mission goes south, Nightcrawler beats himself up, twice comparing himself to Cyclops and Storm and saying things would have gone better if they were in charge. 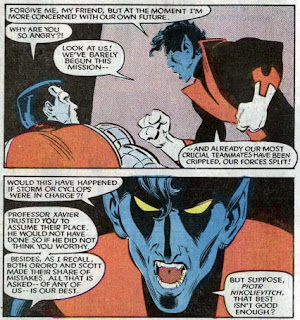 Colossus gets to the be the "ball" in a fastball special.

Officially branded as outlaws by the government, the X-Men deal with the Hellions themselves, showing mercy and declaring themselves more concerned with justice than law. 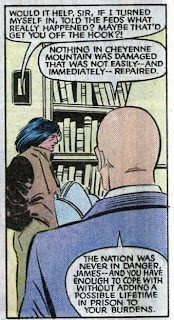 Nimrod reveals he was already traveling through time when he encountered a strange force that brought him to this timeline, establishing that Dr. Strange's spell in issue #191 didn't pull Nimrod into the past but merely redirected him to this particular past. 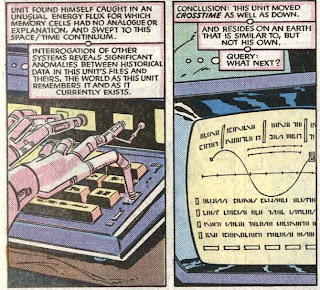 I Love the 80s
Rachel joins the team in this issue, but her costume consists of some combination of overalls and exercise pants. 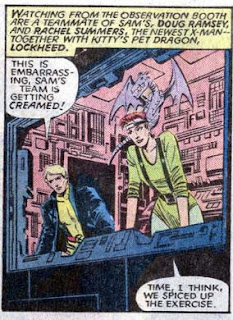 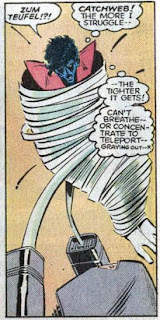 Despite his recent injuries, Professor is shown smoking a pipe when the X-Men return to the mansion. 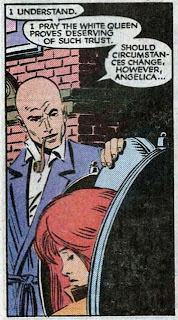 Nimrod contents on the primitive nature of the Rodriquez's computer. 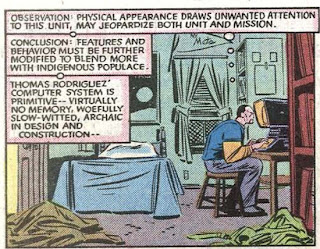 "Professor Xavier is a JerkPunk!"
Xavier awakens in the Morlock Tunnels dressed in a leather/punk look, and when he returns to the mansion, gets hassled about by the X-Men, with Sam repeating Xavier's words to him when he was admonished for wearing a tattered Lila Cheney t-shirt in New Mutants #24. 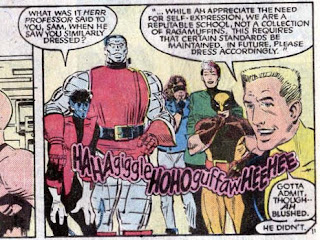 Young Love
Firestar spends most of the issue in the thrall of Empath, believing she loves him thanks to his power.

Rachel Summers, Crybaby
When asked to use her power to locate Banshee inside NORAD, Rachel promptly freaks out, and pretty much spends the rest of the issue crying so hard she's completely useless to the team. 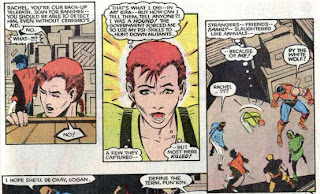 Rogue, at least, has noted that Rachel's default state seems to be "crying". 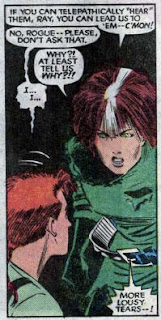 Human/Mutant Relations
In the wake of their "attack" on NORAD, the X-Men are branded outlaws by the government, and become the subjects of a nation-wide manhunt. 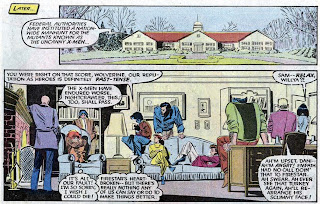 Teebore's Take
To celebrate one hundred issues featuring the "All New, All Different" X-Men which debuted in 1975, Claremont pushes the X-Men across a significant threshold: in the wake of their well-intentioned attack on NORAD, the X-Men have now been officially branded outlaws in the eyes of the law. This, coupled with the rising tide of anti-mutant sentiment Claremont has been slowly building for dozens of issues across multiple titles, puts the X-Men in a unique position. Never celebrated within the context of the Marvel Universe on the same level of the Avengers or the Fantastic Four, the X-Men nevertheless always fought in support of the law of the land.

Now, as Professor Xavier's discussion with Thunderbird at the end of this issue suggests, the X-Men have found themselves in a position where they must dole out justice to fellow mutants themselves, on their own terms. This issue, then, marks a turning point in Claremont's re-contextualization of the X-Men as superheroes, the beginning of a phase that will find them increasingly forced to ally with some of their once greatest foes in the face of ever-more dangerous threats, threats from both mutants and, increasingly, the very government they once fought to protect (we see it already in this issue: the Hellions, having caused no real damage to anything beyond the X-Men's reputation, are allowed to return to their headmistress, the White Queen, and forge their own path, because allowing them to return to the fold of one of the X-Men's previously-greatest enemies isn't as bad as handing them over for traditional justice at the hands of a human government).

But Claremont and Romita Jr. wisely couch all this heady stuff in a ridiculously fun issue that pays homage to the book's more traditional superhero roots even while it's upending them. Returning to the setting of the new X-Men's first, and most Silver Age-y, story, the creators turn in a double-sized issue that celebrates everything that's great about the X-Men, packing it full with clever action, strong characterization, and multifaceted villains. In that the immediate conflict of this story is raised, addressed and resolved within the confines of the issue's pages, it is arguably the most traditionally "done-in-one" issue of the Claremont/Romita Jr. run (even while it is building on previous events and will go on to inform later events, continuing their run's "narrative chapter" aesthetic), making the issue both a celebration and repudiation of the book's more traditional superhero past.