Game of Thrones 3x06: The Climb 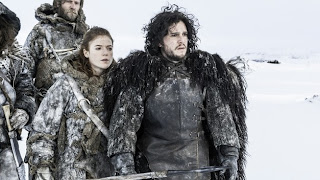 The Fiery Batcave
I'm a little bit ashamed that when Melisandre left Stannis two episode ago, saying she was off to find more royal blood, I didn't immediately suspect that she was going after Gendry, one of the last of Robert Baratheon's copious amount of bastards (instead I was thinking, "wait, does Stannis have another brother out there?).

Nevertheless, here she is, buying Gendry from the Brotherhood, affirming for Arya that they're not as good a group of guys as they like to pretend. The most interesting thing here (aside from Melisandre's predictions concerning Arya; lots of eyes?) was the theological discussion between Melisandre and Thoros, as they compared notes about the Lord of Light. Apparently, this is a religion in its relative infancy, as much of it hasn't been codified or even shared with all parties (Melisandre, for all her cryptic knowledge, seemed genuinely surprised to learn the extent and frequency to which Beric has been resurrected).

While Gendry certainly has a right to feel betrayed, at least he's (presumably) in for a better fate than the last time he was taken somewhere against his will. I mean, I have to think sex with Melisandre is better than that rat torturer guy at Harrenhal.

Harrenhal
A brief check in here, as Jamie (hilariously) struggles to cut his meat and discovers his host may not be as kind as he first appeared. We're obviously heading towards a place where Jamie is forced to sacrifice himself in some capacity for Brienne, but it should still be fun to watch that unfold.

Riverrun
All things considered, the price of betrayal turned out to be pretty reasonable for Robb. He gets to keep his wife, give up a castle he doesn't want anyway, and get back at his uncle for his uncle's screw-up. Frankly, it's kinda win-win, and I'm a little surprised Edmure didn't object more, simply on the grounds of this being Robb's mess but someone else being forced to clean it up. Nevertheless, hopefully this means the path is cleared for Robb to get back to kicking butt and taking names.

Winterfell (Except that guy was lying.)(Or was he?)
It's made clear both that the impish guy who faked freeing Theon is actually the one calling the shots and that, with the survival of Bran and Rickon now known, he's just torturing Theon for the fun of it.

We still don't know too much about this guy and why he's torturing Theon for kicks, but there was a visual clue in the episode: the banner of Roose Bolton, the guy at Harrenhal who has Jamie, features an image of a man suspended from an X in a manner similar to Theon's current placement. Add that to the mention last season of Roose Bolton sending his bastard to check on Winterfell for Robb (when word reached them that Theon had taken the city), and, presumably, that's who the guy torturing Theon is. Though where all this is heading remains as unclear as ever.

On the Road
Mainly a water-treading installment, the big revelation being that Jojen's visions are/can be accompanied by seizures, something that is likely to serve as a dark suggestion of things to come for Bran. Otherwise, it was just some (admittedly funny) sniping between Osha and Meera over who is better at caring for their respective visionary.

I'm hoping that by the end of the season we get a better sense of Jojen as a character and where all this stuff with Bran is heading, but giving Jojen a vision of Jon was an effective way to connect those two stories, however tentatively, and makes this storyline the first one to connect back up with Jon's in any significant way.

North of the Wall/The Wall
A quick check in with Sam and Gilly aside (good to know they've escaped the remnants of the Night's Watch for now), these sequences were all about the climb (the most literal of few titular climbs in this episode), as Jon and the detachment of Wildlings scale the Wall. It's a marvelous, tense sequence that really makes it clear just how effective a barrier the Wall is (could you imagine trying to bring an army over it?).

Jon and Ygritte also talked about their relationship in light of their sexy cave time last episode, and it's to Ygritte's credit that she admits to knowing Jon isn't quite the turncoat he's pretending to be, promising to stay true to him while still proving she's not an idiot.

That final sequence, as Ygritte reaches the top of the wall and finally looks out over the world, one half cold and frozen, the other warm and sunny, was absolutely gorgeous. It wasn't quite as intense or jaw-dropping as a hoard of White Walkers or Dany's slave army being turned loose on their masters, but it was awe-inspiring in its own way nonetheless.

King's Landing
The highlight of the episode (at least, the non climbing highlight) was easily the conversation between Lady Olenna and Tywin, as each makes clear their respective impatience for bullshit. Though Tywin ultimately emerged the victor (Sansa is not marrying Loras), Olenna made it clear that when it comes to potential scandal and wanting family secrets kept, Tywin can't exactly throw stones (particularly since the secrets of his family could cost them the throne).

The scene between Tyrion and Cersei was also strong (as their scenes usually are), as it was nice to see the pair commiserating on equal ground for a change. It was also confirmed that Joffrey ordered the hit on Tyrion, not Cersei, which is an interesting, if not exactly shocking, revelation.

Poor Sansa. Not only for the heartbreak she suffered after Tyrion broke the news to her and she was forced to watch Littlefinger sail away without her (though she definitely dodged a different bullet there), but for the complete delusion she showed during her conversation with Loras earlier in the episode.

The conversation between Varys and Littlefinger, which eventually segued into a Littlefinger voiceover, was loaded with thematic significance, but the thing it left me thinking was, once again, "holy crap, this guy is creepy".

Poor Roz. Now we'll no longer be able to tell which scenes are a pure fabrication of the show simply by your presence. Rest in peace.

Other Thoughts
No Dany and company this week, nor Maergary.

This was another episode with a loose thematic connection between the various story bits. This time, it was all about the lies told by the powerful to placate the weak.
Newer Post Older Post Home
Posted by Austin Gorton at 10:00 AM