X-amining Beauty and the Beast #1-4 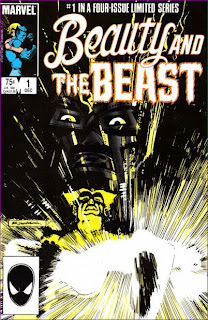 In a Nutshell
Beast and Dazzler fall in love and get caught up in an underground mutant fighting ring.

Plot
Issue #1: In Latveria, Dr. Doom receives word that a boy claiming Doom is his father has reached adulthood and is living in Californa. Doom decides to keep an eye on him. At that moment, Beast arrives in Hollywood, on vacation, while Dazzler mourns the loss of her singing career following her outing as a mutant. She is approached by Alexander Flynn, who wants her to perform in an experimental underground theater for his boss, Hugo Longride. Eager to be back in the spotlight, she agrees. Beast runs into her at a party, and is turned off by the new company she's keeping. However, when her power suddenly goes out of control and she runs off, Beast tracks her down to the Heartbreak Hotel and promises to take care of her. Issue #2: As Beast tends to Dazzler, the pair grow closer and fall in love amongst the other mutants living at Heartbreak Hotel. Flynn finds Dazzler and offers to help her get her power under control if she honors her contract and performs in his theater. She agrees, over Beast's objections. He nevertheless attends her first performance, but is horrified to discover the theater is actually an arena in which mutants fight one another for sport. Flynn claims the whole thing is staged, despite the death of a mutant in the arena, but Beast doesn't buy it, and urges Dazzler to leave. But feeling a kinship with the other misfit mutant performers, she decides to stay. 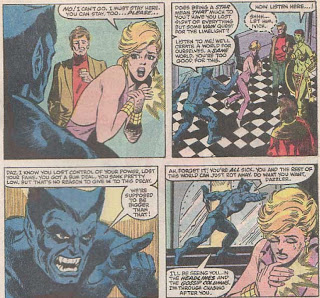 Issue #3: Beast and Dazzler continue their romance, despite Beast's objections to her continued involvement in the gladiatorial matches. During one of her fights, Beast explores the arena and discovers that Flynn has been causing Dazzler's powers to go out of control via a drug he's been secretly giving her. However, before he can tell Dazzler about it, he's captured and injected with the drug himself. Placed in the arena, Dazzler is forced to fight a now-feral Beast, but he snaps out of it before Dazzler is forced to kill him. The crowd still wants blood, however, so Flynn provides it, killing Hugo Longride and taking over the arena for himself. Issue #4: Dr. Doom arrives at the arena, his visit triggered by the death of Longride, who was a robot sent to spy on Flynn. Claiming to be Doom's son. Flynn tells his mutant gladiators that he intends to lead them in an overthrow of Doom's country of Latveria. Recognizing this as a suicide mission, one of the gladiators frees the captive Beast and Dazzler, who help the gladiators overthrow Flynn. Doom warns him to cease claiming kinship with Doom, while the remaining mutants decide to run the arena themselves, and turn it into something productive for their own benefit. Dazzler and Beast then break off their relationship and go their separate ways.

Firsts and Other Notables
I have no idea what the genesis of this series was, though I'm not convinced it wasn't just an attempt to use Beast in a series with the title "Beauty and the Beast" (in execution, any allusions to the familiar story by that name are nonexistent, except in the literal sense that Beast is Beast and Dazzler is attractive). We're not too far removed from the launch of X-Factor at this point, which was originally intended to reunite the surviving original X-Men, with Dazzler taking the spot of the deceased Jean Grey. If that plan was already in motion at this point (which, granted, is doubtful), it's possible this was intended to create some backstory between two of that future book's characters. Otherwise, I dunno. Maybe fans in the mid 80s were just clamoring for more Dazzler?

The concept of a group of mutants fighting in underground gladiatorial matches (long a staple of genre fiction), as well as most of the gladiator characters featured in this story, appear here for the first time, and will be picked up by Claremont and used in a story which begins in New Mutants #29 (and then again, decades later, for an X-Treme X-Men story following his return to the X-universe). 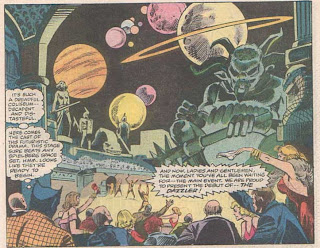 The main villain of the story is Alexander Flynn, appearing here for the first time and only time (he'll pop up in the forthcoming New Mutants story, but will ultimately be revealed there as an illusion created by the true villain behind that story). Flynn claims to be the son of Dr. Doom via an unknown gypsy woman, and possesses a low level telepathic power that enables him to subtly hypnotize people. Doom appears in this series more or less to tell Flynn he's wrong, and I don't believe any mention of Flynn was made by Doom via any of the regular Fantastic Four writers through the years (whereas various other children of Doom, real or otherwise, have occasionally been featured in stories through the years).

Poltergeist, a young mutant with telekinetic abilities tied to his emotional states, who is one of the residents of Heartbreak Hotel, first appeared in Spider-Woman #49 (writen by Ann Nocenti). In this story, he believes Spider-Woman to be dead as a results of the events of the final issue of her regular series, even though it's already been established elsewhere that she's alive (which is acknowledged in this series via footnotes).

This series is written by X-Men and New Mutants editor Ann Nocenti, and is drawn by Don Perlin, a Bronze Age Marvel veteran best known for a lengthy run on The Defenders. Covers for each issue are from Bill Sienkiewicz.

The Chronology Corner
According to the Marvel Chronology Project, Beast appears in this series between issues #133 and #134 of New Defenders, while Dazzler appears following Marvel Graphic Novel #12 (the events of which occurred following issue #34 of her series) and next appears in Dazzler #35.

A Work in Progress
As the first issue opens, Beast is in Hollywood visiting Wonder Man (not Wonderman), on vacation from the New Defenders. The pair became friends during their time on the Avengers together, and at this point in time Wonder Man is a member of the West Coast Avengers working on his acting career. 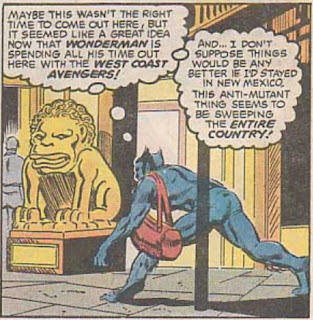 Issue #2 features a number of mutants living at the Heartbreak Hotel, one of whom claims to have flunked out of that school in Westchester, though this is her first and only appearance.

Noting the relatively mundane powers possessed by most of those mutants, Beast thinks it makes sense there would also be a number of mutants with innocuous powers out there. 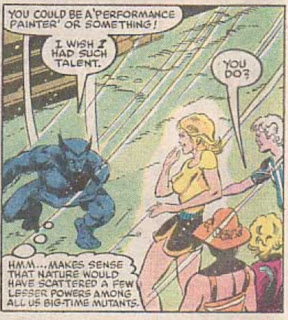 Somewhat annoyingly, Beast refers to Dazzler through most of the series as "Daz", despite the pair professing to being in love, at which point some variation on her real name, Alison, would seem far more realistic.

I Love the 80s
In issue #1, Beast wanders past wax figures of Marilyn Monroe, Indiana Jones, and Vincent Price. The name "Indiana Jones" appears on the marquee above Mann's Chinese Theater; given the publication date of this issue, that is likely a reference to Indiana Jones and the Temple of Doom. 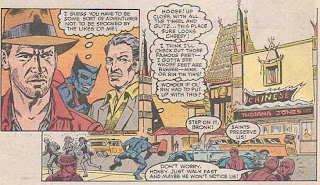 One of the mutant gladiators says that the best thing for his hangover is to look at his sculpture collections, which...okay, sure. Whatever. 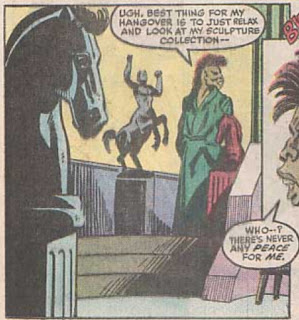 That's some outfit Dazzler is wearing in issue #3, as she prepares to fight in the arena. 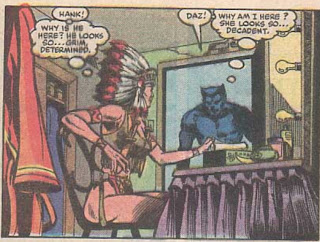 Human/Mutant Relations
Anti-mutant sentiment is running high throughout the series, following as it does on the heels of "Dazzler: The Movie". In issue #1, Dazzler comments that at least there aren't separate drinking fountains for mutants yet. 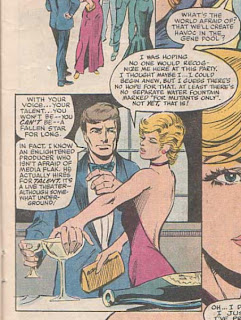 In issue #3, a crowd freaks out at the sight of Dazzler and Beast spending time together on the beach. 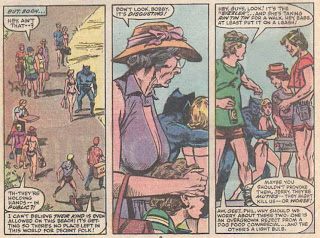 Teebore's Take
Like the Iceman limited series (which was on stands alongside this one), this is another bi-monthly limited series starring (well, co-starring) a former member of the X-Men and a current New Defender that I'd never read before. And like the Iceman limited series, it leaves you wondering who Marvel was expecting to buy this, and is rather dreadful. I wanted to cover it in part because I'd never read it before, and also because all of the business with the underground mutant gladiators gets appropriated shortly by Claremont for a New Mutants story. But man, do I regret that decision.

To begin with, the romance between Beast and Dazzler, ostensibly the centerpiece of the series, is completely forced and tacked on, a perfect example of telling instead of showing. Their voices throughout are remarkably bland and generic, and really, Doom is the only characters in the entire series to ever speak with dialogue that sounds in any way unique (and it isn't like Beast isn't a character with a pretty well established voice at this point). There's the kernel of an interesting idea buried in all the dross about the fickle nature of fame and the price some people are willing to pay to achieve it, but little time is spent developing it. The artwork reaches the baseline quality for art from this era, competent and clear in its depiction of the action, but entirely unexciting. In fact, it's representative of the entire series, which ultimately commits the cardinal sin of superhero comics: it's boring (even the Sienkiewicz covers are boring by his standards). It's neither good enough nor bad enough to be entertaining. It just...is. I've always considered this series to be an unexplored little corner of the X-Men universe; it probably would have been better left as such.

Next Issue
Next week, we look at Alpha Flight #17 and Dazzler #38, followed by the X-Men and Alpha Flight #1-2.
Newer Post Older Post Home
Posted by Austin Gorton at 10:00 AM