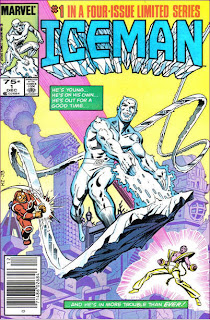 In a Nutshell
Iceman visits his parents and confronts the physical manifestation of oblivion.

Plot
Issue #1: In a far off land, a hidden being dispatches two servants, White Light and Idiot, to retrieve someone for him. On Earth, Iceman returns to his hometown of on Long Island for his dad's retirement party. Along the way, he becomes smitten by a young woman named Marge. That night, fed up with being harrassed by his family and upset by the constant needling from his parents about being a superhero, Iceman storms out of the party and bumps into Marge. They grow closer as they discuss their families, but then White Light and Idiot attack. Iceman holds them off as Marge and her family mysteriously vanish, but Marge's home is destroyed in the process, and Iceman's parents are furious that he exposed his mutant powers to the his whole family.

Issue #2: White Light and Idiot are destroyed by their master, who then dispatches a woman named Kali to find what he seeks. In New York, Iceman discovers a strange device in the wreckage of Marge's house. He accidentally activates it and disappears. Meanwhile, in 1892 England, Marge and her family watch as Bobby is sent through time. Marge's family insists that she should help him, but she refuses. Bobby ends up in 1942 New York, and is shot in the arm escaping a suspicious cop. He passes out and awakens in the apartment of his younger parents. Kali and her minions attack, drawn to the strange device that sent Iceman through time. Marge finally intervenes, appearing before Kali and telling her she's in the wrong time, then opening a portal that will bring Kali to Marge. However, Iceman's father was injured in the fight with Kali, and dies. A horrified Iceman realizes that with his father dead in 1942, he'll never be born. 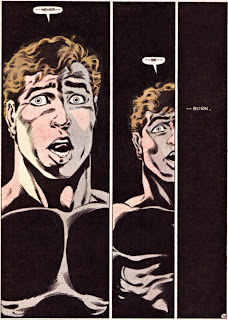 Issue #3: As a result of the death of his father before he was born, Iceman finds himself in the realm of Oblivion, the embodiment of non-existence and the being who has been seeking Marge. She has defeated Kali, and Oblivion tells Iceman that Marge is his daughter Mirage. He's reconstituted Iceman so that he can bring her to Oblivion in exchange for his continued existence. Iceman is transported to an idyllic small town and finds Marge. He tries to reason with her to return to Oblivion, but she refuses. A fight breaks out between them, which ends when Marge knocks out Iceman. Suddenly horrified by what she's done, she vows its time to face her father, and takes Iceman with her into Oblivion's realm.

Issue #4: Marge confronts Oblivion, and Iceman realizes he's treating her the same way his parents have been treating him. Fed up, he attacks Oblivion, and manages to overpower him. But Marge, realizing she can't exist without her father, intervenes and restores Oblivion. Defeated and exhausted, Iceman is consumed by Oblivion, but Iceman refuses to give up. Motivated by his love for his parents, he bursts forth, ready to fight once more. However, Oblivion stays his hand, humbled and intrigued by the power of love he felt while Iceman was inside him, a power greater even than Oblivion. He turns back time and restores Iceman's father, then sends him home. Iceman and his parents have a heart-to-heart, and they come to terms with his life as a mutant and role as superhero. He then leaves with his teammates, hoping to make his parents proud.

Firsts and Other Notables
Iceman appears here at a time when he was a member, alongside former X-Men Angel and Beast, of the New Defenders. Once a loose coalition of heroes centered around Dr. Strange, Namor the Sub Mariner, Silver Surfer and the Hulk, about two years prior to this series The Defenders was re-titled The New Defenders, and featured for the first time a consistent lineup, anchored by the three former X-Men, operating out of Angel's New Mexican home. This new team was featured in more traditional superhero adventures than the former, more oddball original Defenders - like the Avengers, they even received government clearances.

The climax in issue #4 features Iceman declaring he's done feeling self-conscious about himself, his powers and his role as a hero, and will move forward with a newfound confidence in himself. This becomes a recurring beat for his character in the years ahead, as various events at various times will cause him to once again swear off being a pushover and be confidant in himself once and for all. 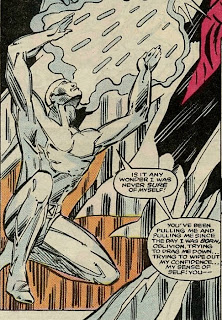 Iceman's parents appear and feature heavily in this series, as Bobby grapples with his somewhat strained relationship with them. Both have made previous appearances, notably in the Iceman's "Origins of the X-Men" backup story in the sixties, but their appearances have been rather inconsistent, both in terms of their physical appearance (both are noticeably older in this series than they appear later) and personality. His father particularly suffers from this. Having initially reacted poorly to the revelation that his son was a mutant before accepting it in the wake of the public attack on Bobby in his origin story, he's back to being uneasy with his son's mutant nature (and his role as a superhero) in the first issue of this series. By the end, he's once again come to terms with it, but by the early 90s he'll be back to being portrayed as something of bigot (both towards mutants and other minorities in general) for several years before ultimately accepting Bobby for who he is once again in the wake of the mid 90s crossover "Operation: Zero Tolerance".

I suppose this is technically the first appearance of Oblivion and his daughter Mirage/Marge, as well as some of Iceman's cousins and random family members, but as Oblivion only appears in a few issues of Quasar after this series and the rest have yet to appear again, this is definitely more of a "firsts" note than a "notable" one.

This series is written by J.M. DeMatteis, an established and well-respected industry veteran who had long run on both Captain American and The Defenders (including the initial New Defenders issues) prior to this. He will go on to write, amongst other things, the seminal "Kraven's Last Hunt" Spider-Man story before settling in for a lengthy run on Spectacular Spider-Man and other Spider-Man titles throughout the nineties (including Amazing Spider-Man #400, the issue which seemingly killed off Aunt May). However, he is arguably most well known and acclaimed for scripting, over Keith Giffen's plots, the "bwa-ha-ha" Justice League of the late 80s and early 90s at DC Comics.

Art comes from Alan Kuppenberg, also a long time, though less acclaimed, industry vet. Like DeMatteis, he previously worked with Iceman on issues of The New Defenders.

A Work in Progress
Iceman, last seen in X-Men studying to be an accountant, as since left school to devote himself full time to being a superhero as one of the New Defenders, much to the consternation of his parents.

I Love the 80s
One of Iceman's neighbors, spotting him changing in the yard, believes him to be both a godless Communist and a sexual deviant. 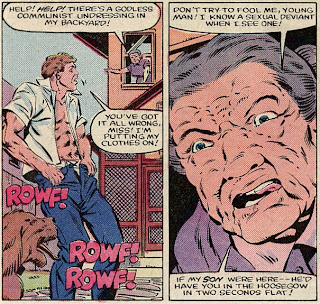 Marge's "father" references Mr. Roberts being on TV. The only show I could find by that name ran for a season in 1965, so I'm not sure if that's specifically a reference to that show or something else. 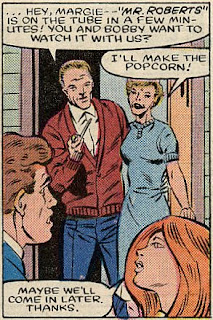 Iceman's parents getting married in 1944 and Iceman being born in 1959, as suggested by the second issue, no longer quite fit in Marvel's sliding timeline.

Young Love
Iceman spends most of this series mooning over Marge, more or less falling in love with her at first sight and planning their wedding minutes after meeting her, until he learns she's the daughter of Oblivion.

Human/Mutant Relations
In one of the series few references to events in the X-books, in issue #1 Bobby mentions the rising anti-mutant sentiment in the country following Dazzler outing herself as a mutant in Marvel Graphic Novel #12, despite the X-Men having exposed Reverend Stryker in "God Loves, Man Kills", an event Bobby had thought might have eased tensions. 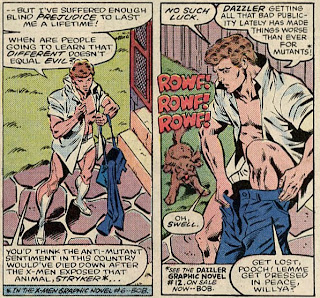 One of the local cops in Iceman's hometown specifically does not like mutants at all. 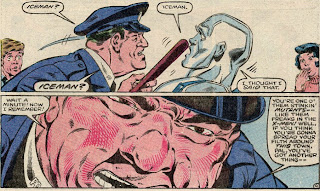 Teebore's Take
I'd never read this series before, and that combined with the fact that it wasn't handled by the X-office, such as it was at the time, and I've never heard terribly good things about it, led me to initially pass it over for consideration of coverage. Then I thought that all those same reasons might make it interesting to examine: to read something I hadn't read before, to see how one of the original X-Men was being handled outside the confines of X-Men, and, if nothing else, it might be something so bad it's fun to read. Well, I can say that I was right in that this certainly was interesting. By which I mean, it is pretty much a mess.

There is a legitimately interesting idea at the core of this series, and J.M. DeMatteis is by no means a bad writer. He is, in fact, both well-respected and well-accomplished in the industry, known for imbuing his stories with a fair amount of both humor and psychological insight. Unfortunately, he sets Iceman, a character better suited to the former, in a story that's more focused on the latter (I feel bad for any kids who, seeing these issues on the stands back in the day and recognizing one of Spider-Man's happy-go-lucky amazing friends from TV, decided to pick up the series, only to discover a story in which, amongst other things, Iceman nullifies his own existence by going back in time and unintentionally killing his father). The concept of a superhero coming to terms with his personal issues by fighting a personification of oblivion isn't an inherently bad one (heck, super hero comics thrive on that kind of stuff), it's just one that's hard to get too invested in when the superhero in question usually fights most of his foes by cracking jokes while throwing chunks of ice at them . To stick Iceman, a character at this time (and, arguably, still to this day) generally recognized as being relatively lighthearted and goofy in disposition into a story like this is certainly ambitious, but that ambition ultimately doesn't pay off.

Next Issue
Uncanny X-Men #189 has Amara and Rachel taking on the town, while New Mutants #24 deepens the Cloak and Dagger mystery.
Newer Post Older Post Home
Posted by Austin Gorton at 12:00 PM