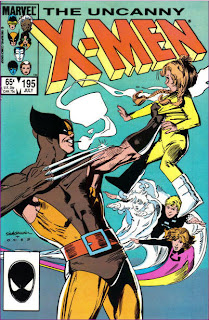 In a Nutshell
The X-Men rescue Power Pack from the Morlocks.

Plot
Awoken by a thunderstorm, the Power children realize their parents don't know who they are, and discover that all traces of their existence have been removed from their home. Remembering they recently met a Morlock who could alter peoples memories, they change into their costumes and head into the sewers. However, a group of Morlocks is waiting for them, and all but Katie are captured. However, Masque manages to disfigure her face before she gets away. Fleeing through the subways, Katie is found by a police officer and taken to the hospital. The next morning, Kitty overhears a news report about Katie, and recognizing Masque's work, realizes the Morlocks have broken their word not to attack surface dwellers. She brings Rogue, Rachel and Wolverine to the hospital where they rescue Katie and learn what happened to her siblings. 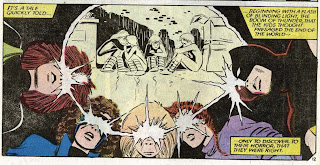 In the Morlock Tunnels, the X-Men and Katie discover a a bedroom that resembles Katie's, at which point Annalee enters, along with Katie's siblings, all of whom have been brainwashed to think they're Annalee's children. A fight breaks out between the X-Men, the Morlocks and the Power Pack kids, but when Callisto learns what happened, she orders her errant followers to return everything to normal. However, Katie, seeing how sad and lonely Annalee is, forgives her and declares that she can be Power Pack's special grandmother, and promises they can visit one another. Just then, Rachel receives a telepathic alert summoning the X-Men back to the mansion, sent not by Professor X, but by Magneto!

Firsts and Other Notables
This issue forms a loose crossover with Power Pack #12, which detailed the initial attempt of a specific group of Morlocks to replace Annalee's murdered children with Power Pack.

It ends with the X-Men being summoned home by Magneto; we see their return in Secret Wars II #1, but this marks the first time Xavier's request of Magneto to lead the X-Men in his stead is referenced in X-Men. 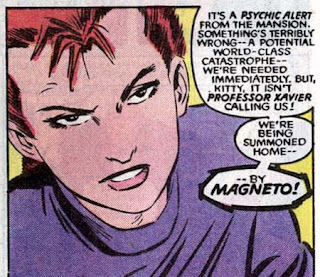 It's noted that Nightcrawler is not with the team because he is away on another mission, though it's not clear what that mission is. It's not a reference to his adventures in the Nightcrawler limited series, as that series also featured Kitty working feverishly throughout to bring him home. Colossus is also absent from this issue, though his lack of presence is not commented on.

Bill Sienkiewicz provides the cover to this issue.

The Chronology Corner
This issue occurs immediately after Power Pack #12, and before Secret Wars II #1.

A Work in Progress
In an effort to help connect the world of the X-Men to that of Power Pack, Claremont has Kitty reference a a paper she's working on for a class with Dr. Power, Power Pack's father. 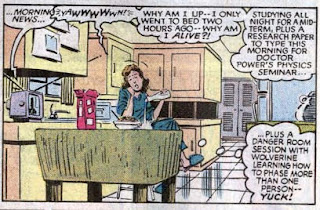 Kitty scoffs at the suggestion that Katie Power could be a mutant, saying she's not old enough, suggesting once again that mutant powers don't manifest until adolescence (though there are plenty of stories, prior to this one and following it, that contradict that notion).

Kitty's costume gets closer to her classic Shadowcat look. 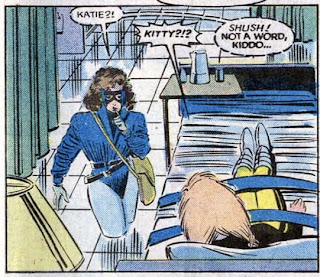 In Nightcrawler's absence, Kitty acts as team leader, a job for which Wolverine believes she is best suited. In a recurring bit, Kitty is equal parts embarassed and proud at Wolverine's continued references to her as "Boss".  We also learn that she's become capable of phasing multiple people along with her at once.

Kitty notes that the X-Men and Morlocks are friends at this point. 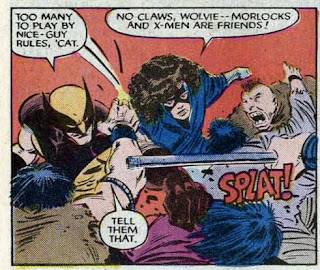 I Love the 80s
Katie professes to thinking that being a superhero would lead to fun adventures like Luke Skywalker had, though Wolverine, apparently a Star Wars fan, points out that his adventures weren't all that fun for him either.

For Sale
There are house ads for Secret Wars II and Dazzler #38.

Teebore's Take
Picking up where Power Pack #12 left off, this issue introduces the characters of Louise Simonson's Power Pack to the world of the X-Men. As much as I understand that series to work on its own merits, Power Pack has always seemed like an odd fit with the X-Men universe: At a time when Claremont is making his series increasingly more dark and complicated, with the escalation of anti-mutant sentiment and the government's efforts to target mutants, bringing his characters into contact with Simonson's pre-teen characters aimed at kids is a strange decision (I've never known for sure if this crossover was editorially-mandated, or if Claremont of his own accord threw a bone to his friend and former editor).

The discrepancy between the increasingly-edgy X-Men and the more family-friendly Power Pack isn't yet that apparent in this issue, however. Set in the dingy Morlock tunnels and featuring a pretty creepy setup (the Power children having been forgotten by their parents), this story doesn't feel entirely out of place amongst the more recent issues of X-Men. Romita Jr. and Green turn in some of the strongest art of their run, and the X-Men remain center stage throughout the story (it helps that it can be enjoyed entirely on its own, without reading the preceding Power Pack issue; I'd read this issue several times before ever reading its lead-in). Though it doesn't deal much with Claremont's recent efforts to heighten tensions between the X-Men and the government, this is nevertheless another enjoyable, if not entirely essential, chapter in the Claremont/Romita Jr. run.