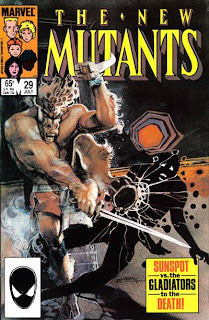 In a Nutshell
Roberto and Amara are kidnapped by the Gladiators.

Plot
Sam and Illyana race through the Westchester County airport after a kidnapped Roberto and Amara. They catch up to the van containing their friends on the tarmac, only to realize they've been placed on a departing plane. Sam attempts to catch up to the plane, but is unsuccessful. Illyana teleports Sam to Limbo, where they interrogate the driver of the van. They learn that their friends have been captured by a group known as the Gladiators, operating out of Los Angeles. Illyana teleports them to LA, but also accidentally shifts them in time, leading them to arrive a week after they left. They head for Lila Cheney's house, where Sam explains the situation and they learn that one of Lila's recently-hired sessions singers is Dazzler, who has a past history with the Gladiators. Elsewhere, a captive Roberto is taken before Alexander Flynn, the apparent leader of the Gladiators. He and Amara are told they will fight to the death for sport in the arena, or else a group of runaway children the Gladiators have captured will be killed.

They agree they must do what they can to protect the children. In the Bermuda Triangle, Lee and Magneto are discussing their relationship when an astral projection of Professor X interrupts them, warning Magneto of the arrival of the Beyonder and, in light of Xavier's weakened condition, asks Magneto to lead the X-Men in his place. In LA, Sam, Illyana, Lila and Dazzler attend the Gladiators latest show, much to the delight of the Gladiators' actual master. When one of Dazzler's friends from her time with the Gladiators is threatened in the arena, she intervenes, triggering a melee between the Gladiators and the New Mutants. The fight is interrupted by the arrival of Magneto, who declares he has been sent by Xavier to summon the New Mutants to the defense of their world. Roberto and Amara refuse to leave the Gladiators, but Sam, despite his better judgement, believes Magneto, and he and Illyana join him.

Firsts and Other Notables
Guido Carosella makes his first appearance in this issue Here, he is Lila's bodyguard (a position he'll maintain throughout Claremont's tenure), but he'll join X-Factor as Strong Guy during Peter David's run on that title, and remains a mainstay to this day. 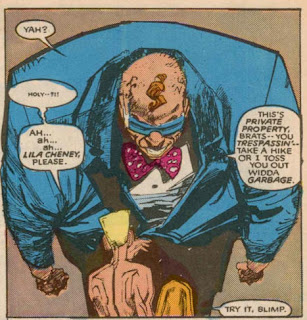 Professor X telepathically contacts Magneto, asking him to lead the X-Men in his place against the Beyonder, a setup for Secret Wars II #1 (which we'll look at next week), as well as the first overt occasion that Magneto has been asked to help the X-Men. 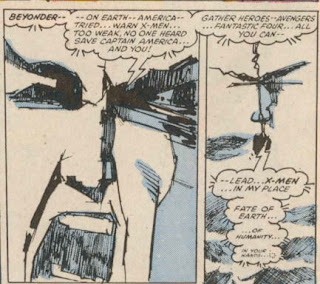 Later in the issue, Magneto debuts his new "M" costume.

Presumably as part of Marvel's late-inning push for the character, Dazzler guests star in this issue. Since Dazzler #38, she has surreptitiously joined Lila's band as a backup singer. 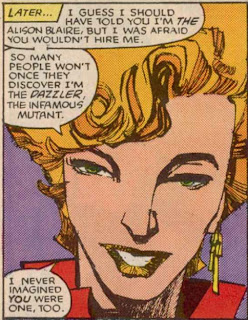 Mr. T stand-in Axe, last seen in issue #7, pops up as a member of the Gladiators.

Alexander Flynn, the alleged son of Dr. Doom who started the Gladiators in the Beauty and the Beast limited series appears as a hologram, presumably having resumed his previous position, though there are hints of someone else running the show, whose identity will remain a running mystery until this story ends.

A Work in Progress
Illyana spends roughly the first half of this issue in a bikini.

In chasing after the plane containing Bobby and Amara, Sam notes he's flying higher and faster than he ever has before.

Illyana says she's been practicing her teleporting ability, though she still lands her and Sam a week into the future when she attempts to send them to LA. 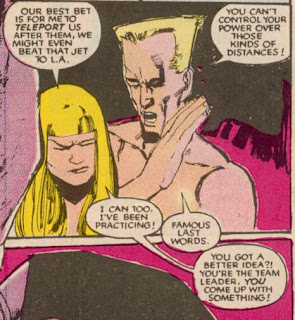 Despite vowing to run the Gladiators themselves, in a non-lethal way, at the end of Beauty and the Beast, the combatants are back to killing one another for sport, even going so far as to kidnap runaway kids.

Bobby and Amara both received the same drug that was given to Dazzler, to make their powers unstable. 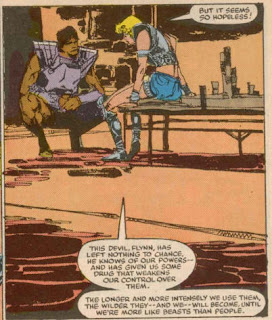 I Love the 80s
Lila references the band Nazgul (the name of which is a Lord of the Rings reference) and it's lead singer, both of whom are a reference to a George R. R. Martin novel, The Armageddon Rag. Nazgul was also mentioned in Uncanny X-Men #194 as the band Rogue was listening to on the radio in the shower.

Sam declares he's making up a plan as he goes along, like Indiana Jones. 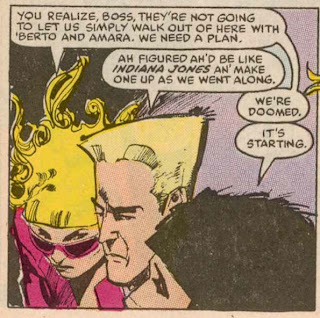 Young Love
Lila has no compunction against displaying her affection for Sam in front of others. 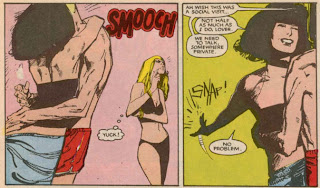 Lee and Magneto reconcile, and admit that they've become more than friends. 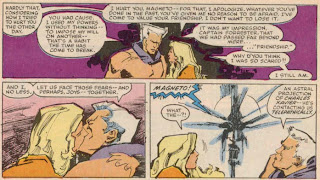 My Hero, Thomas Magnum
Amara asks Bobby what Magnum would do in their situation.

Human/Mutant Relations
Dazzler speaks to the difficulties of being a publicly-known mutant. 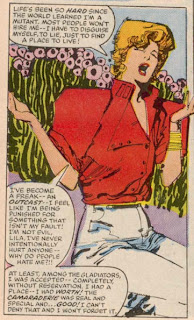 Teebore's Take
This issue is the first part in a three part story that marks Bill Sienkiewicz's final story on the title. It features Dazzler and the Gladiators from the wretched Beauty and the Beast miniseries, and ends with the return of an old friend, but beyond that, much like the previous Cloak and Dagger story, I don't remember too much about it. As a result, I was pleasantly surprised by how briskly paced this issue was. The story opens in media res, with Magma and Sunspot captured offscreen (following the setup to that in New Mutants #28), and where I would have expected the ultimate reunion between them and their teammates to not occur until at least the second part of the story, this issue ends with this contingent of New Mutants reunited, with Magma and Sunspot declining the opportunity to escape their captors because of the kidnapped children.

Granted, much of this brevity comes about because Claremont is forced to setup a tie-in with the forthcoming Secret Wars II, but perhaps that editorially-mandated crossover is a blessing in disguise. The concept of the Gladiators is pretty thin (and, as this issue points out, we've seen the New Mutants in a gladiatorial arena once already), and though Sienkiewicz can certainly draw the hell out of a fight scene, there's only so much that can be done in that regard before it becomes repetitive. Having to setup the tie-in material forces Claremont to keep the main narrative moving, and in this particular case, that's definitely to the story's benefit.

Next Issue
On Wednesday, we look at Nightcrawler's limited series, followed on Thursday by a pair of issues, Power Pack #12 and Secret Wars II #1.
Newer Post Older Post Home
Posted by Austin Gorton at 1:00 PM