The 2012-2013 network TV season officially ended this week (as of Wednesday night, I believe), but thanks to Revolution continuing to run out its thread, my usual backlog of shows (as well as a few more weeks of Game of Thrones), I've got at least a few more "Last Week in TV" posts coming your way before I take a much needed summer break.

The Simpsons: The Saga of Carl/Dangers on a Train (season finale) 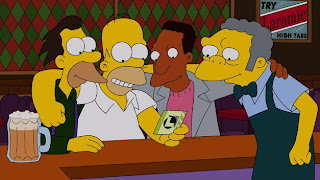 As far as latter day Simpsons episodes go, "The Saga of Carl" is one of the more original episodes we've seen in a long time. Carl as a character isn't someone who's received a lot of attention, and the concept of male friendship is something the show hasn't really examined much before. There was also some really strong animation in the Iceland scenes, giving the whole thing a look that was different than Springfield but still very much in the show's aesthetic.

"Dangers on a Train", while arguably the funnier episode of the two (I'm not sure why, but I cracked up at the revelation that both Lisa and Bart are named after trains), was much less original, functioning as it did as yet another Homer/Marge "relationship in peril" episode. It does get points, however, for making Marge the instigator of the marital issues rather than Homer, something that, while not unprecedented (heck, the very first Homer/Marge relationship episode of the series, "Life on the Fast Lane", featured Marge on the brink of having an affair with Jacques, the sleazy bowling instructor), certainly hasn't been trotted out as often as the usual "Homer is an ass, then has to win Marge back" trope.

Ben: Your Homer is the luckiest man on Earth!
Marge: Well, he keeps falling down the cliff and living, so I guess that’s true.

Ben: Finally, a reason to watch TV on Sundays. 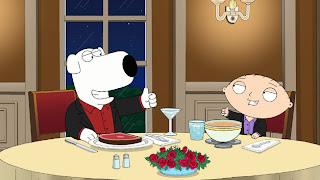 Of these three episodes, "Road to Vegas" is the clear standout, as the show returns to a tried and true format (the various Brian/Stewie road episodes) and manages to walk the line between being darkly funny and too dark to be funny that trips up some Brian and Stewie episodes. It was also structurally clever while leaving plenty of room for some truly hilarious beats. The other two episodes were far more standard far, filled with the usual hit-or-miss cutaway gags and plotlines.

Other Thoughts
Not that it matters all that much for this show, but "Road to Vegas" definitely felt more like a season finale.

In "Farmer Guy", I particular enjoyed Peter's fourth wall breaking efforts to acquire the farm, as well as Brian's reaction to being told he was going to a nice farm upstate and Stewie's inability to understand words when they're spelled out.

The highlight of "No Country Club for Old Men" was the ridiculously over-the-top identities Carter and Peter assumed: Viscount James Earl Tennis Racket and Duke of Lacrosse Team 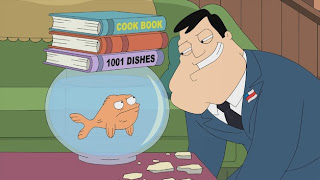 Klaus remains American Dad's most underdeveloped and bizarre character, a remnant of its early days when it was trying to find its identity and dabbled with a lot of "weird for the sake of being weird" elements. Where Roger grew out of those days to become, essentially, the show's built-in guest star of the week, Klaus just kinda hung around, a best-ignored talking fish. All of which is a lengthy preamble to say the idea of a Klaus-centric episode didn't exactly fill me with a lot of confidence, but the end result was a pretty decent episode, mainly because the episode avoided the cliche "Klaus tricks everyone into thinking he's Stan" routine by Klaus doing a terrible job of being Stan, and because Francine was more than willing to let Klaus have his fun for a few days.

Other Thoughts
The B-plot was standard Roger/Steve fare, elevated by the extended answering machine message sequence (complete with Steve acknowledging he shouldn't have an answering machine). 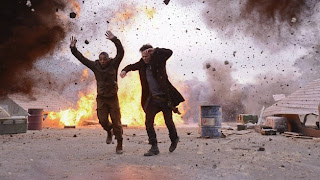 I've talked before about how this show tends to keep up a breakneck narrative pace, but a key element to this episode showcases the downfall of such an approach. In the span of one episode, the Georgia Federation is on the brink of surrender, all the gains made by its coalition with the Miles-led rebellion wiped out thanks to Monroe turning lose some drone bombers. Which, fine, whatever, but it would have been nice for a few lines of dialogue, in this episode or a previous one, setting up the drones. I can buy that even with power, it would take time for Monroe to find and outfit the drones, as well as locate the appropriate support equipment and personnel. But they appear here without warning, and for something that is threatening to completely unravel the show's current status quo (such as it is), their unheralded appearance is jarring.

Other Thoughts
This episode also underscored how completely pointless Charlie is - she was buried under rubble for most of the episode, and did anyone miss her?

Rachel admits she's just in this for revenge. Which is refreshingly direct for the character, and also an interesting place to take an ostensible lead of the show.

Monroe wrongly executing his last friend standing was an expected yet well-played beat for the character, though I'll miss Mark Pellegrino's Captain Baker, a character with a lot of potential.

Neville taking out six guys, while surrounded, and only getting shot once (in the shoulder) was pretty badass. 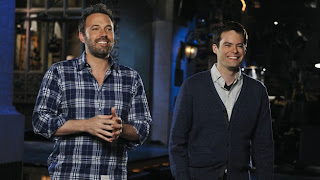 For the second year in a row, we have an SNL finale that is dominated by the act of saying goodbye to a departing cast member. Not only did we bid adieu to Bill Hader via a great Stefon sketch, but apparently Fred Armisen is leaving as well, as indicated by the final sketch of the night (Seth Meyers will, I believe, be around for the first half of next season, though the Stefon goodbye served equally well as a nice capstone to Meyers' time behind the Weekend Update desk). In terms of the episode itself, this was definitely a step up from the previous episode, ending a largely uneven season on a strong note. Affleck acquitted himself well, and though most of the sketches never quite managed to develop beyond their initial joke, credit is due for the relative lack of recurring sketches (better to try something new and fail than trot out The Californians again).

Other Thoughts
After pulling out all the stops for Justin Timberlake's induction into the Five Timers Club, it's not a surprise that the show didn't try to top it for Affleck, but acknowledging as much and making a bit out of it was an effective way of having the cake and eating it too.

Always nice to see Amy Poehler back behind the Weekend Update desk, especially for a "Really?!?" segment.

And so we say goodbye to Stefon, with a touching and hilarious bit that resolves his long flirtation with Seth. Has there ever been another character on SNL that managed to retire while still as popular as Stefon is?

My guilty pleasure sketch of the week: Ben Affleck pretending to be the uncle of a jerk who faked his death.

Jason Sudeikis has seemed to be perpetually rumored to be leaving for the last few seasons, and this one is no exception; given the lack of a proper goodbye (and the opportunity for more air time now that Hader and Armisen have left) I bet he sticks it out another season.

Now that Armisen is gone, who is going to play all the non-white, non-African American characters on the show (also, I had no idea who any of the people who came on stage with him were except for Carrie Brownstein)?

Also, Armisen departs as one of the shows longest-tenured cast members, eclipsed only by Al Franken, Seth Meyers and Darrell Hammond.

Next season should be fun to watch, as the show tries to reinvent self in the wake of the departure of so many longstanding cast members (continuing from Wiig and Andy Samberg's exits from last year).

Least Favorite Sketch: Probably the straight camp one, the course of which was obvious from the onset, but there was nothing absolutely terrible this week.

Episodes Featuring a Game Show: 5/21
Still surprised by how low this number is. It's even down from last season's seven.
Episodes Featuring TWO Game Shows: 1/21
Episodes Featuring a Talk Show: 12/21
Whereas I'm not at all surprised that over half the episodes featured a talk show (though if memory serves, a lot of that number is front loaded: we haven't had a lot of talk show sketches recently.
Episodes with a Monologue Featuring a Song: 10/21
Up from last season, when roughly a third of the episodes featured a song in the monologue, now we're up to almost half. Though again, more recent hosts have avoided this tendency.
Newer Post Older Post Home
Posted by Austin Gorton at 8:00 AM