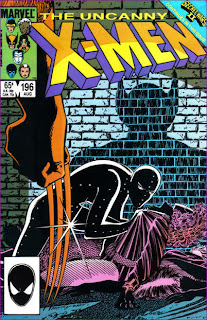 In a Nutshell
The X-Men work with Magneto to prevent a murder at Columbia University.

Plot
Professor Xavier is conducting a lecture at Columbia University when he telepathically picks up on a stray thought regarding a planned murder. Due to the limitations on his power as a result of his recent injuries, he's unable to probe deeper and identify the culprit, but resolves to bring in the X-Men to help prevent the crime from being carried out. Meanwhile, in Kenya, Storm is shot and left for dead by the hunters she had earlier fought at the bush station. Back in New York, the X-Men gather at Columbia and are briefed on the situation by Professor X. They are joined by Magneto, something which, despite their previous alliance against the Beyonder, leaves many of them feeling uneasy. Rachel is distracted by a familiar presence, and realizes the Beyonder is at the school, but he disappears before Rachel can confront him. Elsewhere, Nightcrawler meets with Father Bowen and discusses with the crisis of faith the existence and power of the Beyonder have triggered in him. That evening, a group of students sneak into an office at Columbia and set a bomb. 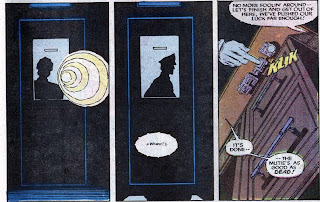 As Kitty investigates her portion of Xavier's student list, she interrupts a group with which she shares a seminar. Though she tries to play it cool, she quickly realizes these students were responsible for the attack on Xavier months ago, and are now planning to kill him before he can expose them. One of the students, Phil, remembers that Kitty attends Xavier's school, and calls her a mutie, prompting the group to try and kill her. At that moment, Rachel, Magneto and Xavier are in Xavier's office on campus, and when Rachel, detecting the presence of the Beyonder, creates a psi-link between her and the others, the use of her power activates the bomb in set by Phil and his companions. The other X-Men save Magneto and Xavier, but Rachel, sensing the attack on Kitty, flies off in a rage. She arrives as Kitty is being strangled by Phil, and when he fires a gun at Rachel, she turns the bullet back, intent on killing him. However, Magneto intervenes, begging her not to make the same mistakes as him and arguing that killing theses students would only confirm their worst fears about mutants. Rachel reluctantly stands down, but wipes the students' memories to protect Xavier and the X-Men. As they leave, the Beyonder watches, puzzled at the way Magneto argued against Rachel using her vast power. He realizes that to truly understand humanity, he must become human.

Firsts and Other Notables
Following on from Secret Wars II #1, this issue features Magneto working with the X-Men directly, within their own book, for the first time, further paving the way for his eventual role on the team.

Being a Secret Wars II tie-in as well, it also features an appearance from the Beyonder, having his shed his Molecule Man-aped form for one mimicking Captain America's body in Captain America #308. Thankfully, he does little more than lurk in the background and freak out Rachel. 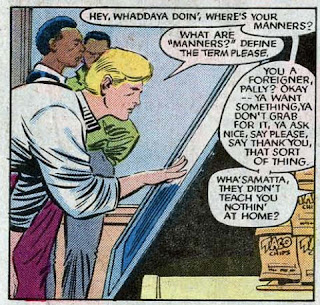 This issue has become somewhat infamous for the way Kitty equates the fictional racial slur "mutie" with the actual racial slur "nigger". It's something that echoes "God Loves, Man Kills", in which Kitty made similar pronoucements, but as that issue was a prestige format standalone issue aimed at the bookstore/comic shop market while this one is a regular issue of what was at the time one of Marvel's best-selling all ages titles, it's far more likely that the equivocation here reached a larger audience than the previous issue.

While the comparison of a made-up slur for a fictional race to a real-world term that represents deep cruelty, hatred and bigotry is overly-simplistic and trite, as I mentioned in my "God Loves, Man Kills" post, I still find it to be an effective comparison. Bearing in mind the audience for this book at the time was still largely what we'd call "tweens" these days, the direct and straightforward linking of fictional bigotry to real-world bigotry likely opened a lot of kids' eyes, making blisteringly-obvious that the struggle of the X-Men against prejudice can represent the struggle of all minorities against prejudice. It's by no means a solution to the problem of any kind, nor a be-all, end-all solution for prejudice, but for a thirteen-year-old kid reading it for the first time (as I was when I first read this issue), it was likely an eye-opening experience.

Ever higher rise the sales, with the Statement of Ownership declaring that the average number of copies of each issue sold per month in the previous year was 378,135, with the single issue nearest to the filing date selling 387,067 copies, up from last year's total of ~337,000 and ~359,000.

The Chronology Corner
The Beyonder, if you care, next appears in Secret Wars II #2.

A Work in Progress
Nimrod's status as a hero to the common man is referenced by one of the school cafeteria workers. 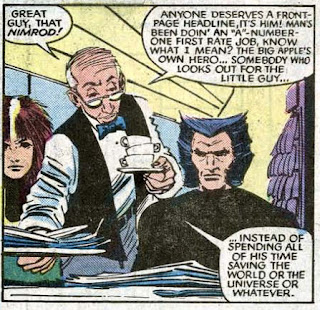 Nightcrawler is absent from the team's hunt for the killer in this issue, and is seen conferring with Father Bowen (Dagger's uncle, last seen in New Mutants #25) about his encounter with the Beyonder, whose god-like power has triggered a crisis of faith in Nightcrawler. 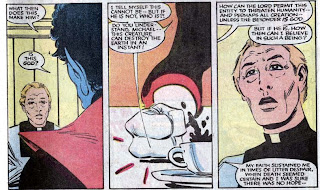 Rogue references her own past a villain when discussing Magneto's involvement with the team. Rachel also mentions that in her future, Magneto was a close ally of the X-Men (and Rogue manages to shut down another Rachel crying jag before it starts). 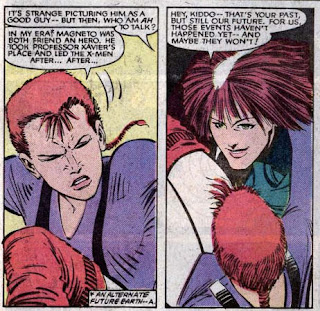 Wolverine, similarly, observes that for all the changes the X-Men have gone through, it's not hard to believe that Magneto could have changed too.

The Beyonder, observing the X-Men, notes that Rachel has the potential to be the most powerful of them all. 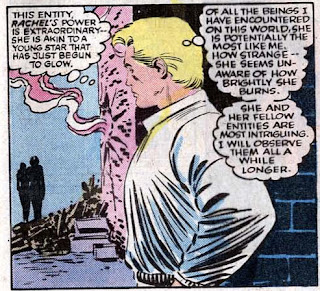 We get another Fastball Special in this issue, of the traditional variety. 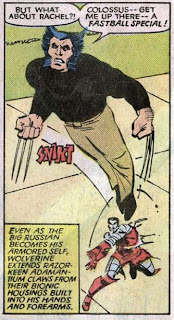 The X-Men see Rachel in her full Hound regalia, complete with facial scars, for the first time. 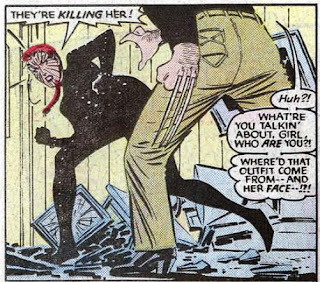 Magneto, in talking down Rachel, questions whether his actions to save mutants have actually made things worse. 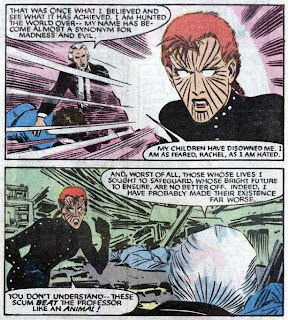 In a moment which echoes their first encounter in issue #150 (the first step towards Magneto's reformation), in which Magneto was horrified by the thought of having killed Kitty, the issue ends with Magneto carrying Kitty from the destroyed classroom, and Kitty musing that perhaps he is a hero after all.

I Love the 80s
In one of my favorite little continuity/character moments ever, it's established that Wolverine's healing factor prevents him from being harmed by the copious amounts of smoking, while also sneaking in a little anti-smoking PSA by having Kitty get sick after trying his cigar.

"Professor Xavier is a Jerk!"
Professor X hasn't told the X-Men the truth about his weakened condition, lying to them directly and saying it's being caused by an experiment he's running (to their credit, most of the X-Men can tell he's lying, but don't call him on it). 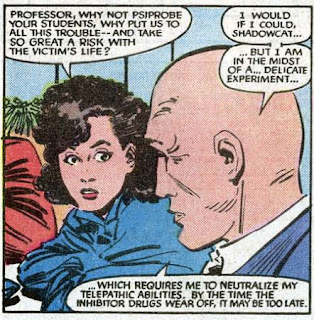 Young Love
Lee Forrester is with Magneto when he meets with the X-Men.

Human/Mutant Relations
Rogue and Rachel help save a man from being mugged, but he freaks out over the fact that they're mutants, and after he leaves, the women see that he was spray painting anti-mutant epithets when he was attacked. 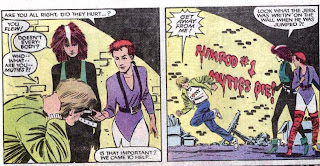 For Sale
We get one of our first ads for Nestle Quik, featuring the Quik Bunny, in this issue. 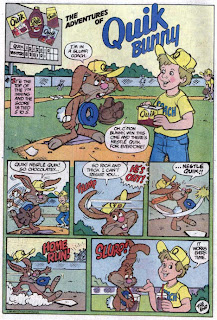 It's in the Mail
We finally get another letters page again, this one featuring letters discussing issue #186.

Teebore's Take
This is another favorite issue of mine from this era, and as with others of its kind, that's mostly for the way it advances the ongoing subplots and characters arcs while functioning less as a chapter in a story arc and more as a chapter in an ongoing narrative. But I also like it for being the first concerted effort (as opposed to the smaller efforts we've seen previously in things like "God Loves, Man Kills" and contemporaneous issues of New Mutants) to shift Magneto into a place where he can function as an ally to the X-Men. Their reaction to the presence of Magneto in their midst is a running thread throughout this issue (wisely, as his friendly presence is likely as jarring for the X-Men as for any readers who haven't been reading New Mutants and Secret Wars II), leading to some great moments of characterization. Kitty is initially distrustful, Rogue, recalling her own past, wonders who she is to judge, while Wolverine acknowledges the capacity for change while remaining cautious.

Yet it is in Magneto's interactions with Rachel, a character who, the story reminds us, grew up in a world in which Magneto fought side by side with the X-Men, that the change in Magneto's outlook is made clear. Both characters grew up in and are survivors of a holocaust, and when Rachel lashes out at the students who tried to kill Xavier and Kitty simply for being mutants, it is with a sentiment that deliberately echoes the more villainous Magneto of the past. Yet he argues now for a different path, explaining that he's beginning to see that his way of approaching human/mutant relations has not only failed, but made things worse.

It's a significant turn for the character, and juxtaposing him with Rachel, a character that has lived in the very world Magneto is trying to prevent, helps sell it. Magneto's reformation wouldn't be possible without "Days of Future Past" (because it establishes that Magneto's fears are well-founded) or the rise in anti-mutant sentiment that has colored Romita Jr's run (because it shows that Magneto's efforts thus far haven't worked). Rachel, for all her faults as a character (and they are many), represents both those ideas. Putting these two characters together then, comparing and contrasting them, helps both characters. For Magneto, it shores up his ongoing reformation. For Rachel, it's arguably the most effective use of the character during her tenure on the title.