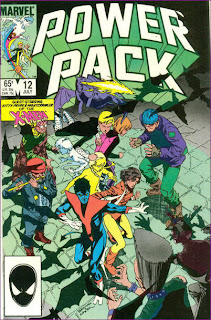 In a Nutshell
The Morlocks kidnap Power Pack

Plot
As Power Pack heads back into the sewers to retrieve their schoolbooks, left behind rescuing a kitten, they're attacked and captured by a group of Morlocks. Elsewhere in the tunnels, Nightcrawler and Kitty Pryde are meeting with Callisto. As they leave, they catch sight of the captured children and investigate. Power Pack, their powers suppressed by the power-dampening Morlock Leech, is told they were kidnapped to replace Annalee's recently murdered children. They manage to escape their bonds and trick Leech into leaving the room, enabling them to use their powers. Together with Nightcrawler and Kitty, they overpower the Morlocks. Power Pack explains to Annalee why she can't just steal other people's children, then leaves their kitten with Leech. The X-Men accompany them home, but later that night, Annalee tracks them down and vows to make them her children forever. 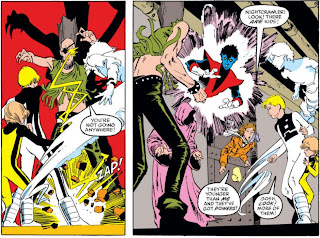 Firsts and Other Notables
Power Pack is the brainchild of former X-Men editor Louise Simonson, and the first series she started writing regularly when she left editorial to become a freelance writer (she sticks with the book for its entirety). It features the four young Power siblings, all of whom received various super powers from a dying alien. It was intended by Simonson to be a book aimed at children, though the general critical consensus is that it managed to do so while remaining appealing to adults. I haven't read as much of it as I'd like to, but I've largely enjoyed what I have read (mainly the issues that tie into the various X-books).

This issue is the first appearance of a group of Morlocks known as the Drain Dwellers: Erg, Ape, Tar Baby, Beautiful Dreamer, Piper (who appeared, unnamed and unseen, in Power Pack #11) and Annalee (who was previously mentioned but unseen in Uncanny X-Men #193). They are joined by Leech, the young Morlock who can nullify super powers. Simonson will use these characters again in future issues of Power Pack and X-Factor, and most of them appeared alongside other notable Morlocks in the 90s X-Men animated series. 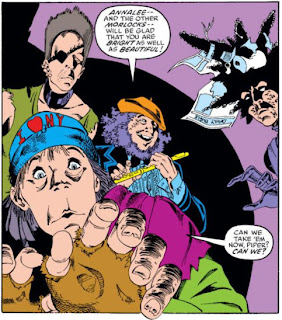 This story picks up on a plot thread established in Uncanny X-Men #193, which mentioned that Annalee's kids were killed by surface dwellers. We'll later learn they were killed by one of the Marauders, the group which will perform the Mutant Massacre. Here, we learn that Annalee has the power to project her emotions on others; in the wake of her children's murder, Callisto ordered Leech to live with her, in order to null her power and prevent the rest of the Morlocks from feeling her despair. The other Drain Dwellers, angry that Leech is suppressing their powers as well, hatched a plan to kidnap Power Pack and, via Beautiful Dreamer's power, brainwash them into believing they're Annalee's kids.

A Work in Progress
Nightcrawler and Kitty visit the Morlocks, with Nightcrawler delivering postcards from Storm's African vacation to Callisto and Kitty giving Caliban a gift from her trip to Japan.

It's specifically stated that, while Storm leads the Morlocks, she has tasked Callisto with, essentially, the day-to-day operations of the group in her absence, something which rankles Callisto. 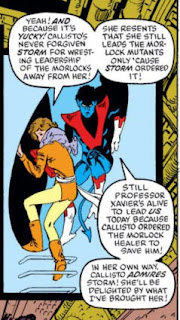 Leech is presented as looking slightly more human here than he did in his initial appearances. Also, when Power Pack suggests that Annalee take care of Leech in her childrens' stead, she replies that he's too ugly, which calls to mind the old adage about beggars not being choosy. 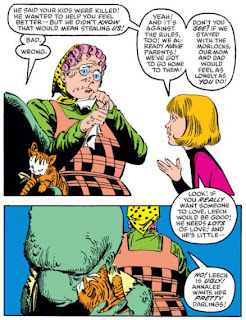 Kitty is said to be past fifteen; I believe later stories will establish that simply isn't true. 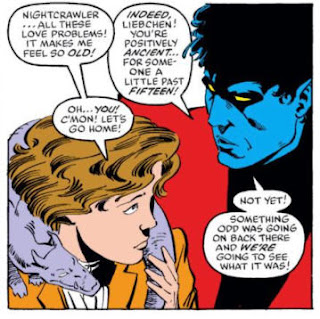 I Love the 80s
"Tar Baby" isn't the most racially sensitive name for a character these days.

Young LoveKitty teases Nightcrawler throughout the issue about Callisto's apparent crush on him. 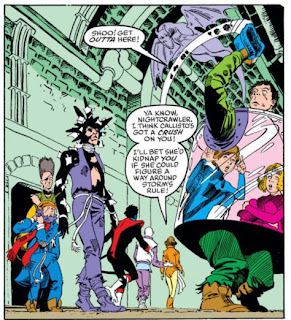 Teebore's Take
This issue begins Power Pack's long association with the X-Men franchise, born of Louise Simonson's role as both the creator and writer of Power Pack and (eventually) a contemporary of Claremont as the writer of both New Mutants and X-Factor. Following this issue, Power Pack will play a role in all three of the X-Men's annual summer crossover events that occur during the title's lifespan. In this issue, as with Dazzler #38, the X-Men function thoroughly as guest stars. Despite the antagonists coming from X-Men, Simonson keeps her title characters front and center, and it is they who ultimately save the day (for now). Nevertheless, using the Morlocks as the main component of the crossover (rather than the X-Men themselves) helps widen the confines of the X-Men universe. 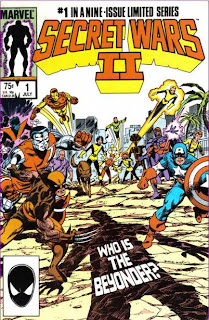 In a Nutshell
The X-Men and New Mutants, led by Magneto, confront the Beyonder.

Plot
The Beyonder arrives on Earth, near the suburban Colorado home of Molecule Man and Volcana. Taking a human form, he yearns to understand the nature of their reality. Molecule Man suggests that the key to understanding is experience.  At Volcana's suggestion, the Beyonder heads to Los Angeles, where, hoping to experience desire, he transforms a Hollywood screenwriter craving power into the super-powered Thundersword. Meanwhile, Professor X telepathically alerts Captain America and Magneto to the arrival of the Beyonder. The former heads to LA while the later rallies the X-Men and the New Mutants, as well as Dazzler and Lila Cheney. Rendezvousing with Captain America, the X-Men encounter Thundersword attacking NBC, and try to stop him. Soon Iron Man, alerted to the fight via the news, arrives as well. As the heroes battle Thundersword, Rachel detects another presence nearby, exposing the Beyonder, who reveals himself to the group. Wolverine attacks the Beyonder, but Lila, worried the Beyonder could destroy them all, teleports the X-Men away. As Captain America and Iron Man subdue Thundersword, the Beyonder realizes he needs to experience desire himself, and seemingly vanishes. Captain America heads back to New York, unaware that he is being followed by the Beyonder. 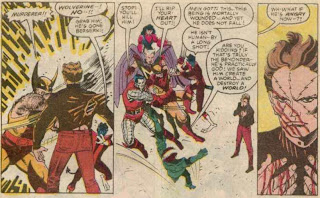 Firsts and Other Notables
Secret Wars II, obviously, is a sequel to the original Secret Wars. Whereas Secret Wars was a self-contained (albeit lengthy) miniseries, the events of which fitting clearly between specific issues of each of the various characters' series, the sequel is more of a sprawling mess, weaving in and around nearly every superhero title Marvel published in 1985 and 1986, sometimes on multiple occasions.

As before, it's written by Marvel EiC Jim Shooter, and he tags Al Milgrom to provide the interior art. Milgrom's art, as I made clear in my post on the Kitty Pryde and Wolverine limited series, does very little for me. It's cramped, cluttered, inconsistent, and all around subpar. With all due respect to Mr. Milgrom (who was a longtime Marvel editor and inker as well), to this day I still can't wrap my head around the fact that Shooter let his big, sprawling epic, intended to be a commercial juggernaut for the company, out the door with art this crappy.

The Beyonder arrives on Earth in this issue and takes a human form for the first time (in Secret Wars, he appeared only as energy/a disembodied voice). Though this series is infamous for eventually featuring the Beyonder in a very much (and much-derided) "of its time" leisure suit and Jheri curl, here he takes on a far more...interesting look, before eventually mimicking the Molecule Man's appearance.

In terms of X-aminations, I have no intention of covering every issue of this series, only the ones, like this, which feature the X-Men and/or the New Mutants in a significant capacity (and I'm still in the process of determining which issues those are, as my memories of this series are, thankfully, rather shoddy). And even then, those issues will likely be covered in a shared post like this one.

A Work in Progress
Xavier is seen at Muir Island, recovering from the events of New Mutants #26-28, along with Legion and the New Mutants present in that story. His weakened condition following X-Men #192 is referenced. And Doug, for some reason, has dark hair.

In a bit that I've always found both kinda neat and humorous, Captain America, who is flying commercial, commanders his plane to respond to the arrival of the Beyonder, something the pilot is happy to do for Cap, so long as Cap explains to the passengers why their flight is being diverted. 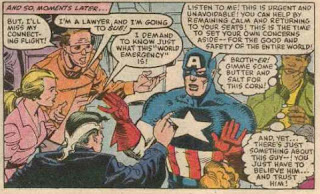 Magneto, answering Xavier's telepathic call to lead the X-Men against the Beyonder in his stead (as seen in New Mutants #29), arrives at the mansion and urges the X-Men to trust him. 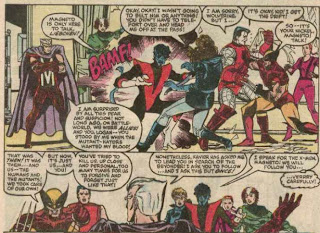 It's mentioned that the X-Men's jet is out of commission, leading Magneto to fly the team across the country in a limo. It's unclear when any damage to the Blackbird would have occurred, particularly since it should still be parked on Muir Island (as Xavier took it there in New Mutants #26).

The end of New Mutants #29 is expanded upon, as its revealed that when Magneto stormed into the Gladiator's arena in that issue, the rest of the X-Men were waiting outside. He's also shown contemplating seizing Amara and Bobby, who want to remain with the Gladiators, against their will, but decides against it.

Outside the arena, Sam argues against leaving Amara and Bobby behind, making his departure with Magneto in New Mutants #29 seem less abrupt. 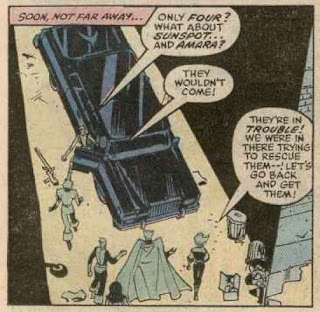 The Beyonder manifests Illyana's Darkchilde persona, leading her to freak out and teleport herself, as well as Kitty, Rachel and the remaining New Mutants, into Limbo. Their storyline will be picked up in New Mutants #30. 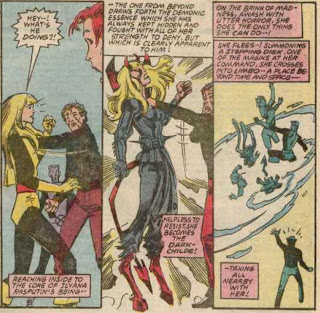 I Love the 80s
Thundersword rails against the evils of MacBurgers, a thinly-veiled stand-in for McDonalds (Colossus mentions he loves MacBurgers). 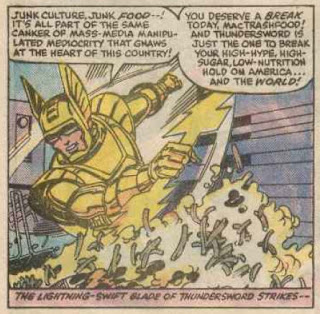 Rachel Summers, Crybaby
Even here, Rachel whines about having to use her powers to track someone down.

Teebore's Take
Following the commercial success of Secret Wars, its not a surprise that Jim Shooter would create a sequel, even if he wasn't the writer of both. But while the follow-up occasionally flirts with some interesting ideas and themes, it lacks the novelty, energy and scope of the original, and handles most discussions of those ideas and themes in the most obvious, hamfisted way possible. It's also let down by some truly questionable design choices and awful, awful art.

In the terms of this issue specifically and the X-Men's involvement in it, it is significant for the way it places them front and center for Marvel's (arguably first) big linewide event. Though the series will, by design, cycle its way through guest appearances from nearly all of Marvel's superheroes (including the X-Men again), it's notable that they're one of the series' first stops, and are essentially the main characters in this issue (along with Captain America and, to a lesser extent, Iron Man). That Jim Shooter turned not to Spider-Man, nor the Avengers or the Fantastic Four, to kickoff his big, commercially-motivated series is yet another example of how the rising popularity of the characters is becoming harder and harder to ignore, moving them ever closer to their longtime status as Marvel's cash cow.

Next Issue
Uncanny X-Men #195 follows up on the events of Power Pack #12, while New Mutants #30 shows what happens to Illyana and company following the events of Secret Wars II #1.
Newer Post Older Post Home
Posted by Austin Gorton at 2:00 PM