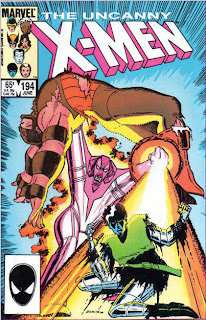 In a Nutshell
The X-Men save Juggernaut from Nimrod

Plot
A bemused Juggernaut walks the streets of New York as the town reacts to news of his return. Upstate, the X-Men, still recovering from their confrontation with Thunderbird and the Hellions, are awoken to reports of the Juggernaut being seen in New York. Though Nightcrawler is reluctant to send the weary X-Men into a confrontation with the villain, he agrees they're best suited for the job. Meanwhile, at a bush station in Kenya, Storm encounters a hunter assaulting a waitress. She intervenes, fighting off both the hunter and his sister. In New York, Rachel and Kitty keep watch as Juggernaut conducts some legitimate business in a bank. Suddenly, Nimrod, having located Juggernaut, attacks the villain, as well as Kitty and Rachel, whom he identities as members of the outlaw X-Men. Nimrod blasts Juggernaut across town, where he lands at a construction site, dazed.

The X-Men follow and reluctantly intervene in Juggernaut's defense. Nimrod quickly knocks out most of them, while Kitty phases inside him and learns he's a robot. As Rachel telekinetically topples an unfinished building onto Nimrod, Rogue, taking a cue from Kitty, absorbs the powers of most of her teammates. As Nimrod emerges from the rubble with Juggernaut, Rogue attacks him. Damaged and unable to effectively counter so many different powers at once, Nimrod teleports away. Recognizing the fight wasn't started by Juggernaut, Rogue lets him go, telling him not to make the X-Men regret helping him. In Moscow, KGB Colonel Vazhin looks over media reports from America calling the X-Men criminals while hailing Nimrod as a hero. Recognizing that the X-Men have risked their lives to save both the US and the world on countless occasions, he finds this hard to believe. With Magneto believing that any human government will ultimately try to destroy mutants, Vazhin worries that the American government is doing their best to prove him right.

Firsts and Other Notables
Though only their first names are revealed, this is the first appearance of Andrea and Andreas Von Strucker, mutant children of Nazi and Hydra villain Baron Von Strucker (whom Xavier and Magneto battled in the flashback depicted in Uncanny X-Men #161). They will eventually become the super-villains known as Fenris, then join the short-lived, loosely affliated group of villains known as the Upstarts in the early 90s. Much later, Andreas will become the new Swordsman and join the Thunderbolts in the wake of his sister's death. 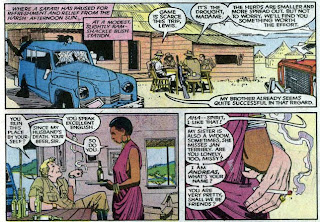 KGB Colonel Vazhin (spelled "Vashin" here) makes his first actual appearance in X-Men (he previously appeared in X-Men #123 and #124, but that was a robot created by Arcade and used to brainwash Colossus). He'll pop up occasionally throughout Claremont's run, though he rarely rises above the level of "recurring ancillary character" (he won't show up again until issue #263, with the subplot he introduces here largely going nowhere, for example). 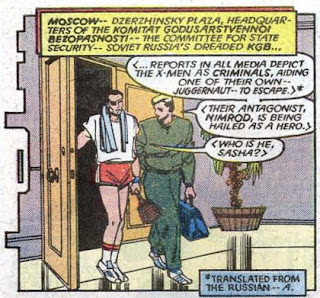 Though she has previously absorbed multiple powers at once (notably in her first appearance in Avengers Annual #10), this is the first time that we see Rogue absorbing multiple powers that affect her physical appearance, giving her Nightcrawler's blue fur and tail along with Colossus' armor. It's a neat visual trick that will be used again occasionally in the future.

As the issue ends with the city celebrating Nimrod as a hero, this begins a minor arc for that character in which he is embraced as a superhero, one willing to go further than most superhero in dealing with his foes, by the people of New York.

Steve Leialoha once again pitches in on inks.

The Chronology Corner
It's noted that Professor X is gone, called away shortly after the events of last issue, and a footnote points us to New Mutants #26-28.

A Work in Progress
Kitty's alarm clock radio is set to NPR.

Wolverine has noted Nightcrawler's leadership struggles, saying he's not a natural like Cyclops or Storm, though agreeing with Professor X that he's the best available man for the job (he also believes Kitty has the potential, but is still too young). 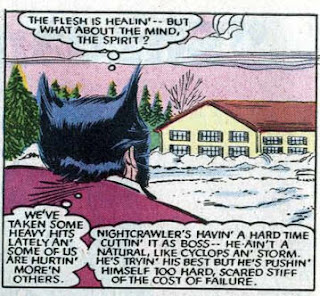 Colossus, in the wake of their confrontation in issue #183, is itching for a rematch with Juggernaut.

Our third issue in a row with a fastball special features Rogue as the pitcher and Wolverine the ball.

Juggernaut is wearing his skullcap, first seen in Marvel Team-Up #150, under his regular helmet.

Kitty uses the term "our age" with Rogue, once again suggesting Rogue is closer to Kitty's age than in her original appearances.

As with Storm in issue #185, Rogue notes that absorbing the powers and consciousness of her teammates is easier than usual because they're allowing her to take them willing. She also finds herself thinking and speaking in their terms.

She repeats Nightcrawler's trick from issue #192 of teleporting away with just Nimrod's arm. 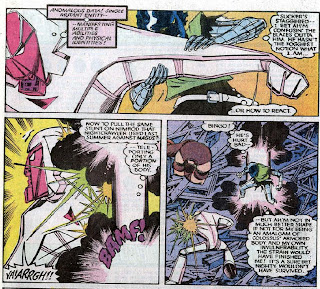 Rogue lets the Juggernaut go, saying that in this case he's done nothing wrong, and the X-Men are not the law. 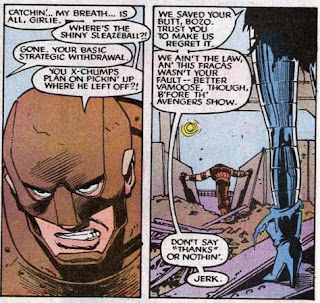 I Love the 80s
Nightcrawler has a small portable TV in his room. 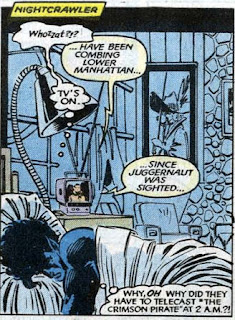 Rachel Summers, Crybaby Rachel starts her day angsting over the fact that she won't ever be born in this timeline. 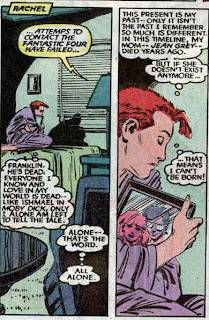 To her credit, she does manage to contain her tears later when Kitty casually mentions Jean Grey. 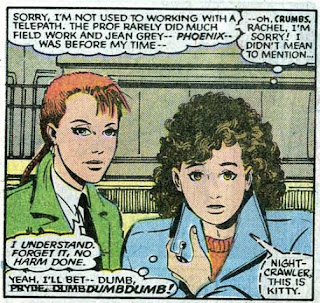 Human/Mutant Relations
A new reporter notes that despite being portrayed as villains by the government and media, both Spider-Man and the X-Men continue to help a public which fears and distrusts them. 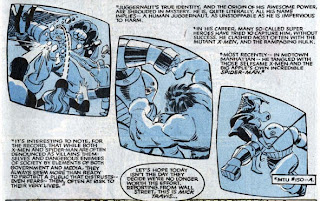 Colonel Vazhin finds it hard to accept the X-Men as villains, and worries that the US government's actions towards them may be proving Magneto right.

For Sale
In a nod to the increasing age of comic books' target audience, the back of the issue features an ad for an acne cream.

Teebore's Take
Another done-in-one "narrative chapter", this is one of my favorites issues from this era. In a lot of ways, it's a microcosm for what makes X-Men of this time so great. In the opening pages, Claremont deftly introduces each character with a brief snippet that illuminates their personality via their morning routine: Nightcrawler is exhausted from staying up watching a late movie, Wolverine has just completed a ten mile run, Rogue is rocking out in the shower to oldies (Rachel is, of course, moping). There are discussions at various times about how the public views the X-Men as a menace despite their heroic actions, which underscores the X-Men's reluctance to interrupt their quiet morning to go fight the Juggernaut (a sequence that always comes to mind whenever I'm forced to pull myself out of bed on a particularly cold, tired morning, because I am a huge nerd who routinely thinks of bits from X-Men comics in his daily life).

Then the action hits, and Claremont and Romita Jr. once again craft a clever and energetic fight sequence, hitting on the idea of turning Rogue into a visual "one man band" of X-Men. In the process, the X-Men find themselves defending one of their greatest enemies against an even great threat, one specifically designed to exterminate their species, and in the end, they let Juggernaut go free (not they're in much of a condition to stop him), specifically citing that they have no legal authority in the situation. This reinforces the realignment which occurred at the end of the last issue, which found the X-Men officially cast off the side of law and order and into a place where they must define justice in their own terms. And though the X-Men emerge victorious, the issue ends with another reminder that the public views them with distrust, that despite going out of their way to try to protect the city from a potential threat, they're still met with fear and suspicion. None of this is groundbreaking stuff, nor a significant event in the ongoing narrative, but it does serve as a snapshot both of the nature of the book at this time, with its balance of character, action and narrative progression, and one of the things that makes the X-Men great, their insistence to do the right thing despite being feared and hated for it.

Next Issue
Tomorrow we get to spend more time with Dazzler in New Mutants #29, and next week Dave Cockrum returns to the X-Men for the Nightcrawler limited series.
Newer Post Older Post Home
Posted by Austin Gorton at 1:00 PM