Game of Thrones 3x07: The Bear and the Maiden Fair 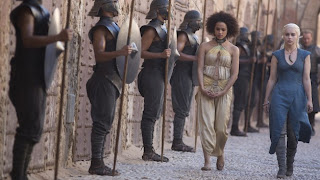 Harrenhal
He still tried to murder a kid, but Jamie continues to be a far more nuanced and interesting character than I ever imagined he'd be. Granted, he had a pretty good idea the guy that was tasked with delivering him to Kings Landing wouldn't let the bear eat him, but it was still pretty ballsy to leap into that pit unarmed (pun intended), and to do so entirely for Brienne's benefit.

Also, while getting mauled to death by a bear for the entertainment of others is pretty rough, I was expecting Jamie to walk-in on something far worse (ie sexually depraved) at the end there.

I'm curious just how far Jamie will be willing to go in keeping his word to deliver the Stark girls to their mother. Assuming he ever does make it back to Kings Landing (and the way most people on this show rarely make it where they're heading, that's a pretty big assumption), will he go so far as to defy his father and send Sansa home? Would he venture out to track down Arya?

The Fiery Batcave
To the shock of absolutely no one, Arya will not be returning to her family at Riverrun in a quiet, uneventful manner, as she finally gets fed up with all the hypocrisy on display with the Brotherhood and runs off, right into the arms of the Hound. Ruh-ro.

For the most part, I'd like to see the characters on their various journeys reach their destinations (ie I want Dany to return to Westeros, Jamie to get to Kings Landing, Bran to get...wherever the hell he's going), but in Arya's case, going back to her family would be far less interesting than watching her continue her journey towards whatever it is she's destined to become (because something tells me a life of relative normalcy amongst her family isn't in the cards for her).

Riverrun (or thereabouts)
The scene between Robb and his wife was a perfect microcosm of what drives me nuts about their relationship: he's trying to fight a war, and she's distracting him with sexy time (he actually says at one point "I can’t plan a war with you looking like that"). Not that I can't understand the impulse, but it's all the more frustrating considering it feels like Robb hasn't done anything active in the war since, what, early in season two?

That said, the whole "that was some great sex, now I'm going to write my mother" transition cracked me the hell up.

On the Road (But Not into the North, Because Tonks Won't Have It!)
Aside from a little backstory on Osha, this was another installment that did little more than trickle Bran's plotline along, as we learn he's decided that he needs to seek out the three-eyed raven North of the Wall. Intriguing, but it remains a rather nebulous goal. But hey, Hodor!

Also, it seems that "I am yours, and you are mine" is the Wildling way of saying "we're married".

Just South of the Wall
I've become a little unclear on the Wildings objective here - at first, I assumed their goal was to climb down the other side of the wall, and follow it to Castle Black, in order to attack from that side and throw open the gates for Mance and the rest of their forces. Now it seems like they're penetrating deeper into the South, unless they're just trying to swing wide of the castle and come at it straight on or something. I'm sure this'll all be made clear eventually, but for now, I'm curious what the plan is.

Also, I'm hoping that at some point in the series, we're shown exactly why Ygritte is so confidant that Mance is so different from previous kings beyond the Wall. I mean, I liked the cut of his jib when we met him earlier in the season, but I'm with Jon: I've seen little to suggest his attempted invasion of the south will succeed where others have failed (unless we're supposed to assume he has the edge because his invasion is being driven by necessity, on account of the increased White Walker activity. Desperate times, and all that).

Ygritte's "you know nothing, Jon Snow" catchphrase has almost reached the point where it's more ironic than anything. Things just from this episode that Jon clearly knows about: warfare, history, and windmills.

Apparently Ygritte won't love Jon "when you find out what he really is"; I've been made aware of some of the fan theories regarding Jon (which I won't share here as everyone that wants to know them probably does already), but I'm curious if that comment ties into that, or is just an indication that the Warg knows/believes that Jon isn't as loyal to the Wildings as he's pretending (something Ygritte realizes for herself later in the episode, not that she really cares, because they're Wildling-married now).

Winterfell (Probably)
Man, that was especially cruel, even before Theon's captor (presumably) went all Lorena Bobbit on him (look it up, kids!). In all seriousness, I really hope this plot line either goes somewhere soon or disappears for awhile, because watching Theon get tortured for torture's sake really isn't all that interesting, no matter how many boobs are involved.

Yunkai
I continue to enjoy the heck out of Dany as it becomes more and more clear she's not just interested in acquiring the resources to reclaim her throne, but also to liberate as many people as she can along the way, but I worry that approach is going to bite her in the ass eventually (also, someone offering her all the boats she'd need to invade Westeros, only for her to turn down the offer, has to be a poke at the audience, right?). Just putting aside in-universe concerns, dramatically speaking, there's only so many times the narrative can play the "her foes underestimate her, and she easily wipes them out" card before it loses its punch. George R.R. Martin isn't one to make things easy on his characters, so while I'd love to see Dany steamroll her way into Westeros riding a wave of popular support from all the people she's freed, I suspect we're a long ways away from that.

King's Landing
Every since he strode into the throne room astride his horse to claim his mantle as Hand of the King, we've been waiting for a Tywin/Joffrey showdown, and this one didn't disappoint, as Tywin quietly and subtly shames his grandson, never giving him an opening in which to lash out and speaking to him in a way that says "I think you're a twit, and you'll do as I say" but without ever saying anything Joffrey could object to directly enough to prompt an outburst.

Their discussion also allowed for a convenient bit of "here's what they know" exposition, as its established that word of Dany's dragons have reached Westeros, though Tywin, not surprisingly, easily dismisses them. I don't know that he's wrong (are Dany's dragons full grown now, or still juveniles?), but I suspect he is, considering the way the return of magic to the world (something most of the people in Kings Landing are still largely unaware or skeptical of) is tied into the return of dragons, and I would love to someday see one of Dany's dragons with a head the size of a carriage eat Joffrey.

Sansa, via her naivete, remains one of the show's most unintentionally hilarious characters ("unintentional" in that the character doesn't realize she's funny; the writers, obviously, are aware of it). But aside from the hilarity of her sheltered upbringing, her conversation with Margaery did a lot to illuminate Margaery's character as well. Her comments on how boys are raised by their mothers was especially intriguing in light of Joffrey: how much of his reprehensible behavior was informed by his mother (who, while certainly no angel, isn't quite the depraved monster her son is), and how much of it is just a function of who he is. Margaery, assuming she wasn't just blowing smoke at Sansa, seems to believe she will eventually wield power through control of her son, yet all throughout this season we've seen Cersei struggle with that very thing, as it becomes more and more clear that she's lost control over her son.

I love Bronn, as his conversations with Tyrion are always a delight. Less so Shae who, at least in her scenes with Tyrion, is becoming more and more annoying.

Gendry learned that he's the son of Robert in this episode; I guess I never realized he didn't know that (probably because he was well aware he was a bastard), but it makes sense that he wouldn't.

Similarly, we learned that Tywin was once Hand to the Mad King, another little tidbit I don't think the show had previously established.

Also, did we know previously (via the show) that Melisandre was once a slave? That was another interesting bit of background information.

That overhead shot of all the sunken ships in Blackwater Bay was pretty neat.

Should Margaery actually marry Joffrey and Sansa marry Tyrion, Sansa would be Margaery's aunt. Just feel it's worth stepping back and pointing these things out occasionally. :)

Other Thoughts
No Sam and Gilly, or anyone else from the Night's Watch, nor Cersei.

Not as strong a central theme to this episode as in week's past, though there was a lot more romance and focus on/discussions of couples (romantic and otherwise) throughout, between Robb and Talisa, Jon and Ygritte, Jamie and Brienne, even Osha's story, etc.), but it did continue this season's trend of strong transitions from one segment to the next, something which helps everything feel like part of a narrative whole rather than just a series of standalone vignettes.

If you didn't notice in the opening credits, this episode was written by George R. R. Martin. Whereas last season he wrote the seminal "Blackwater" episode, essentially the climax of the season and a high-water mark for the show, this one was much more of a standard, place-moving episode. Not that it was badly written or anything; it's actually kind of fun that Martin wants to work on an episode like this, instead of always handling a narratively significant or structurally unique episode.
Newer Post Older Post Home
Posted by Austin Gorton at 10:00 AM