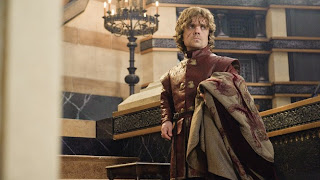 On the Road
So the Hound professes to be taking Arya to her family after all (for the money), which probably means the Hound is about to meet a grisly end, since I continue to doubt Arya will ever be reunited with her family. Nevertheless, I enjoyed the dig at the Brotherhood Without Banners, as the murderous Clegane is actually trying to do what the Brotherhood promised but ultimately failed to do.

Yunkai
So Dany gains an additional two thousand troops, (all presumably mounted cavalry), bringing her total force up to roughly ten grand, pretty much just because she's hot. Which, fine, whatever, but the better things go for her, the bigger, I fear, her ultimate downfall will be.

Of course, the presumed-addition of this Naharis guy into Dany's makeshift Small Council will introduce a fair amount of in-fighting within her ranks, as neither Jorah nor Barristan strike me as the type to be all that welcoming to a mercenary who killed his leaders and joined up because he wants to screw Dany.

The discussion about how Dany's Dothraki is getting rusty was a nice acknowledgement of the characters' history and a reminder of just how far she's come since the beginning of the show.

Dragonstone
For the second week in a row, we get a scene featuring boobs undercut by the threat of bodily harm to a guy's junk.

I'm a little unclear on what the deal with burning the leeches was meant to indicate. Obviously, there was one leech for each of Stannis' rivals for the throne (not counting Dany), but it wasn't clear what he was saying as he cast each leech into the fire. At first, I thought they were going to trigger some kind of attack, and when that scene cut to Joffrey at Tyrion's wedding (which was regardless a nice transition), I was prepared for a scenario in which Joffrey threatened Sansa, then was struck down by whatever those leeches did, with Sansa getting blamed for attacking the king. But nothing actually happened, so...what did the leeches signify? And how were they supposed to prove anything to Davos?

Speaking of Davos, yay, he's out of jail (and coming along in his reading)! The scene between him and Stannis was well written and performed, and hopefully it means that Davos will once again be allowed to counsel Stannis in opposition to Melisandre.

Stannis also made a good point (one we've discussed here before) about how it's a lot easier to follow a religion when you've seen firsthand some of the magical things done in its name.

Stannis mentioned seeing a vision of himself fighting in the snow - either a sign that Stannis may head north at some point, or an indication that the Stark family motto will become more and more true and the north may be heading south.

Melisandre's "come fight death with me" is a pretty great euphemism for sex.

King's Landing
Wow, so Tyrion and Sansa got married. At the rate plots progress on this show, I didn't expect that to happen so soon, but I'm glad it need.

His offscreen killing of Roz aside, it's been pretty quiet on the "Joffrey is a noxious, reprehensible twit" front this season, but he made up for that in this episode, first by taking away Tyrion's step ladder during the ceremony, then by threatening to rape Sansa. Whatever those leeches are supposed to do to him, I hope it happens soon.

However, I was surprised (and relieved) that in the end, Joffrey apparently didn't visit Sansa in the night, since Tyrion was actually much drunker than I thought and would have been unable to stop it (I suspected he may have been play acting just how drunk he was, especially after threatening Joffrey). Presumably Joffrey got distracted by something else?

Speaking of, Tywin may be a dick, and doing so entirely for selfish reasons, but I did appreciate both the way he silenced the laughter at Tyrion's expense during the wedding and the way he cooled Joffrey down (and prevented the "bedding ceremony" from occurring) after Tyrion's outburst.

I was hoping Sansa might have had presence of mind enough to kneel down for Tyrion during the ceremony without needing to be asked (as a sort of sign of "we're in this together"), but I suppose she was still pretty clueless and (understandably) self-centered at that point.

Lady Olenna pointing out all the convoluted relationships in the wake of the various weddings was pretty freaking hilarious. As was Cersei's rebuff of Loras (who gained a lead in the "who's getting the worse deal out this?" race).

Tyrion referencing the Night's Watch oath when declaring his intent to not sleep with Sansa unless she wants him to was a nice touch.

North of the Wall
Sam and Gilly continue to star in Westeros version of a delightful family sitcom ("He's got book smarts, she's got street smarts. The laughs will flow like ice in the wilds of the North, Sundays at eight!"), at least until a White Walker shows up for Gilly's as-yet-unnamed baby and Sam discovers that the First Men found a way to kill the Walkers.

While it was clever of Sam to use the dagger, it's a shame that, in their fear, they left it behind...

Other Thoughts
This was one of the most focused and thematically-connected episodes of the season, if not the series. While not as singularly-focused as last season's "Blackwater", here we dealt with really only three locations (with a brief header and footer set at different placesat the beginning and end). I get why the show can't be this focused all the time (even at 3-5 settings/groups of characters an episode, we'd likely go three episode or so without seeing certain characters and plot lines advance), but it's still nice to know that the show is willing to break convention and shelve a good chunk of if characters occasionally.

As a result, a ton of characters/settings were absent from this episode: Jamie and Brienne, the Brotherhood, Robb and his army, Harrenhal, Bran, Theon (thankfully), Jon and Ygritte.

This episode was written by showrunners David Benioff and D.B. Weiss.

No new episode next week, due to the Memorial Day holiday and HBO airing Behind the Candelabra.
Newer Post Older Post Home
Posted by Austin Gorton at 1:00 PM