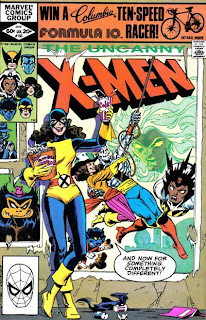 Plot
As the X-Men recover from their battle with the Hellfire Club and repair the mansion, Colossus and Kitty put Illyana, Colossus' little sister, to bed. To help her go to sleep, Kitty tells her a story with characters modeled after the X-Men. In the caliphate of Nhu Yorkh, Pirate Kitty and Colossus meet a wizard named Xavier and a cursed prince named Cyclops who are on a quest to save Cyclops and his kingdom from Xavier's apprentice, Princess Jean, who has been consumed by darkness and transformed into Dark Phoenix. Just then, Jean attacks, destroying Pirate Kitty's boat, but Xavier is able to drive her off with a crystal containing her soul and Pirate Kitty is able to prevail on the dragon Lockheed to provide them transport. Outside Illyana's room, Wolverine joins Nightcrawler listening in on Kitty's story. 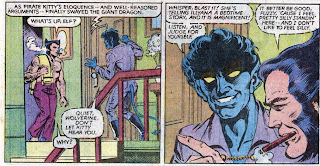 Meanwhile, Pirate Kitty and her friends land on an island to rest, where Kitty encounters Bamf, a teleporting, puckish elf while Colossus frees a genie named Storm from her enchanted bottle. Both agree to join the quest to defeat Dark Phoenix just as an ogre named Mean appears, declaring that Cyclops stole Jean from him, but Lockheed convinces Mean to join their quest as well. As the group travels on, the rest of the X-Men join Wolverine and Nightcrawler outside Illyana's room. Pirate Kitty and her companions are suddenly attacked by Dark Phoenix, and together, manage to hold her off long enough for Xavier to use the soul crystal to defeat the darkness inside her. Princess Jean is restored and the curse on Cyclops is lifted, and they all live happily after. As Kitty and Colossus leave a sleeping Illyana, Kitty is mortified to find the rest of the team was listening in on her story, but Cyclops tells her it was great, and thanks her for the ending.

Firsts and Other Notables
"Kitty's Fairy Tale", though not a groundbreaking epic like "Dark Phoenix Saga" or "Days of Future Past", is generally considered an all-time classic by most X-Fans and is often cited as being one of many fans' favorite issues.

Because this is comics, the world of Kitty's fairy tale was later revealed, in the third issue of Nightcrawler's limited series, to exist in an alternate reality, one labeled in Earth-5311 in an issue of the Official Handbook of the Marvel Universe (though the events of Kitty's story in this issue are still considered fictional within the Marvel Universe; only by mere coincidence do some of the places and inhabitants of Earth-5311 star in it).

The Pini fairies in Kitty's fairy tale world are named for Wendy and Richard Pini, the creators of Elfquest. Kitty is also wearing an Elfquest t-shirt throughout the issue.

In her story Kitty recasts the X-Men's Blackbird jet as a dragon named Lockheed; this will later be the name she gives the purple alien dragon she meets during the Brood saga. Also, in a neat bit, Lockheed the dragon references the events of issue #143, in which Kitty severely damaged the Blackbird jet.

A Work in Progress
As the X-Men once again work to repair damage done to the mansion (this time by the Sentinels and the Hellfire Club in issues #151-152), Professor X notes that they are running low on the funds and expertise necessary to effect the proper repairs. 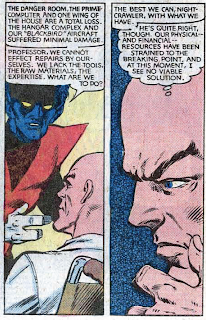 Colossus' sister Illyana is still living with him at the mansion following the events of issues #145-147. Apparently she managed to evade capture by the Hellfire Club last issue.

Professor X has telepathically taught the X-Men Russian so they can communicate with Illyana, though it probably would have been easier to just teach her English. 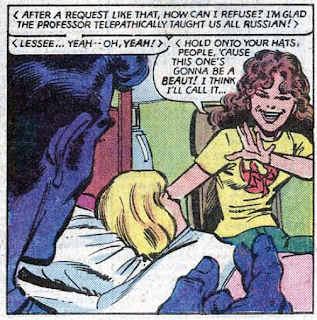 Carol Danvers is still hanging with the X-Men, following the events of Avengers Annual #10.

I Love the 80s
Illyana has a pretty sweet Fozzie Bear stuffed animal.

Lockheed the dragon occasionally refers to Pirate Kitty as "Colleen". I have no idea if this is some kind of colloquialism that is no longer used, or an Irish thing (Lockheed speaks with the patented Claremont Irish brogue for some reason) or what. 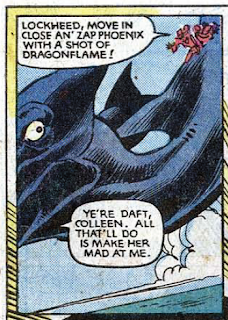 Claremontisms
Claremont revisits "Dark Phoenix" again, using it as the basis for Kitty's story. Also, this issue marks the first appearance of a device which Claremont will use often moving forward: a cluster of speech bubbles in which the speakers are unknown. 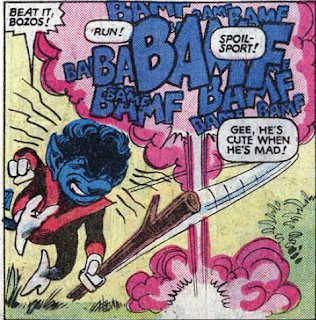 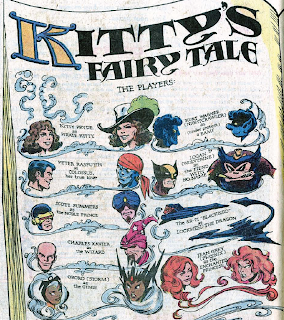 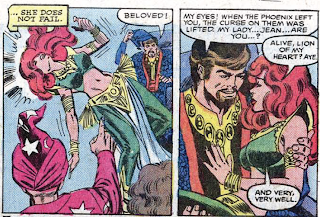 Dave Cockrum on "Kitty's Fairy Tale"
"That's one of my favourites. Chris and I co-plotted it, but it was my idea in the first place. I had just been re-reading my T.H.U.N.D.E.R Agents collection and there's a story in there called 'Weed's Fairy Tale'...in that story he was telling his niece and nephew a fairy tale and he was using the T.H.U.N.D.E.R Agents characters...It was a fun story and I said to Chris, 'Why don't we do our own fairy tale?' I explained my reasoning and he jumped right on it. Next thing you know he's giving me so much material that it should be a double-sized issue or a two-issue arc. I think Louise Simonson was editor then, and she says, 'Well, we haven't had a chance to advertise it as a double-sized issue and I don't think the powers-that-be would think it is a strong enough story to do over two issues.' So we had to cut the material down some. There'd been a fight involving fairytale Avengers as part of the storyline, but we cut that out entirely. I think it's one of our most popular issues."

Teebore's Take
This issue is without a doubt Dave Cockrum's X-Men opus. It is a story written to his swashbuckling sensibilities, to his love of whimsy and fantasy. As a result, he turns in some of his best art since returning to the book to help craft a tale that has become an X-Men classic (Claremont clearly has a lot of affection for this issue as well: he chose it for inclusion in his Marvel Visionaries volume). The amount of fun both creators must have had in crafting this story is clearly evident on the pages. But the first few times I read this issue when I was a teenager, I wasn't a big fan of it. At the time, I was very concerned with comic books (and science fiction in general) being taken "seriously" and as a result, I tended to look down on any whimsical stories for fear they would reinforce the notion that comics are just for kids (this is also why I have read very little Douglas Adams or Terry Pratchett; I didn't like a lot of humor in my science fiction, either). I've since learned my lesson, and returning to this issue again, I have much more appreciation of it than I did when I was younger.

Claremont gets a lot of flak, in some cases deservedly so, for returning so often to the "Dark Phoenix" well, especially during this period, but returning to it here in order to present a happy ending is worth the repetition. Scott's appreciation of Kitty for presenting a world in which he and Jean live happily ever after has a certain poignancy I completely missed in past readings. In terms of the grand X-Men narrative, this story probably isn't required reading: nothing terribly significant or groundbreaking happens to any of the characters. But to overlook it would be a shame, as it's simply twenty-two exceptional pages of good old-fashioned comic book fun.

Next Issue
The return of Corsair and the beginning of the Brood arc.
Newer Post Older Post Home
Posted by Austin Gorton at 8:00 AM