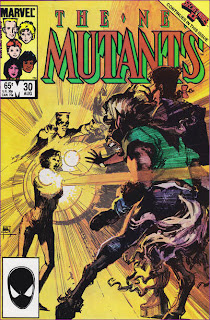 In a Nutshell
Kitty, Rachel and Dazzler help the New Mutants infiltrate the Gladiators.

Plot
Sam, Kitty, Rachel and Dazzler find themselves in Limbo, where Illyana had teleported them in the wake of their encounter with the Beyonder. As a result of that encounter, Illyana's Darkchilde side has been released, causing Limbo to go as mad as its mistress. Wresting her Soul Sword from her, Kitty uses the weapon to restore Illyana to normal. Still seeking to free the captured Roberto and Amara from the Gladiators, Illyana returns the group to Los Angeles, where they once again track down the Gladiators. Dazzler offers to infiltrate the group, and though everyone else decides against it for fear she won't be able to resist the lure of fame, she goes anyway. Welcomed back by her old friends, Dazzler is forced to take an inhibition-lowering drug to prove her loyalty. Later, Kitty, posing as a technician, gets a job working for the Gladiators. As Dazzler revels once more in being a star, she tries to win the trust of Roberto and Amara. Following a practice session, Kitty triggers a blackout and seeks out Roberto.

Having confirmed there are no child hostages, she gives Roberto the details of their escape plan. Outside the arena, Sam, Illyana and Rachel are waiting for the signal from Kitty to alert the cops when they're visited once more by the Beyonder. Rachel attempts to make contact with him, but nearly dies in the process, forcing Sam to blast off with her and Illyana. Inside the arena, Kitty tries to inform Dazzler of the plan, in the process reading her diary and realizing she intended to leave the Gladiators after all. However, Dazzler suddenly attacks Kitty, and Kitty awakens to find herself the prisoner of the Gladiators' true leader, a strangely-familiar telepath who had taken control of Dazzler. That evening, Roberto and Amara, still waiting for Kitty's signal, enter the arena to find themselves facing a monstrous creature, one which is, unknownst to them, a robot containing a mind-controlled Kitty.

Firsts and Other Notables
This issue is a Secret Wars II tie-in, as indicated by the little yellow insignia in the top right corner of the cover, and opens with Kitty, Rachel, Dazzler, Sam and Illyana in Limbo following the events of Secret Wars II #1. The Beyonder, still looking like Molecule Man, also appears in the issue.

The letters page returns this issue with a two page installment. An editorial response announces the imminent return of Karma and Bill Sienkiewicz's departure from the title (next issue will be his last), though here it's said he's only taking a break to work on a Daredevil graphic novel (what becomes, I believe, Elektra: Assassin). 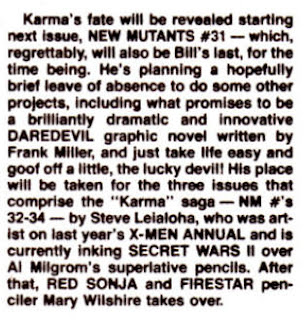 Another response teases a future issue in which Amara will come face-to-face with one of her gods; this story will not see print until issue #81, when it runs as a fill-in.

The Chronology Corner
This issue follows immediately after Secret Wars II #1, detailing what happened after Illyana teleported into Limbo with a contingent of X-Men and New Mutants. Kitty and Rachel will appear in the next issue, before returning to X-Men for issue #196.

A Work in Progress
Her Darkchilde persona brought forth by the Beyonder, Illyana's Soul Sword is black instead of silver.

When Kitty forcibly takes it from Illyana, Illyana's armor suddenly transfers to Kitty as well.

Kitty says the Beyonder owes her two: one for taking her love from her (as it is the Beyonder that led to Colossus falling in love with Zsaji), and another for tormenting Illyana. 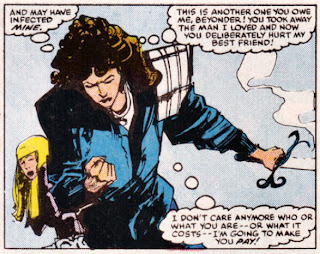 It's been awhile, but we're reminded that while Roberto is super-strong, he's not invulnerable.

The actual leader of the Gladiators is shown to be extremely large, and contacts Karma's villainous uncle for "added insurance". 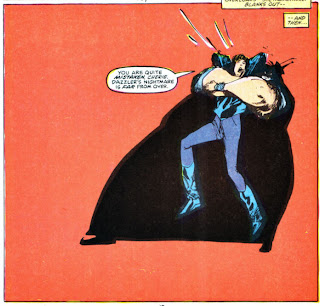 I Love the 80s
Sam mentions that the Avengers have a toll free 800 number tip line.

Artistic Achievements
The issue ends with Roberto and Amara facing off against a gigantic opponent in the arena who is actually Kitty within the body of a robot. That twist is pretty standard fare for this kind of story, but Sienkiewicz, not surprisingly, turns in a truly unique and monstrous look for the creature the two New Mutants must face. 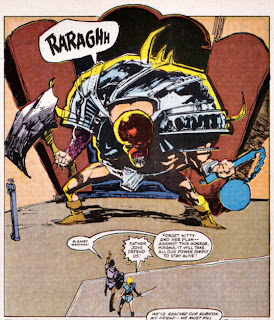 Like a Phoenix From the Ashes
Rachel compares reading the Beyonder's mind to the stories she was told about Dark Phoenix. 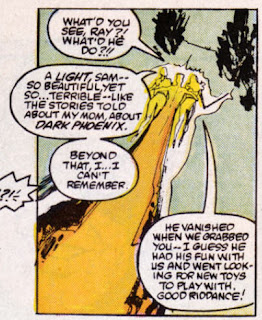 Human/Mutant Relations
The New Mutants are reluctant to go to the police for help freeing Sam and Amara from the Gladiators, fearing they'd be thrown in jail themselves given the current attitude towards mutants. 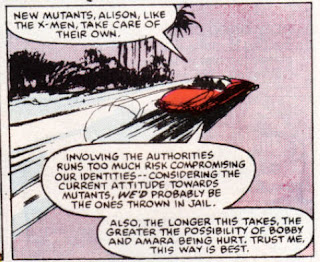 Teebore's Take
Secret Wars II continues to wind its way through the title, and Claremont continues to use it as an opportunity to keep an otherwise-routine story from bogging down too much. The issue-opening jaunt to Limbo gives Sienkiewicz a chance to cut loose, while the inclusion of Kitty and Rachel in the story and the deepening of the mystery surrounding the real power behind the Gladiators keeps things from covering too much of the same ground as last issue. Claremont also gets some mileage out of guest-star Dazzler, handling the lure of the Gladiators and her addiction to fame in just a few pages much better than the interminable Beauty and the Beast limited series ever did.

To be clear, nothing here is anywhere close to the level of craft and imagination on display in either the "Demon Bear" or "Legion" stories. But by taking advantage of Secret Wars II and some X-related guest stars, Claremont is able to keep an otherwise genre-standard story from dragging out like the Cloak and Dagger storyline did. At the end of the day, this story continues to be about little more than mutants fighting each other in a gladiatorial setting, but at least Claremont and Sienkiewicz are keeping things moving.

Next Issue
The Beyonder tour continues in Uncanny X-Men #196, while the Gladiator story (and Bill Sienkiewicz's run) wraps up in New Mutants #31.
Newer Post Older Post Home
Posted by Austin Gorton at 12:30 PM