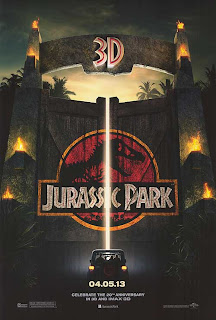 This review kept getting pushed aside by other posts and is thus a little out of date, but I figured what the heck, I had it written so I may as well post it...

Because Mrs. Teebore had never seen it on the big screen, we made a point to check out the recent 3D re-release of Jurassic Park, more to experience the film in a theater than for the 3D conversion. As expected, that conversion added very little to the experience; like most post-conversions, the goal here was simply to add some depth to the film, creating layers out of, say, the foliage in the background. The end result is meant to create a more immersive experience, but this was undercut for us somewhat by the fact that the screen we saw it on was one of the theater’s smaller ones, and thus, there was an obvious edge on either end that shortchanged that immersive experience (of course, that’s not the fault of the film). There was also the usual 3D problem of the film seeming dimmer than usual because one has to watch it through colored lenses.

But revisiting the film on the big screen was nevertheless an enjoyable experience. I remember seeing it when it was first released, back in 1993, but it’s been many years since I’ve seen it in any way other than in bits and pieces on cable. As a result, I’d forgotten how briskly paced the second half is. With commercials, channel flipping and other interruptions drawing things out, the whole movie seems much longer when I've watched it at home, but without all that, it moves surprisingly fast, especially following the attack by the Tyrannosaurus Rex that serves as the centerpiece of the film.


Everything before that sequence is a long, slow build, creating tension and drawing it as tight as possible before the dinosaurs finally bust out. My favorite parts of the film have always come in that first half: the initial mystery (for the characters, at least) about what the park is, Alan Grant’s reaction to seeing living dinosaurs for the first time, the ethical debate over what park impresario John Hammond has created. Yet watching it again, free of interruptions, I was surprised at how quickly (and effectively) Spielberg moves things along in the second half, the way he packs almost all of the action and suspenseful moments into that portion of the film, yet pacing it in such a way that it doesn’t become exhausting. It remains thrilling, all the way through to the “Deus Rex Machina” ending. It’s an interesting structural decision I’d never really noticed before (compare it to Jaws, the Spielberg film most closely related to this one (well, other than The Lost World), in which the tension/suspense rises and falls throughout the film, even well into the final act).

The other draw to revisiting this movie (and really any movie) in a theater is simply to once more enjoy it in its intended setting. Small as our screen was (and big as our home TV is), it was still an immersive experience compared to watching it at home, and it was a blast to hear things like the roar of the Tyrannosaurus and the now-iconic John Williams score in crisp surround sound. Even the quieter moments gained something on the big screen. This time around, for example, I was struck at just how well Sam Neill nailed that moment when Grant sees living dinosaurs for the first time, the look of complete shock, wonder and amazement on his face, the way his body just crumples, like he physically can’t handle what’s he seeing (it’s even more impressive when you consider Neill was most likely reacting to nothing, the actual effects work that created the dinosaurs coming later). As much as I've always liked that scene, I’ve never been quite as affected by it as I was watching it again on the big screen.

So even though this is a movie I've seen, in part or in whole, at least a half dozen times (if not more), and I was thus just expecting to revisit some familiar moments on a larger screen with better sound, I nevertheless took something new away from this additional viewing (in addition to enjoying the more simple pleasures of once again watching dinosaurs go nuts on the big screen), making the 3D release worthwhile. Even if I had to watch it through a pair of plastic glasses.