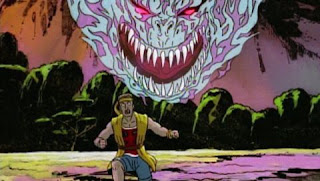 "Whatever It Takes"
Original Airdate
November 6th, 1993
Producer: Larry Houston
Story: Steven Melching
Storyboard Artist: Larry Houston
Story Editor Developer: Eric Lewald
Writer: Julia Jane Lewald
Plot
Playing with his friends in the shadow of Mount Kilimanjaro, the young mutant M'jnari spots a seeming tear in the air his friends can't see; the Shadow King emerges from it, and possesses the boy. At the X-Mansion, Jean Grey, while using Cerebro to search for Professor X, detects the Shadow King's emergence, which Beast attributes to a rift in the Astral Plane. Realizing the rift is near her former village, Storm sets out for Africa with Rogue. Meanwhile, Wolverine tracks Morph to a bar in South America. Later, Storm & Rogue arrive in Africa and confront the Shadow King-possessed M'jnari, who agrees to give up the boy to take control of Storm. She agrees. In South America, Wolverine and Morph fight, with Wolverine trying to convince Morph to come home. Morph refuses, saying he needs to figure things out on his own, and Wolverine eventually relents. Back in Africa, Storm is able to assert control long enough to fly into the upper atmosphere, driving the Shadow King from her body. With the tear in the Astral Plane closing, M'jnari races through, drawing the Shadow King with him. He then turns around, and manages to get through the opening, with a little help from Rogue, just before it closes, trapping the Shadow King once more. Meanwhile, Magneto & Xavier emerge from the avalanche to find themselves in a tropical jungle which Magneto recognizes as the Savage Land. Powerless, they are attacked by natives riding on Pteranodons, and end up diving into a river, with the current carrying them over a waterfall.
What to read the rest before everyone else? Become a patron via Patreon!
Become a Patron!
Newer Post Older Post Home
Posted by Austin Gorton at 12:00 PM