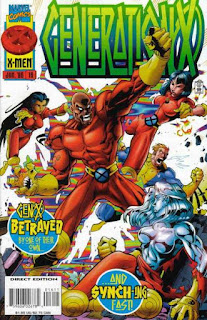 Plot
Banshee & Emma are flying to Jubilee, Paige, and Monet's aid when Emma abruptly halts Banshee's flight. She tells him if they get any close, Synch can copy their powers, making him even harder to beat; the girls are on their own. In Synch's old high school, he turns Jubilee's power on his classmates, but Paige takes the brunt of the attack as Jubilee urges him to fight Emplate's influence. Torn, he runs off. Back in Massachusetts, Skin decides to take a worsening Chamber to see Professor X. In St. Louis, Synch contemplates killing himself to save his friends, but Paige tracks him down and talks him out of it. He attacks her, causing her to shed her skin before she is ready and trapping her in a mixed form, but she manages to knock him down before collapsing from the pain. Just then, Monet confronts Synch and allows him to fully tap into her aura. When he does, he learns the truth about her, which purges him of Emplate's influence. Meanwhile, Skin & Chamber are on the road when they're attacked by the X-Cutioner, who is targeting Skin for murder.

Firsts and Other Notables
Synch is freed of Emplate's influence by the end of this issue, after Monet confronts him and allows him to try to synch to her aura (she says that Emplate is unable to feed on her, making her more or less immune to the danger posed by the possessed Synch); when he does, he learns her big secret that's been teased consistently throughout the series (which will turn out to be that she's actually two kids in a Monet-shaped trench coat), which snaps him back to normal. 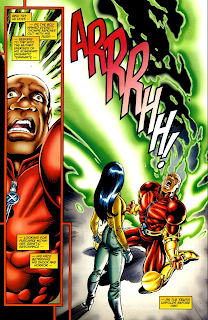 With Chamber's powers and general health continuing to spiral out of control following his encounter with Onslaught and their teachers away, Skin prepares to take him to see Professor X 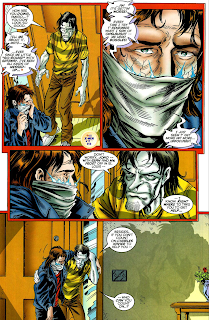 On the way, they are attacked by the X-Cutioner, who is targeting Skin for murdering someone with the same name as Skin (this is all part of the Skin subplot that was last teased in issue #12 and will move into the foreground next issue). 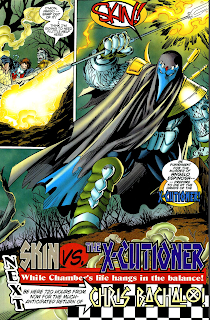 Just before they leave, someone arrives at the school in response to a job application; this is the first appearance of Chevy, who will eventually become the school's janitor and remain so minor a character that I forgot he existed and doesn't even get his appearances linked together on the Marvel Wikia. 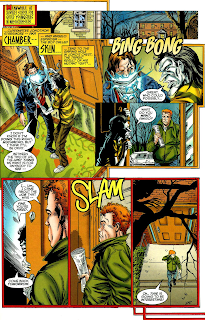 Creator Central
Joe Madureira provides the (not terribly great) cover to this issue.

A Work in Progress
Jubilee considers Synch to be her only classmate who puts up with her unconditionally.

She also takes control of the fight with Synch from a strategic perspective, holding herself and Monet back in order to stop Synch's access to their powers and sending Paige after him because she says his aura has a hard time synching to her power (suggesting his power has some limitations when it comes to copying more physical powers). 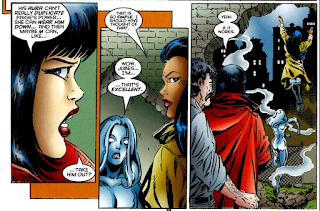 It's said here that Husk's ability requires extreme concentration, and if she "husks" abruptly, she runs the risk of getting stuck between two different forms, as happens here when Synch pulls off her skin before she's ready. 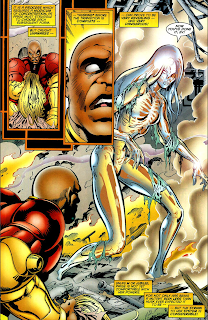 Austin's Analysis
This issue does one of those comic book things we haven't gotten a lot of in this series, reveal details about characters' powers in the course of big superpowered fights (of course, this is largely because this series doesn't really do a lot of big superpowered fights), as more info about how both Synch and Husk's relatively unique powers work is revealed in the course of their fights together. That aside, it's a fairly straightforward conclusion to the "evil Synch" arc, but while it's well-crafted enough, it's still something of a shame that Synch's first outing in the spotlight has him acting out-of-character for most of the story. Lobdell & Dezago put in the work of illustrating Synch's character via his struggle with the darker urges he was given by Emplate, but at the end of the day, stuff like Jubilee's head for strategy or Paige's determination stand out much more than anything Synch does, relegating him to second tier status even in the story where he's the ostensible star.

Next Issue
Tomorrow, Excalibur strikes back in Excalibur #98. Friday, Cable & Domino grieve (in their unique way) in Cable #32. Next week, action figures!