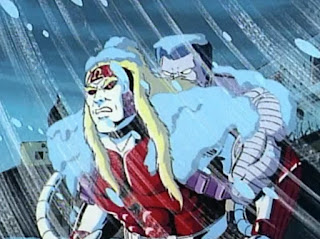 Original Airdate
November 13, 1993
Producer: Larry Houston
Story: Steven Melching
Storyboard Artist: Larry Houston
Story Editor Developer: Eric Lewald
Writers: Francis Moss & Ted Pedersen
Plot
Xavier & Magneto survive their plunge over the falls, but upon climbing out of the water, are attacked by a massive dinosaur. Magneto manages to lure it towards a geyser, which explodes, scaring it off. Meanwhile, in Russia, a group of former Soviets, aided by the mutant Darkstar, revive Omega Red. In New York, Jubilee is attacked by a group of Friends of Humanity thugs, but is saved by Colossus, who is looking for the X-Men's help to liberate his homeland from Omega Red. Leaving a note, Jubilee goes with Colossus to Russian, where they find his home destroyed and his parents captive, but his sister alive. Meanwhile, Wolverine sees Jubilee's note and flies to Russia, knowing Omega Red as an old enemy. When Jubilee & Colossus try to liberate Colossus' parents, Omega Red attacks them. Just then, Wolverine arrives and manages to fight him off. They are soon joined by Rogue, Storm and Gambit. Colossus rallies a small army of people against Omega Red and the Soviet forces, and they are joined by Darkstar, who defects to their side in the face of Omega Red's cruelty. She suggests Storm use her powers to plunge Omega Red back into the deep freeze he was previously held in, ending his threat for the time being. Colossus is offered a place with the X-Men but declines, preferring to stay in Russia and help rebuild his family's farm.
What to read the rest before everyone else? Become a patron via Patreon!
Become a Patron!
Newer Post Older Post Home
Posted by Austin Gorton at 12:00 PM