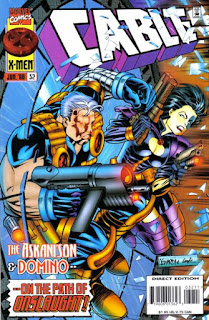 Cable & Domino return to Camp Hayden, former site of the Nimrod project. They are hoping to find information about Onslaught, who recently wiped out the contents of the facility. As they infiltrate the facility, Domino pushes Cable to open up about the recent death of his son, Tyler, while also noticing that he is having trouble controlling his techno-organic infection. The pair are being unknowingly watched by Onslaught's herald, Post, who has a past with Cable. As Cable & Domino penetrate deeper into the facility in search of the memory chips from the security cameras which might have captured an image of Onslaught, bits of the abandoned Nimrod project come to life and attack them. While fighting it off, they locate the memory chips, but discover they've been magnetized, wiping out any info they might have contained. His frustration mixing with his grief for Tyler, Cable lashes out, destroying the last bits of Nimrod. Meanwhile, Blaquesmith is studying the changes in Cable's techno-organic infection when someone enters his base, declaring he has studied Cable too and knows he can't face the challenges ahead without Blaquesmith. Then the base explodes.

The funeral of Cable's son Tyler, who as the super-villain Genesis was killed by Wolverine in Wolverine #100 following a failed attempt to restore Wolverine's adamantium skeleton because Tyler is a moron, occurs off-panel just before this issue starts (with Cable & Domino proceeding directly from the funeral at the Guthrie farm to Camp Hayden, Cannonball having offered Cable a spot on the farm to bury his son). Tyler not getting an on-panel funeral isn't great for Cable as a character (more on that below), but seems very fitting for Tyler.

Domino, meanwhile, is prodding Cable to grieve while at the same time grappling with her own complicated emotions revolving around the fact that Cable's son more or less forced her to kill Grizzly in issue #24.

Camp Hayden is the site of the Nimrod project X-Force seemingly shutdown in X-Force #35-36 and which Domino recently led Siryn & Meltdown to investigate in X-Force #52 (which is when the whole "it's empty but for the word 'Onslaught' written on the wall" thing occurred. Cable & Domino are back because Cable hopes to retrieve security camera footage, essentially, in order to at least learn what Onslaught looks like, but they find the security disks have been magnetized, rendering them useless and also offering a clue of sorts to one of the later Onslaught reveals (that there's a little bit of Magneto in him, giving him access to magnetic abilities as well as psionic ones). 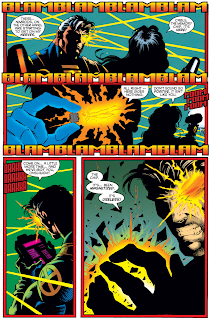 In more Onslaught tie-ins, Post turns up in this issue, though he only watches Cable & Domino and doesn't interact with them directly, saving that for next issue. His past with Cable is referenced again (obliquely, of course). 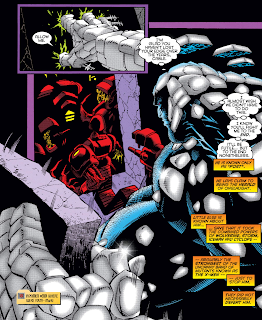 It's not entirely clear here, but Post does blow up Blaquesmith's abandoned ship base at the end of the issue, an attempt to stop Cable from receiving Blaquesmith's help in the future (Blaquesmith, not surprisingly, survives, as we'll learn next issue). 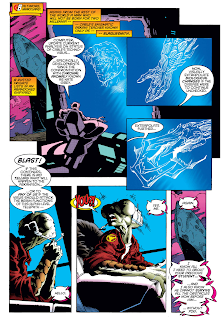 Cable continues to struggle to keep his techno-organic virus in check following his encounter with Nate Grey, something Domino has started to notice thanks to the periodic spike-like shards that extend from Cable's "metal" arm, which will serve as the visual shorthand for "Cable is losing control of the virus!" going forward. 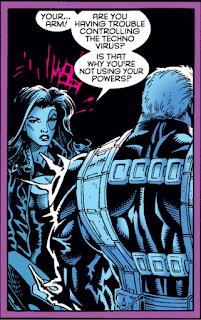 Much like issue #29, which was essentially an issue setting up a conflict to unfold in a subsequent one, this issue isn't so much about Cable fighting Post as it is letting us know that he'll be fighting Post next issue. As a result, it's another disappointing outing, as all the plot and action beats here feel like a rehash or an exercise in narrative water treading (even the Camp Hayden setting is a rerun, with Cable and the narration pointing out X-Force was just there). The more interesting material comes with the lackluster action set pieces serving as a backdrop for Cable & Domino trying to grieve and come to terms with the recent deaths of Tyler and Grizzly (and the complicated comic book-y way those two deaths are connected). This material is certainly stronger than all the Post setup stuff, and it's shame it couldn't have been the entire focus of the issue: Tyler is, even after his recent machinations involving Wolverine, a Nothingburger of a character, but he's still important to Cable (and through his manipulation of Grizzly, of import to Domino) so having his funeral occur off-panel is a curious decision. It's the kind of thing some of this issue's pages would have been better served depicting, instead of Cable & Domino fighting some drones amidst promises of better battles to come.

Next week, X-amining the "Age of Apocalypse" and X-Men 2099 action figures!