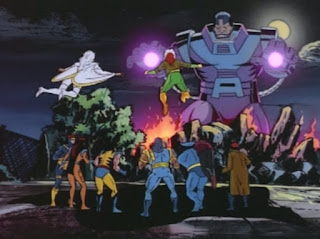 "Time Fugitives Part 1"
Original Airdate
December 11, 1993
Producer: Larry Houston
Story: Steven Melching
Storyboard Artist: Larry Houston
Story Editor Developer: Eric Lewald
Writer: Michael Edens
Plot
In the year 3999 AD, Cable is fighting Apocalypse when a temporal storm begins erasing the timeline. Cable consults with this A.I., which tells him how Bishop, upon arriving back in his native timeline following his successful efforts to stop Senator Kelly's assassination, learned that instead a plague targeting mutants was released, leading to mutantkind still being wiped out. Bishop then proceeded to go back in time again, to stop the plague from spreading. Meanwhile, an agent of the Friends of Humanity spots Jubilee at the mall and infects a shopkeeper there with the virus, telling a gathering crowd that Jubilee - a mutant - infected him. She is rescued by Storm and Beast gives her a clean bill of health, but he investigates the virus further. Elsewhere, an attempt to quarantine some mutants in the city leads to a riot, attracting the attention of Bishop and the X-Men, reuniting them. Learning the ultimate fate of the virus from Bishop. Beast then testifies before the senate, during which Graydon Creed heckles him and ends up infecting himself with the plague. The X-Men track Creed to the base of Friends of Humanity, where the scientist who engineered the virus is revealed to be Apocalypse. Bishop manages to destroy the vials containing the virus, but an enraged Apocalypse kills the X-Men. In 3999, Cable watches all this, then learns that without the antibodies formed to combat the mutant plague, it eventually leads to more mutant deaths and the eradication of Cable's timeline. Cable is horrified as he realizes that in order to save his world, he has to help Apocalypse destroy a past one...
What to read the rest before everyone else? Become a patron via Patreon!
Become a Patron!
Newer Post Older Post Home
Posted by Austin Gorton at 12:00 PM