Firsts and Other Notables
This episode introduces Ahoska Tano, Anakin Skywalker's one-time apprentice, former Jedi, and the ostensible star of The Clone Wars animated series (certainly of its final season), to live-action Star Wars (following in the footsteps of fellow animated-to-live-action export Bo-Katan). She is played by Rosario Dawson (whom I mostly know from Clerks II and the Rent movie, but I've seen her in plenty of other things).

While Ahsoka was last seen in that final Clone Wars season, chronologically, the last story she appeared in prior to this was in the final episode of Rebels, in which she and Sabine Wren went off to try and find Ezra Bridger (who was lost somewhere in the Unknown Regions). However, while Rebels takes place well before this series, Dave Filoni, showrunner of that series and director of this episode, has suggested those closing minutes of the final Rebels episode may not take place at the same as the rest, implying that Ahsoka's appearance here may lead into her journey with Sabine.
Which would fit given that we learn this episode that Ahsoka is looking for Grand Admiral Thrawn, the fan-favorite villain introduced in the first modern Expanded Universe novel, Heir to the Empire, and re-canonized via appearances in Rebels and a series of books. Ezra's disappearance was tied to his efforts to foil Thrawn's plans in Rebels, thereby connecting Thrawn to the search for Ezra. It nothing else, obviously, the mention here is presumably setting up a live-action appearance for the character someday.
The child gets a name this episode! Thanks to Ahsoka's shared affinity for the Force, the two are able to communicate on some level, allowing Ahsoka to learn his name is Grogu and that he was training at the Jedi Temple prior to the fall of the Republic and the rise of the Empire, but that he's instinctively suppressed his Force abilities for survival. This suggests Grogu is NOT a clone of Yoda but merely a member of his species, and the interest of the Kaminoan-esque Dr. Pershing in the child is due more to Pershing's larger cloning efforts (as revealed last episode) and need for someone with midichlorians than to the child being a clone himself (but, of course, we don't know that for certain).
Casting Call
Lang, Magistrate Elsbeth's second-in-command/hired gun, was played by Michael Biehn, who was Kyle Reese in The Terminator, Corporal Hicks in Aliens, and the Navy SEAL who goes crazy from the pressure in The Abyss (he also appeared in Navy SEALs, Tombstone, and The Rock, a real 80s/90s action/sci-fi Renaissance man).

The Magistrate is played by Diana Lee Inosanto, an accomplished actor & stunt performer, and the goddaughter of Bruce Lee.

A Work in Progress
The Mandalorian refers to Ahsoka's lightsabers as "laser swords", the term (somewhat infamously) used by George Lucas for the weapon.
This is a super-nerdy thing to appreciate (even by my standards), but when Ahsoka loses one of her sabers during the fight with the Magistrate, she switches to a reverse grip; this was Ahsoka's preferred and somewhat-signature grip throughout The Clone Wars, and she switched to it right around the time I started thinking "gee, I wish she was using her reverse grip in this fight".

The planet Tython, where Ahsoka sends the Mandalorian, was a relatively big deal in the old Legends continuity: it was considered the birthplace of the Jedi, appeared in the Dawn of the Jedi comics, and was also the starting point for certain characters in the Old Republic video game. Canonically, at this point, it is considered to be the possible home of the first Jedi Temple.
Curiously, the fate of the magistrate remains unknown - Ahsoka asks her about Thrawn, and then we cut to the townsperson being named the new leader and Ahsoka giving the beskar staff to the Mandalorian.
Did You See?
Midway through the episode, as the Mandaloria searches for Ahsoka, an owl-like convor, presumably Morai, a spiritual guide of sorts to Ahsoka, appears. A Loth-cat, a species which appeared both in Rebels and earlier in this series, can be seen in the city towards the end of the episode as well. 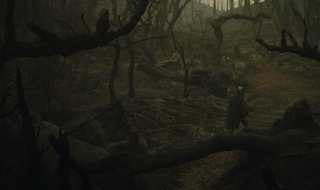 Did You Hear?
If you listen closely, "Yoda's Theme" from Empire Strikes Back is incorporated into the music by Ludwig Göransson briefly when Ahsoka mentions his name. Ahsoka's theme from The Clone Wars appears a few times as well.

Austin's Analysis
Well, that was easily the most Star Wars-iest episode of the series yet, just by dint of the presence of an actual Jedi and lightsabers and talk of the Force and the Jedi Temple and all that stuff. Yet for all that (and for as much as fans of the wider ranging Star Wars universe like myself may have thrilled at the return and live-action introduction of fan-favorite Ahsoka Tano), as with the third episode of this season, those elements didn't overwhelm, thanks to the fact that the Mandalorian - and specifically his relationship with the child, Grogu - remained the driving focus of the episode. It also helped the show feel like itself despite the deep dive into the wider Star Wars universe that the plot was based on another classic Western story trope, that of the gunslinging hero rolling into town and helping liberate it of a corrupt official.
It will be interesting to see how the events of this episode will affect the arc of the season/series - the meeting with Ahsoka could easily have been held for the finale, with the "go find another Jedi" quest setup for the series' third season, but it wasn't, which presumably means something. In terms of Ahsoka's characterization, her refusal to train Grogu due to his attachment to the Mandalorian also felt a little forced/out-of-character (Ahsoka in general has shown, elsewhere, a much more nuanced understanding of the relationship between Jedi and attachments than most) suggesting, perhaps, the reasoning for her refusal was a cover (or, of course, just a thinly-veiled attempt to sidestep disrupting the beloved Mandalorian/Grogu pairing driving the show) or setup for a larger role for the character in the series (it seems unlikely the character was cast for one appearance and, similar to Bo-Katan in the episode before last, will likely appear again). If that is the case, at the very least, this episode serves to build further confidence that even as The Mandalorian takes more steps into the larger world of Star Wars, it can do so without leaving behind the distinctive elements that make the show what it is.
Like what you read? Then support us on Patreon &amp; gain access to exclusive reviews of X-Men: The Animated Series and more!