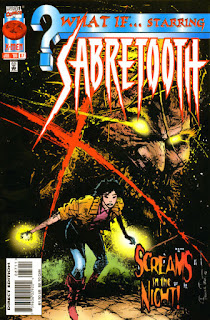 This review comes courtesy of Patreon supporter Michael Langenmayr. After supporting the site at the "Extraordinary" level or higher for twelve months, he chose this issue for review. To get the chance to pick your own issue for review, and support the site, become a Patron here.
"Cat and Mouse"
July 1996

In a Nutshell
Jubilee must survive against an escaped Sabretooth

Plot: Dan Abnett/Andy Lanning
Script: Dan Abnett
Pencils/Inks: Frank Teran
Inkers: Dan Green & Tim Townsend
Letters: Steve Dutro
Colors: Christie Scheele
Editor: Kelly Corvese
Editor-in-Chief: Bob Harras
Plot
In the tunnels beneath the X-Mansion, Jubilee discovers that Bishop has been killed by Sabretooth, who escaped his cell when Beast accidentally overloaded the mansion's power core. She runs back to the mansion, past the unconscious forms of Iceman and Emma Frost, only to find Sabretooth attacking Beast. He manages to fight Sabretooth off long enough to tell Jubilee to reboot the power core. Jubilee succeeds in doing this as Sabretooth finishes off Beast. She then blasts him with fireworks, allowing her to run elsewhere into the mansion. Drawing Sabretooth into the Danger Room, she attacks him with simulacrums of Hellfire mercenaries and Brood drones, then lures him into piercing one of the mansion's power conduits, frying him with dangerous amounts of energy, before managing to engage the room's laser grid defenses to keep him safely locked away.

Firsts and Other Notables
At this point in its run, What If? has abandoned the technique of plastering each issue's cover with its high-concept setup (ie "What If Phoenix Had Lived?") and instead is spotlighting the character the ostensible "what if?" scenario is meant to highlight (though in this case, the story is really about Jubilee, not Sabretooth, but I imagine Sabretooth was considered a bigger commercial draw). 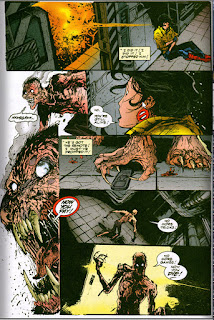 If we were to give this issue the more traditional What If? cover treatment, it would probably be something like "What If Sabretooth Killed Bishop That One Time He Escaped in Uncanny X-Men #311?" with the answer being "Sabretooth would also kill Beast and thoroughly terrify Jubilee before she managed to lock him back up in the Danger Room." 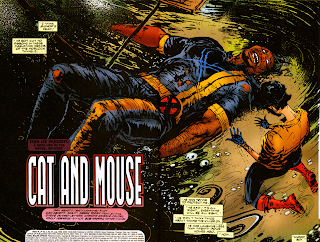 Creator Central
The writing team on this one is Dan Abnet & Andy Lanning, who will in the future make a name for themselves as the architects of Marvel's 00s-era resurgence of "cosmic" books, including the iteration of the Guardians of the Galaxy that would serve as the direct inspiration for the MCU Guardians.
Pencils come from Frank Teran, a name I'm not familiar with, but his work here is quite enjoyable, Sienkiewiczian in places and wholly appropriate to the horror movie vibe of the story.
Through the Looking Glass
This issue features Jubilee racing down a massive spiral staircase to get to the Danger Room that I don't think has ever appeared in the mansions before or since. 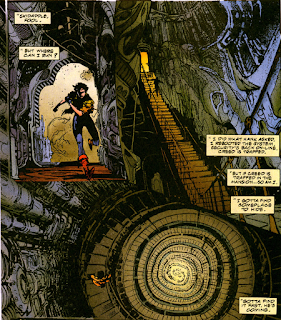 Austin's Analysis
The "everybody dies" ending to What If? stories is so common as to be cliché, but thanks to the series' jettisoning the need to have a big, attention-getting high concept "what if?" interrogative slapped on the cover, this issue is allowed to cover the usual "everybody dies!" beats a little differently. Here, it's less "everybody dies!" and more "Bishop & Beast die!", and while that smaller scale of stakes maybe isn't as eye-catching at first glance, it does allow for a more intimate story, one that's less about big, sweeping, alternate events and more about character. This issue is, essentially, a character study of Jubilee, showing her response to the monstrous deaths of two of her teammates and her efforts to survive a wild Sabretooth loose in the mansion (and recapture him). As such, it's much compelling than a lot of the series' bigger, more sweeping explorations of alternate scenarios.
It also allows Jubilee - in many ways, the Kitty Pryde of the 90s - to have her own "Demon" moment; just as Kitty experienced a trial by fire surviving - and defeating - a N'Garai demon on Christmas Eve in Uncanny X-Men #143, here Jubilee (still, as of the point in time when the story diverges, the youngest member of the X-Men, having not left to join Generation X yet) experiences something similar, fighting back against a monstrous foe intent on destroying her, using cunning, training, and steadfast resolve (and a healthy dose of proprietary X-Men tech) to succeed. What If? stories generally don't tend to have a lot of sticking power - some of the bigger swings in terms of crafting an alternate world can be memorable, but for the most part, they're largely disposable & rarely invite return readings after the final page is turned - but by using the "what if?" approach to tweak just one small detail, and then chronicling how just one specific character reacts to that small change, the result is something far more engaging & rewarding than the usual What If? fare.

Next Issue
"Unstacking the Deck" takes a look at the 1996 Fleer Ultra Wolverine set!