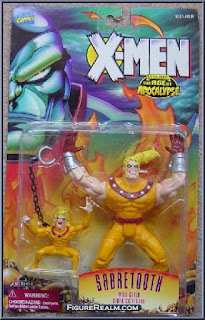 Years of Release
1995-1996
Roll Call
Age of Apocalypse: Apocalypse, Magneto, Weapon X, Cyclops, Sabretooth
X-Men 2099 Series I: Bloodhawk, Brimstone Love, Meanstreak, Metalhead, Skullfire
X-Men 2099 Series II: Breakdown, Halloween Jack, Junkpile, La Lunatica, Shadowdancer
Firsts and Other Notables
Embracing the "themed" approach that inspired the earlier Phoenix Saga, Mutant Genesis, and Invasion lines, "Age of Apocalypse", not surprisingly (given the storyline's popularity) receives its own line of action figures, spotlighting arguably the most popular (non-female) characters from the storyline (or at least the ones with a significant impact on the narrative), with Sabretooth's turn in the story as a gruff killer with a heart of gold essentially letting Toy Biz populate it with two Wolverines.
Released in 1996, these figures are a bit bulkier and more top heavy (with broader shoulders) and feature more limited articulation than earlier waves of X-Men action figures, a design aesthetic the series would embrace as it moves into the late 90s.
An AoA Gambit figure was announced (and included in cardback art) but wasn't released until 1997, as part of a "Marvel's Greatest Couples" set, alongside a "Age of Apocalypse" Rogue figure.
Sabretooth comes packaged with a smaller Wild Child figure, to recreate their "Age of Apocalypse" dynamic, while Apocalypse comes with the AoA Shadow King (who is just goo in a jar) and Cyclops comes with one of the telepathic brains that kept the Pens docile. 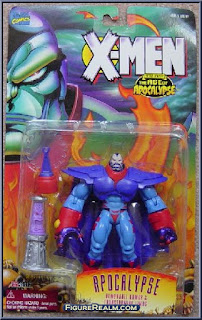 Both lines feature specific cardback art on the fronts and backs. 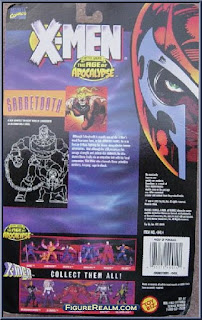 The X-Men 2099 figures represent an eclectic mix of characters from that series; while the first wave features relative mainstays like Skullfire, Metalhead, and Meanstreak (as well as Bloodhawk, whose appearances are much more intermittent) and arguably the series most consistent straight villain in Brimstone Love, the second wave is much more hit-or-miss: La Lunatica is an understandable inclusion (though like the main X-Men, the female characters suffer from skewed understandings of how kids buy toys, with neither Cerebra nor Krystallin, both of whom arguably warrant figures well ahead of, say, the one-off Breakdown left out), as is Junkpile (who straddles that villain/ally line throughout the series). But Breakdown seems like little more than filler, while Shadow Dancer (a non-verbal one-off character) seems like he was included just so the wave could have a big, bulky, vaguely-villainous looking figure in the mix. 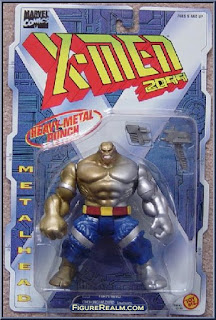 Halloween Jack is notable for being the one X-Men 2099 character to appear in a present day X-book (during his creator's John Francis Moore's run on X-Force) (he also has far more articulation points than the average figure, an attempt to replicate the character's more agile/extreme mannerisms, making him more a peer of the later hyper-articulated Marvel Legends figures than his more clunky and limited forebears). 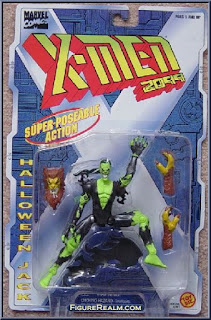 For more on X-Men 2099, you can check out my reviews of every issue of the series over on our Patreon page.
Thanks to FigureRealm.com for the images!

Of Their Time
Obviously, both of these lines are inspired by very specific stories/series from specific years; X-Men 2099 ran for over three years, but it's existence (and that of the entire 2099 imprint) is tied to that early 90s boom time (and the immediate aftermath of its bust, when Marvel was still trying to milk every last dollar they could out of it), when the market could support something like an imprint of a half dozen titles all set in the future, inspired by but narratively-separate from existing characters.

Favorite Figures
The only one of the 2099 figures I owned was Skullfire, but it turned out to legit be one of my favorite figures of the entire X-Men line. Something about the design and proportions of the figure seemed "just right", along with an action feature (the see-through/glowing hands) that was cool without being intrusive. 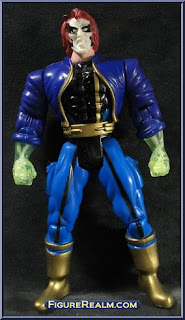 As for the "Age of Apocalypse" figures, I needed another Wolverine figure like I needed a hole in my head, but I did really like the way you could snap claws onto his stump to recreate the big reveal that while his hand may be gone, the claws that came out of it aren't. 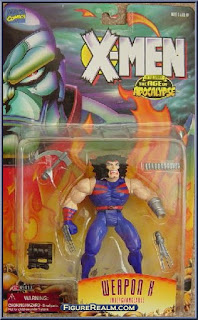 The Apocalypse figure always seemed cool to me, too, but alas, I was never able to find one to purchase for myself.
Austin's Analysis
These two lines of action figures are representative of where the X-Men figures on the whole were by 1996, stuck between two worlds: the more traditional (and kid-focused) action figures of the past, with limited articulation, basic sculpts, and more overt action features, and the more collector-driven, highly articulated, faithful-to-the-source material figures that McFarlane Toys was already putting out. These figures aren't entirely void of action features, nor are most of the sculpts especially dynamic, but they're also, generally, bigger figures, more suited to being displayed on a shelf than held in the hands of playing children. And while "Age of Apocalypse" was certainly an extremely popular storyline, a line of X-Men 2099 toys seems very niche, and very much a case of a line trying to juice an orange for all its worth. Toy Biz has a few more lines of figures, curated along specific groupings like this, to come, but from this point forward, the vast majority of "new" X-Men figures would consistent of older figures being repainted & repackaged.
At the time these figures came out, I found myself in a similar position - aging out of the "plays with toys" demographic (I was, honestly, probably well out of that demographic already, and only hanging around in it because I had a younger brother) but lacking still the disposal income to collect action figures for the sake of collecting action figures (at least, non-Star Wars action figures, which I was collecting still, with the vast bulk of my limited disposable income going to the comics themselves). As a result, these are the last lines of X-Men figures I bought figures from with any regularity, and even then, my purchases were few and far between, picking up only a couple of the AoA figures and one of the 2099 figures (despite reading and largely enjoying that series). There are a few one-off figures from later lines I bought after this, ones acquired at conventions or deeply discounted at a Kay-Bee store (back when those were still around), including a few figures from the later "Onslaught" line. But at this point, I was mostly done with collecting X-Men figures, and while I continued to keep up with the various Star Wars collections, it wouldn't be until Marvel Legends, figures geared towards the collectors' market at a time when I had more disposable income, that I would return to collecting superhero action figures on the regular.
As such, this will be my last "X-amining X-Men Action Figures" post; I will likely look at the "Onslaught" line in some capacity, but more in its capacity as tie-in to the storyline than as the continuation of a line of action figures. But from this point forward, my forays into X-Men action figure collecting are much more sporadic, and less rooted in a specific time as a reader/collector which helped inform these retrospectives. That was a time when my fandom (and my age) was still young, and things like X-Men action figures (and trading cards) were vehicles to expand my knowledge of and investment in the characters (especially with so much of the characters' histories locked away in expensive back issues), a way, even after I ostensibly stopped playing with the figures as toys, to make the characters feel more lived in and real, to keep me engaged with the narrative even when there were no new issues to read. The world of the early 90s, in comic book terms, was a wild, raucous time, and the X-Men action figures were, ultimately, a key piece in helping make those characters feel like some of the biggest & best characters in the world. It would be a lie to say that these figures, on the whole, weren't responsible for cementing that notion as a truism in my brain to this day, but like the busting comic book industry of the time, I eventually moved on and left the action figure side of things behind.
Next Week
What If? #87, featuring Sabretooth!
Like what you read? Then support us on Patreon & gain access to exclusive reviews of X-Men: The Animated Series and more!