"The Believer"
Original Airdate
December 11th, 2020
Plot
With Cara Dune's help, the Mandalorian retrieves Migs Mayfeld from a New Republic prison, pressing him into helping locate Moff Gideon. To do so, Mayfeld says he will need to access an internal Imperial terminal, with one nearby on the world of Morak. On Morak, Mayfeld and the Mandalorian commandeer an Imperial transport and, disguised as Shoretroopers, proceed to a rhydonium refinery. Along the way, the transport is attacked by pirates attempting to destroy the rhydonium, but the Mandalorian manages to fight them off until they reach the refinery, where they are greeted as heroes. Inside, Mayfeld & the Mandalorian head toward the officer's mess; Mayfeld spots the terminal, but his former superior officer, Hess, is inside, requiring the Mandalorian to access it instead. To do so, he must remove his helmet. He gets the location of Gideon's ship, but draws the attention of Hess, and Mayfeld is forced to intervene, which leads to Mayfeld and the Mandalorian getting a drink with Hess. When Hess notes Mayfeld's familiarity, Mayfeld reminds him of their service together, and how Hess ordered the execution of a number of Mayfeld's fellow soldiers as part of Operation: Cinder. Mayfeld then shoots Hess, and the refinery explodes in gunfire. With Cara Dune & Fennec Shand providing cover from a nearby ridge, Mayfeld and the Mandalorian head to the roof of the refinery, where Boba Fett retrieves them in Slave I. As they fly off, Mayfeld fires back at the refinery, hitting the rhydonium and triggering an explosion that destroys the entire facility. Impressed with his actions, Cara Dune allows him to go free, suggesting he was officially killed in the explosion. Later, Moff Gideon receives a message from the Mandalorian, who tells him that soon the child will be back with him.

Firsts and Other Notables
This episode features the return of Mayfeld, the former Imperial sharpshooter who served as the leader of the prison break in last season's "The Prisoner". He starts the episode breaking down scrap on a New Republic prison world, before being "let go" by Cara Dune at the end of the episode.

For the second "penultimate episode of the season" in a row, the Mandalorian is forced to remove his helmet, though he spends significantly more time without it here. 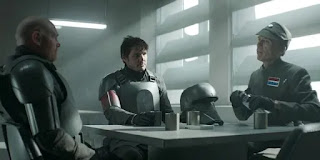 This is the first episode of the series to not feature an appearance from Baby Yoda in some capacity.
This episode is also the first time we've seen Slave I's rotation from landing to flying position from the perspective of a passenger outside the cockpit. 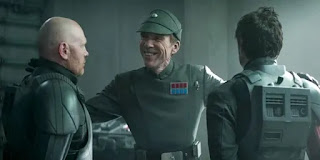 A Work in Progress
Boba Fett has spiffed up his armor since last episode.

When it's proposed that Boba Fett infiltrate the Imperial base on Morak, he dryly notes that they might recognize him, a reference to the fact that the first generation Stormtroopers all looked like him on account of also being clones of Jango Fett.
The armor the Mandalorian is forced to don to infiltrate the base is that of a Shoretrooper, a sub-category of Stormtrooper which debuted in Rogue One (meaning yes, the Empire, being highly specialized, has beach troopers).
Rhydonium, the volatile material being transported and refined in this episode, is a type of fuel (not unlike the similarly-unstable coaxium of Solo), and has been mentioned in The Clone Wars & Rebels (and was said to be harvested by the scavangers on Jakku in The Force Awakens).
Mayfeld says that the Mandalorian suffered hearing loss at Tanaab; the Battle of Tanaab is the action which prompted Lando's promotion to general just before Return of the Jedi, as mentioned in that film.
The Reference Section
When confronted by Hess, the Mandalorian says he has to work on TPS reports, a nod to Office Space.
Did You See?
The bomb Boba Fett used to take out the pursuing TIE fighters towards the end of the episode was the same kind of seismic charge his dad used while evading Obi-Wan in the asteroid field during Attack of the Clones.

What's the Deal With Operation: Cinder?
Introduced in the Shattered Empire comic book series and playing a role in the Star Wars: Battlefront II video game, Operation: Cinder was part of the Emperor's posthumous directives to the surviving elements of the Empire, ordering that in the wake of his death the Empire should be systematically and surgically burned down in order to make it harder for the Rebellion to govern and to allow certain elements of the Empire to escape to the Unknown Regions (where they would help form the First Order). This was carried out in part by satellite weapons which triggered climatic destruction on various worlds (including the Emperor's homeworld of Naboo) as well as by the more direct actions of Imperial forces Mayfeld and Hess discuss here.

Austin's Analysis
The rules behind narrative storytelling suggest that Mayfeld, upon being more or less pressganged into helping the Mandalorian and his crew, would inevitably cause problems in the ensuing adventure, even moreso when it's revealed the plan involves bringing the former Imperial deep into enemy territory, and then having much of the Mandalorian's support system stripped away bit by bit as the plan develops - he has to go in alone with Mayfeld, aboard a dangerous vessel, and even has to strip off his armor, culminating in the Mandalorian becoming as vulnerable as he's ever been as he's forced to interact with people sans helmet for an extended period of time. It's all about escalating tension (punctuated, a bit, by a fun action sequence in the middle in which the Mandalorian fights off a bunch of pirates from a rolling bomb) as we wait for the big (and inevitable) "Mayfeld is gonna screw this up" shoe to drop. But when it comes, it happens not because Mayfield betrays the Mandalorian out of revenge, or acts out of self-interest, but because he's overcome with genuine human emotion.
Confronted with the officer who caused the deaths of dozens of his fellow soldiers, an officer with no regrets about that act and still the titular believer in the Empire, Mayfeld gets revenge for his fallen peers. It's the expected wrinkle in the Mandalorian's plan, but it comes from a unexpected place, and is all the more entertaining for it. Because of this small bit of humanity, Mayfeld, who was (mostly by design) a fairly annoying antagonist in his first appearance, whose capture by the New Republic at the end of that episode was worthy of cheers, here becomes more of an actual character, someone to root for, welcome to make return appearances. While this episode on the whole serves to advance the larger plot and setup the season finale (with the Mandalorian's episode ending taunt a fun way to reverse expectations on the outnumbered and seemingly-overmatched protagonist heading into his presumed confrontation with Moff Gideon), it's impressive that it does by giving the de facto guest star something of a character arc amidst its more plot-focused machinations.