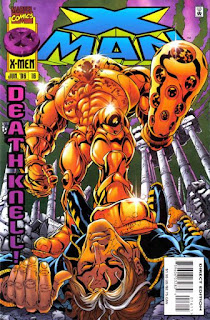 Plot
Holocaust attacks Nate, dropping the psychic shield Onsalught gave him in order to see the look of surprise on Nate's face when he reveals himself. Their fight threatens innocent bystanders, whose pain draws Threnody's attention. In Paris, Madelyne discovers Selene has returned. In Greece, Threnody tries to save whomever she can while Nate & Holocaust fight. Back in Paris, Selene outfits Madelyne in new risque attire, then sends her off to London to meet one of Selene's associates. In Greece, Holocaust tries to persuade Nate to join him; when he refuses, Holocaust taunts him with knowledge of Onslaught. When Threnody absorbs the dying energy of one of the bystanders, she attracts Holocaust's attention, who grabs her as a hostage, telling Nate to come with him willingly, or Threnody will die. Nate grudgingly agrees.

Firsts and Other Notables
Terry Kavanagh's long and ponderous run as the series' writer begins this issue, one which will last (barring a few fill-ins here and there) until issue #62 (when the series is swept up in Warren Ellis' larger "Counter X" revamping of the sub-tier X-books of the time). One of the more prolific editors-turned-writers at Marvel, Kavanagh is coming off a long run in the Spider-Man office (where he was one of the contributors to the infamous "Spider Clone" story), and stands today, for better and worse, as the definitive X-Man writer.
In a subplot that has now spanned three separate writers, Madelyne Pryor discovers a secret room inside Selene's Parisian manse filled with bodies, as well as a lounging Selene, who has returned from the events of X-Force #53-54 flush with power from supping on the Externals' life forces, and warning of a looming threat (presumably, as with so much around this time, Onslaught, but I'm not sure if that is ever made clear). 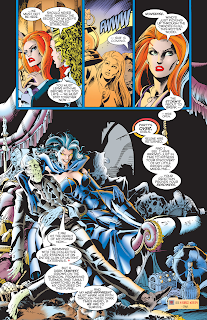 She later dresses Madelyne in Hellfire Club-esque attire and sends her off to London to meet an associate of Selene's; this will turn out to be Shaw, who inducts Madelyne into his own Hellfire Club Inner Circle. 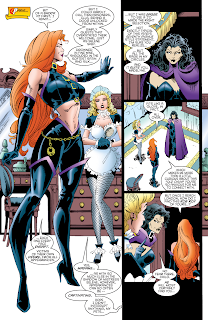 Creator Central
Val Semeiks, presumably dueling with Pascual Ferry for the role of "official fill-in artist of the X-line", pencils this issue.
A Work in Progress
Threnody absorbs a dying man's "death force", and is forced to admit she enjoys it a bit.

Austin's Analysis
You know what this series has been missing lately? Big protracted fight scenes involving the title character surrounded by colorful representations of assorted energies. And by "missing lately", I of course mean "missing one issue" (since that more less or less describes the bulk of the Cable/X-Man crossover). But, give Terry Kavanagh some credit (there will, after all, be plenty of time over the intervening forty odd issues to not): Nate in this issue is a vastly more enjoyable character to read about than in nearly any other prior post-"Age of Apocalypse" issue. Certainly, his sudden and fervent desire to prevent the deaths of innocent humans at Holocaust's hands more or less comes out of nowhere (and if we wanted to No-Prize an in-universe explanation, it could stem from his hatred of Holocaust in general - he just wants what Holocaust doesn't want, which is living humans - which, of course, brings his actions back around to being all about himself), but after months and months of him petulantly insisting no one has it worse than him, it is very refreshing to see Nate acting out typical heroic beats at this point, even typical, base level ones.

Next Issue
Next week: Onsalught makes his biggest play yet in X-Men (vol. 2) #53, X-Force storms the SHIELD helicarrier in X-Force #55, and Wolverine meets Elektra in Wolverine #102!