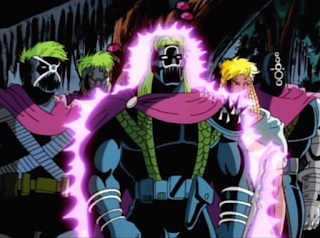 Original Airdate
December 4, 1993
Producer: Larry Houston
Story: Steven Melching
Storyboard Artist: Larry Houston
Story Editor Developer: Eric Lewald
Writer: Julianne Klemm
Plot
Cyclops is training in the Danger Room when Gambit, who is supposed to be monitoring the session, gets a phone call urging him to come home, leading Cyclops to be injured when a distracted Gambit disengages the safety settings accidentally. Rogue lays into him for his carelessness, but Gambit explains he has to go home, or else his brother may die. Gambit thinks back to when he was younger and responsible for delivering the Thieves Guild's tithe to the X-Ternal Candra, alongside their rival Assassins Guild's tithe. Returning to New Orleans, he discovers his brother has been captured by the Assassins, a trap laid by Bella Donna, whom Gambit once left at the altar. She agrees to let Gambit's brother go if Gambit honors their marriage, giving him a ring through which she can trigger pain in Gambit. As the X-Men arrive in New Orleans, Bella Donna reveals that she has exchanged the Thieves' latest tithe with a fake, so that Candra will destroy all of them. As the two guilds gather to deliver the latest tithes, Gambit breaks with Bella Donna, telling Candra the Thieves' tithe is a fake. With the X-Men's help, he and his family defeat the Assassins and expose Bella Donna's ruse to Candra, who strips Bella Donna of her powers as punishment. Gambit then leaves with the X-Men, telling Bella Donna and his family he's never coming back.
What to read the rest before everyone else? Become a patron via Patreon!
Become a Patron!
Newer Post Older Post Home
Posted by Austin Gorton at 12:00 PM