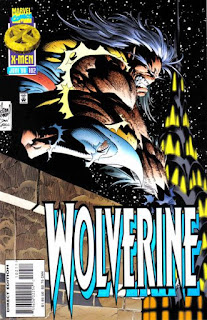 Plot
Wolverine, still in a devolved, animalistic state, steals out of the X-Mansion and heads into the city atop a commuter train. In the city, a teen boy sneaks out of his apartment to meet a friend; his mother gives money to a beggar, then bumps into Wolverine. His appearance startles her, but she gives him money regardless, thinking him a beggar. The boy and his friend rob a drug dealer, but the friend shoots a young couple who witness the encounter. Drawn by the shots, Wolverine kills the friend and chases after the boy. He fires a few shots at Wolverine, wounding him, before falling onto the tracks of an approaching train. Wolverine draws nearer and smells the boy's mother on him; remembering her kindness, he pulls the boy off the tracks, then collapses from the gunshot wounds. Just then, the drug dealer catches up to them, but Elektra steps in, stabbing the drug dealer and saving Wolverine & the boy. Wolverine gives the boy back his mother's money, and sends him home.

Firsts and Other Notables
This is the final issue of Adam Kubert's run, which began back in issue #75 (and includes the four issue "Age of Apocalypse"-set Weapon X); he will go on to pencil the two "Onslaught" bookend issues, and then become the regular penciller on Incredible Hulk for while.
After appearing briefly in issue #100 and behind the scenes last issue, this marks the formal introduction of Elektra into the series, with her serving as a supporting character for the next half dozen or so issues as she helps Wolverine regain his humanity (which will, in turn, lead to a solo Elektra series). 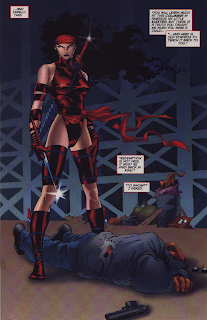 This is a quasi-silent issue, though unlike Larry Hama's previous forays into the style, while it lacks any dialogue, it does feature narrative captions, featuring Elektra narrating a story from her past, with the events meant, in places, to parallel Wolverine's story unfolding via the art. 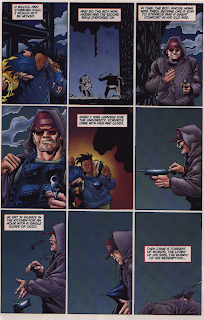 Elektra's story involves her as a little girl working with a gardener named Stavros on her father's estate. Stavros teaches her that all lives have value. Later, Elektra hears two other servants discussing Stavros past as a freedom fighter, how Nazi's murdered his family and turned him into a killer. Confused by this revelation, she seeks out Stavros but discovers he's been captured by two assassins targeting Elektra's father Stavros kills one, but Elektra entreats him to spare the other, reminding him that all lives have value.
This story will later be depicted in Elektra #18, while it will be revealed in Wolverine #106 that Wolverine encountered Stavros in World War II and taught him how to kill.

Austin's Analysis
For Adam Kubert's final issue on the series, Larry Hama tasks him with something between a tone poem and a fable, trusting him entirely to tell the present day Wolverine narrative while Hama tells Elektra's tale through the narrative captions. Kubert handles the task with apparent aplomb, and, for an artist who depicted both the bone claw reveal and Wolverine's more recent mental regression, he gets to leave the series on something of an atypical high note. But for all that, the juxtaposition between the story being told by the visual art and the one being told via the words in the captions, is far more effective as an introduction to the series of Elektra than in saying anything significant about Wolverine, despite coming at a time when his current condition is still novel and, two full issues removed from its inception, still largely unexplored. There's just something inherently silly in dropping Wolverine, at this point time, noseless, his claws ragged, still wearing the tattered shards of his colorful superhero costume, into the sort of "New York minute" urban tale presented here. It does neither the issue nor the character any favors, even as Adam Kubert gives the presentation his all, and Hama earns credit for doing something a little different.