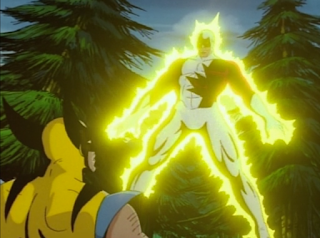 Original Airdate
November 20th, 1993
Producer: Larry Houston
Story: Steven Melching
Storyboard Artist: Larry Houston
Story Editor Developer: Eric Lewald
Writer: Len Wein
Plot
Arriving in Canada in response to a call from Heather Hudson, Wolverine is attacked by his old friend Vindicator and Alpha Flight, but Wolverine manages to hide in the trees to escape. Overhearing Vindicator say they need to bring him to a lab, Wolverine thinks back to when he received his adamantium skeleton. In the present, Jean Grey continues to search for Professor X, while in Canada, Alpha Flight manages to capture Wolverine. They bring him to a lab where Heather is waiting, and Wolverine recalls how she and Vindicator found him in the woods once, wild, and helped nurse him back to humanity and become part of Alpha Flight. General Chasen, Heather's superior, says they intend to find out how Wolverine survived the adamantium bonding process, with Heather adding she only agreed to help so she could be the one examining him. Meanwhile, Xavier & Magneto are confronted by a woman named Vertigo, who tries to kill them; Xavier & Magneto manage to escape. Back in Canada, Heather gives up on her examination of Wolverine and resigns, after which Wolverine breaks free. While Vindicator remains angry that Wolverine left them, the rest of Alpha Flight rush to Wolverine's aid, clearing out the robot guards ordered in by Chasen. Wolverine & Vindicator's fight is halted by Heather, and Wolverine leaves, telling Alpha Flight not to come looking for him again.
What to read the rest before everyone else? Become a patron via Patreon!
Become a Patron!
Newer Post Older Post Home
Posted by Austin Gorton at 12:00 PM