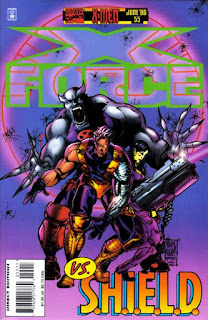 Plot
Split into pairs, X-Force breaks into the SHIELD helicarrier on a mission for the X-Men. Their intrusion is not undetected by SHIELD, but head of security Dum-Dum Dugan is forced to defer his response to someone else. As the team penetrates deeper into the facility, Siryn wonders why the team isn't looking for the missing Warpath instead, while Meltdown hacks into a SHIELD computer and discovers Sabretooth is still alive. The team convenes outside the massive door to a locked chamber, and works together to crack the door open. Inside, they find the captive Cyclops - their mission objective - as well as a cadre of SHIELD agents led by GW Bridge, who has been placed in command of the operation. Cable telekinetically removes the apparatus holding back Cylops' blast then ricochets the blast throughout the chamber, knocking out the SHIELD forces. X-Force and Cyclops escape to the waiting Blackbird, cloaked nearby, piloted by Jean Grey, leaving Dum-Dum furious with Bridge. Meanwhile, in Florida, Warpath is recovering from his encounter with Selene, tended to by Risque, who despite his recovery, doesn't want him to leave.

Firsts and Other Notables
This issue picks up directly after Uncanny X-Men #333, where Cyclops saved Senator Kelly from an assassination attempt by Graydon Creed, revealing he's been locked up by SHIELD in thanks off-panel. 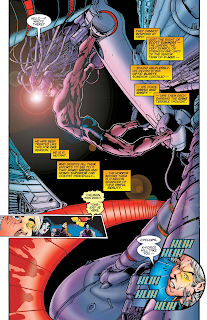 Cable & Domino's old pal (and early X-Force antagonist) G.W. Bridge pops up, leading the SHIELD operation to hold Cyclops/capture X-Force (which he fails at spectacularly). He was last seen in this series in issue #22, and will pop up again shortly in Cable. 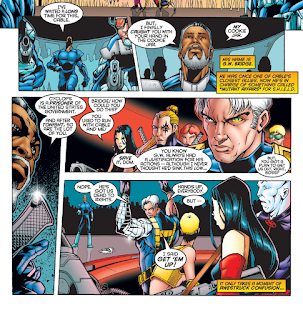 Warpath returns this issue, after being confronted by Selene in the cliffhanger ending to issue #53, with it revealed that he was rescued from that encounter by Risque (the mysterious woman who first appeared in issue #51) and that the pair are now co-habitating in Miami, with Warpath having gotten a massive Thunderbird tattoo on his back. 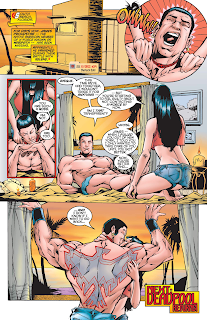 The Chronology Corner
Jean Grey appears here prior to X-Men #53.

A Work in Progress
A narrative caption says no one has ever broken past the helicarrier’s security, and that just seems...inaccurate. Especially given the things’ reputation for crashing. I mean, heck, Rogue herself penetrated it’s security in Uncanny X-Men #182. Maybe this is just a new, fresh off the line, helicarrier, and no one has compromised its security yet.
Siryn notes that Meltdown is now capable of generating multiple explosions in multiple locations at once, illustrating the recent changes in Boomer’s powers.

Caliban has come to fear his own mortality after his encounter with the Externals in the previous story (he can also see that Cable is under the weather himself, the result of his TO virus getting out of control during the events of the Cable/X-Man crossover). 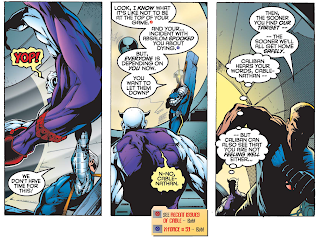 Echoing similar sentiments from Cannonball & Iceman about their mission in Uncanny #333, Siryn here wonders why X-Force was enlisted to spring Cyclops (though here, there's a much better case to be made for their involvement). 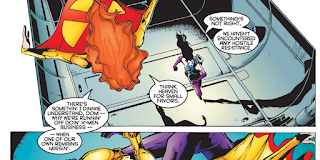 Siryn is able to use her powers like a depth charge, a trick she says she learned from her dad. 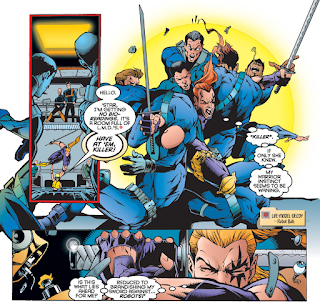 Accessing SHIELD’s database in the hopes of finding out what they have on X-Force, Meltdown discovers Sabretooth is still alive. 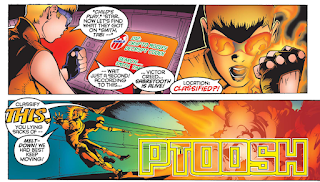 The Grim 'n' Gritty 90s
Nick Fury is not head of SHIELD; I believe this takes place during the time he was believed dead (at the Punisher’s hands). 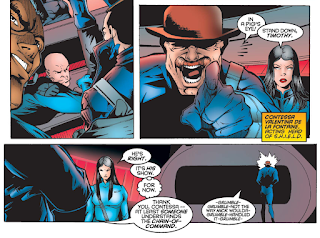 Austin's Analysis
This is probably the best issue of the Loeb/Pollina run yet. It's tightly-plotted, telling a self-contained story (X-Force breaks into the helicarrier and rescues Cyclops from SHIELD) which nevertheless is connected to and builds off events in previous issues (and issues of other series), preventing it from being an entirely standalone fill-in issue; it's not necessary to know the circumstances of how SHIELD came to imprison Cyclops to enjoy the plot beats, for example, but knowing it does add something. Each character (with the exception of Sunspot, mostly) gets ant least one action scene and a bit of characterization. And it's a great use of X-Force, specifically, giving them a kind of military-style infiltration mission while allowing the moderately more respectable X-Men a level of plausible deniability in the springing of their leader. It's not quite an enactment of X-Force's purported "get them before they get us" ethos, but X-Force is absolutely the place to tell this kind of story. And while nothing here is going to win anyone over to Pollina's art style if they're not already fans, it features some of his sharpest work yet, for the first time effectively conveying the action beats alongside the more exaggerated body language & facial expressions that have characterized his tenure thus far. All in all, it's a tight, well-executed issue that ties in with the larger narrative while still telling an entertaining, self-contained story. Good stuff.