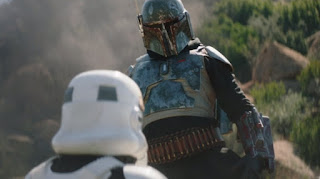 "The Tragedy"
Original Release Date
December 4, 2020
Plot
The Mandalorian and the child arrive on Typhon, and proceed to a temple-like structure. But when the child is placed on a plinth surrounded by ritualistic stones, nothing happens. Just then, the Mandalorian spots an approaching ship. Spooked, he prepares to leave with the child, but when he turns to get him, he discovers Grogu in some kind of trance, surrounded by an impenetrable field of blue energy. Checking on the new arrivals, he is forced into a stalemate by Fennec Shand and her ally, Boba Fett, seeking the armor the Mandalorian acquired from Cobb Vanth.. The trio make a deal: safe passage off the planet by the Mandalorian and the child in exchange for Boba Fett's armor. Just then, Imperial forces arrive on the planet. As Stormtroopers swarm towards the child, the Mandalorian & Fennec fight to hold them back, while Boba Fett dons his armor and joins the fray. However, Moff Gideon's Star Destroyer arrives in the atmosphere and destroys the Razor Crest, after which he dispatches a force of Dark Troopers which manage to capture the child. As the Imperials depart, Boba Fett tells the Mandalorian he intends to honor their agreement and ensure the child is safe, and brings him to Navarro, where the Mandalorian enlists Cara Dune's aid to find someone who can help him track Moff Gideon. Meanwhile, Gideon visits the captive Grogu, marveling at the Force abilities which exhaust him, then leaving the child along in his cell, shackled and powerless.
Firsts and Other Notables
After decades of hints, teases, fervent fan finger-crossing and a few now de-canonized returns, this episode features the official return of Boba Fett, confirming he survived his encounter with the Sarlaac Pit in Return of the Jedi (though not how, exactly, though his face is clearly scarred from the encounter) and was the figure watching the Mandalorian at the end of the season's first episode. After taking out more than a few Stormtroopers with a Tusken gaderffii stick, he proceeds to don his armor, enabling us to see it in action for the first time (one rope-wrapping-around-Luke aside), including the knee mounted launchers and the jetpack missile that was the inspiration for so much corporate teeth-gnashing and toy-based urban legends back in the day.

His iconic Slave I ship also returns, making me wonder if there's a story behind his reacquisition of it or if it's just been sitting in the parking ramp next to Jabba's palace since Jedi. 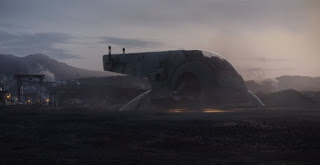 The child is captured by Moff Gideon this episode (just a few minutes, essentially, after playing an adorable game of catch with dad the Mandalorian), it's titular tragedy, with the Mandalorian's own ship, the Razor Crest, destroyed in the process
The abduction of the child is carried out by a force of Dark Troopers, bringing them into canonical existence as well and confirming them to be the beings in the tubes overseen by Moff Gideon at the end of "The Siege". It's not clear, however, if the Dark Troopers are just droids or some kind of cyborgs, though for all their build-up (and Legends backstory), all they did here was fly down, grab Grogu, and fly off again, something jet pack-wearing Stormtroopers could have accomplished just as well, presumably. 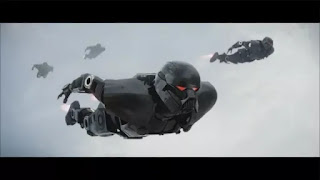 Fennec Shand, the former Imperial assassin whom the Mandalorian seemingly killed on Tatooine in last season's "The Gunslinger", returns this episode as well, and confirms it was indeed Boba Fett who saved her (in part by giving her a mechanical stomach, apparently), making him the mysterious figure who approached her body at the end of that episode, as has been much speculated since.

This marks the first on-screen appearance of the planet Tython, though in practice, that amounts to little as its presented as a fairly generic "rocky & desert-like" setting, the Stonehenge-esque remnants of a Jedi temple aside. 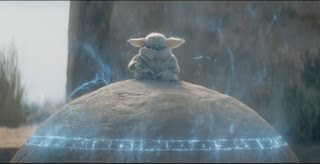 Robert Rodriguez directs this episode (he also did "The Gunslinger").
A Work in Progress
Fennec rolling that boulder down onto a group of Stormtroopers felt like a Raiders of the Lost Ark homage.
Boba Fett describes himself as "a simple man making his way through the galaxy, like my father before me", a mashup of two lines from Attack of the Clones (spoken by Jango Fett to Obi-Wan) and Return of the Jedi (spoken from Luke to the Emperor).

He also mentions that his father fought in the Mandalorian Civil War. There's been a lot of civil wars on Mandalore (not surprising given their martial culture); the one he is referring to is likely the one which ended with the more pacifistic Duchess Satine (sister of Bo-Katan) on the throne, with the losing side going on to form the Death Watch cult, the remnants of which later found and raised the titular Mandalorian.
Boba Fett seems surprised by the presence of the Empire at the end of the episode, which seems to add weight to what the New Republic officer told Cara Dune at end of the "The Siege" and the notion that the Imperial Remnant hasn't really revealed itself at this point.
Since last we saw her, Cara Dune has become "respectable", joining the New Republic to become an official marshal on Nevarro.
Miggs Mayfield, the con the Mandalorian comes to Cara for help locating, is the former Imperial sharpshooter who led the prison break in last season's "The Prisoner". 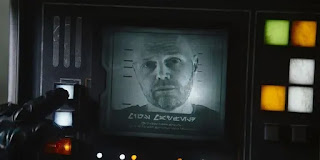 Did You See?
The mug shots Cara & the Mandalorian scroll through at the end of the episode are packed full of little callbacks to previously mentioned prisons or established alien species (including another member of the Scrapjaw Mojtito race that tattacked the Mandalorian earlier this season) from throughout the Star Wars canon, though of course, it's all written in Aurebesh (the written language of the Star Wars galaxy) so it all needs to be translated to get the references (there's a bunch of sites online that have done this already, of course). 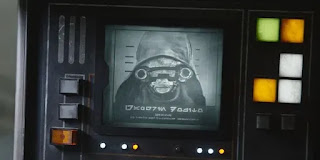 Austin's Analysis
In ways, this has been the episode the series has built towards since its inception: Boba Fett has hung over The Mandalorian since it was first announced, with fans immediately speculating that the titular character was, in fact, Fett; once it became clear he was not, the question then became when Fett would appear, goosed by the show’s return to Tatooine in season one's "The Gunslinger" and the appearance of the mysterious foot at the end of that episode. Then Fett’s armor (and, we know for sure now, Fett himself) appeared in the second season premier, jamming another bullet into the Chekhov’s Gun of Boba Fett Appearing. And so it was with a sense of inevitably that the character we’d seen at the end of “The Marshall” debarked from Fett's iconic ship and shortly thereafter, donned his signature armor.
Yet for all that, the actual unleashing of Boba Fett upon the series was still exhilarating, proving in just a few minutes of action the reputation of the character built up in fans minds for decades, far surpassing anything the character had done previously in live action (in which his most notable action was getting unintentionally knocked into a sand monster by a stick wielded by a half blind guy). And still, the Boba Fett showcase doesn’t feel entirely fan service-y, because it comes in an episode that is one of the most significant yet in terms of upending the series’ status quo (it is, after all, titled "The Tragedy" and not "the Bounty Hunter" or some such thing), as the Razor Crest - easily the most recurring setting in the show - is destroyed and Moff Gideon succeeds in retrieving the child (just as the Mandalorian is struggling the most with the idea of letting the little guy go for good), setting the stage for what is assumedly a big two-part season finale. This will be remembered as the "Boba Fett" episode, but ultimately, all that cool action is superfluous to the upending of the series which also occurred.
Like what you read? Then support us on Patreon &amp; gain access to exclusive reviews of X-Men: The Animated Series and more!