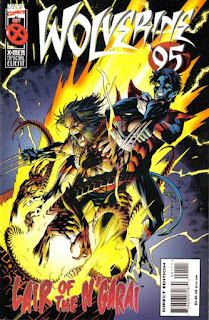 In a Nutshell
Wolverine battles a resurgent N'Garai.

Plot
On the grounds of the mansion, Wolverine comes across the Cairn, the interdimensional portal used by the N'Garai to enter the world from their dimension. Spotting one of the demons, Wolverine attacks, and ends up following the demon into the Cairn. When the mansion's motion detectors sense the fight, Nightcrawler, visiting the X-Men to check in on Wolverine, teleports into the woods and follows Wolverine through the Cairn. In the N'Garai home dimension, he sees Wolverine fighting a large number of the demons. Shocked by Wolverine's ferocity, he nevertheless comes to his friend's aid. Their fight draws the attention of the N'Garai leader, Kierrok, but Wolverine is able to match whatever Kierrok dishes out. When Kierrok dispatches a wave of demons to attack the mansion, Wolverine & Nightcrawler escape through the Cairn and fight them back. Wolverine then wants to return and finish the job, but Nightcrawler stops him, and Kierrok reveals he intentionally led the mutants out of the dimension; Wolverine's savagery made it clear he'd kill every N'Garai if possible, something Kierrok won't allow, so he closes the portal. As Wolverine returns to the woods, the rest of the X-Men arrive on the scene, and Nightcrawler expresses his concern over Wolverine's mental state, even as Wolverine himself realizes it's only a matter of time before he loses control, and that no longer scares him.

2nd Story: Maverick tracks down Wolverine and tells him about an organization trying to find & market a Legacy Virus cure using Deadpool as a test subject, with designs on moving on to Wolverine & Maverick next. Together, the pair free Deadpool but must battle Slayback in the process. Eventually, they overcome him and SHIELD arrives to shut down the organization. Later, Deadpool provides a sample of his blood, but Beast tells Maverick there's no cure there for the Legacy Virus. Undeterred, Maverick vows to keep searching for a cure, while Wolverine realizes the best way to keep himself from going savage is to keep his friends close.

Firsts and Other Notables
This is the first official series annual for Wolverine; while the character received plenty of one-shots on an annual basis in previous years (like Knight of Terra or Bloodlust), each was presented as a standalone, often prestige format, issue unlike the regular "series" of annuals the other books published each year.

Also, with the 1995 annuals, Marvel abandons the chronological numbering of its annuals, instead using the publication year to identify it (so this is Wolverine '95 and not Wolverine Annual #1). This practice will continue into the mid 00s (though not every series will have an annual every year, and in 1997 and 1998, Marvel will use a "team-up" format for the annuals in which two characters or groups of character "share" an annual), at which Marvel mostly discontinues annuals for a few years, before returning to them with new chronological numbering.

Kierrok, Shatterer of Souls (who appeared all the way back in Uncanny X-Men #96) returns in this issue, along with the N'Garai as a whole. 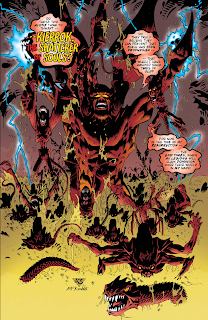 This issue becomes a curious footnote in the short-lived Joe Kelly X-Men run, in which it's revealed that Wolverine's actions here (cutting down a whole mess of N'Garai) make him into a sort of messiah figure amongst the Ru'Tai, a slave race under the thumb of the N'Garai, who are inspired by Wolverine to rise up against their oppressors.

Slayback, one of the villains of the first Deadpool miniseries who inexplicably parlayed that appearance into an action figure, pops up in the second story to fight Wolverine, Maverick & Deadpool. 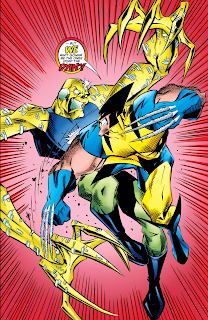 The issue concludes with a trio of pinups.

Creator Central
This is the first Marvel work for J.H. Williams III, who will go on to have notable & acclaimed runs on Promethea, Detective Comics, and Batwoman, amongst other things.

A Work in Progress
Wolverine provides a recap of the X-Men’s previous encounters with the N’Garai, adding in that after the events of issue #143, Xavier had the X-Men destroy the cairn.

Nightcrawler expresses concern that he's never seen Wolverine so savage before, even in his earliest days of being on the X-Men.

Austin's Analysis
In terms of Wolverine annuals (official or not), this is probably the one most directly connected to the events of the main series - focusing as it does on Wolverine's continued struggle with his animalistic side in the wake of his attack on Sabretooth in issue #90, which is the overarching theme underscoring the regular issues of the series at this time. And in returning to the N'Garai (not the deepest possible cut of X-lore, but close), this issue connects with the narrative history of the franchise in a way Wolverine's solo series doesn't often do. Of course, none of that makes the issue inherently good, and while this isn't bad (there's certainly been worse "annuals" in this series' history), it's not terribly good, either. It's mostly unremarkable in terms of the craft - Hama's script is on par with his usual work, and the art is...not as good as JH William's later work, but there is some visceral thrill in seeing Wolverine slice through a mess of demons - which makes, for better or worse, the most remarkable thing about this issue the fact that the series has a narratively-relevant annual for the first time ever.

Next Issue
Next week: Unstacking the Deck looks at the '96 Fleer Ultra X-Men set!