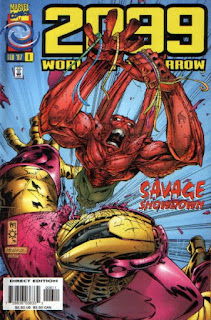 In a Nutshell
The Phalanx press their attack in multiple locales.

Plot
The Phalanx launch simultaneous attacks in both Latveria & the Savage Land. In Latveria, Doom sacrifices himself to allow Spider-Man & Xina to escape, and Xina comes to the conclusion that the only way to stop the Phalanx is to kill their source on Earth: Nostromo. Meanwhile, the X-Men and their allies work to repel the Phalanx attack on the Savage Land, even as tensions between the humans and mutants in the Last Refuge continue to flare. Elsewhere, Wulff & Uproar manage to escape from the Wild Boys, but have to find a way back to shore - and civilization - on their own. On Mars, Dr. Isaac discovers the clones taken by the Takers, including that of her son. Meanwhile, December & Metalsmith desperately try to convince Twilight that the Takers are up to no good, but Twilight is determined to help them. Metalsmith decides to stick with the girl he leaves, and joins her as they blast off Mars, leaving December behind.