Force in Focus: The Mandalorian Episode 06 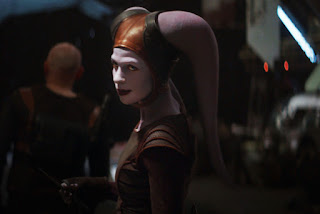 Firsts and Other Notables
This episode introduces a crew of rogues with which the Mandalorian used to run, including their nominal leader Ran, the Twi'lek Xi'an (with whom the Mandalorian seems to have had a romantic relationship at some point), the Devaronian strongman Burg, and the droid Zero. They are joined by a former Imperial sharpshooter named Mayfeld, who takes over for Ran as the field leader of the operation. 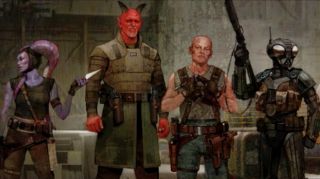 It also features our first solid look at anything New Republic related, as much of the action takes place aboard a New Republic prison ship. The ship is mostly staffed by droids, but does contain one human guard, who is dressed in garb similar to that worn by the Rebel troopers aboard Princess Leia's ship at the beginning of A New Hope. 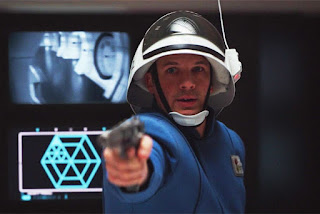 Casting Call
Ran is played by Mark Boone Jr., one those "That Guys" whom I mostly recognize as Flass, the crooked cop from Batman Begins. 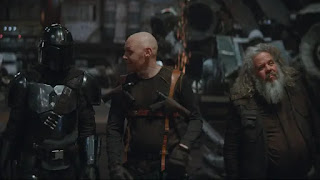 That's Tonks from the latter Harry Potter movies (or, if you prefer, Osha from Game of Thrones) aka Natalia Tena, as Xi'an; her over-the-shoulder wink at the Mandalorian in this episode was heavily featured in the promos for the series.

And, of course, Burg is played by the Kurgan/Shawkshank prison's best/worst guard/voice of Lex Luthor, Clancy Brown.

Matt Lanter, who voiced Anakin Skywalker on The Clone Wars, plays the New Republic guard aboard the prison ship.

A Work in Progress
Xi'an & Qin are of course Twi'leks, one of the more ubiquitous of Star Wars alien races (even in the Sequel Era, which mostly eschews established alien races in favor of creating new ones). Burg is a Devaronian, a species that popped up occasionally in the old EU and which is represented inside the Mos Eisly cantina.

Amidst the prisoners on the prison ship, we briefly see an Ardennian, the four armed race to which Rio (the character voiced by Mandalorian creator Jon Favreu in Solo) belonged, but that was the only species I recognized.

Xi'an seems to suggest that at some point in the past, the Mandalorian committed war crimes on the planet Alzoc III. 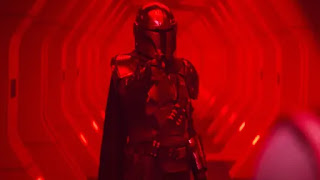 While piloting the Mandalorian's ship, Zero comes across the holo message from Greef Carga that greeted the Mandalorian when he first returned to Navarro with the Child back in episode three. It gets played in part a couple times, making it seem like maybe it's setting something up for a future episode (maybe the surviving members of the crew will use it to try to track down the Mandalorian?).

As with previous episodes, most of the characters introduced here (with the exception of Ran & Qin) are seemingly written out of the story by episode's end, but left notably alive for (presumably) return engagements.

Did You See?
Series directors Dave Filoni, Rick Famuyiwa, and Deborah Chow play the New Republic X-wing pilots which take out Ran's station at the end of the episode. 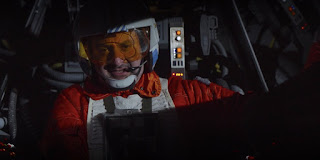 Austin's Analysis
Despite the last episode being set almost entirely on Tatooine, this one felt the most Star Wars-y of any episode so far: the "crew of rogues assemble for a furtive mission" felt like something out of The Clone Wars during the season when it was obsessed with Cad Bane and bounty hunters, and the main characters on Rebels were constantly performing prison breaks (I'm even fairly certain there's at least one Rebels episode when someone gets locked in a cell by the person they were trying to free). Combine that with various visual touches from A New Hope (the white halls of the New Republic ship, the guard's attire, the X-wings at the end, not to mention the importance of a prison break to the plot of the original Star Wars), and the end result just feels like Star Wars in a way that exceeds all the earlier ones.

Plus, this episode managed to successfully weave a couple different genre stylings into its plotline, with the first half of the episode playing like a traditional heist story (the crew assembles, starts the heist, something goes wrong, someone is betrayed), while the second half shifts into an almost horror movie-like tone (as the Mandalorian takes on the role of the silent killer, attacking the rest of the crew one by one - though, of course, he doesn't actually kill them). It shows the series' ability to apply its characters and storylines to genres beyond Western pastiches and well-executed action sequences, and all-in-all, it makes for easily the best "standalone" episode of the series thus far.