Force in Focus: The Mandalorian Episode 05 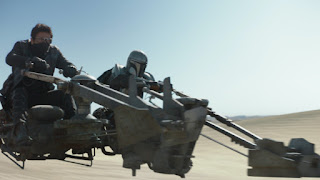 Firsts and Other Notables
This episode is set on Tatooine, and provides numerous notable callbacks in the process: the city of Mos Eisley, the cantina therein where reality fluctuations around an encounter between Han Solo & a bounty hunter named Greedo resulted in thousands of angry nerds crying out in rage, the Jundland Wastes (which are not meant to be traveled lightly), dewbacks, and the native Tatooiners aka the Tusken Raiders, to name but a few. 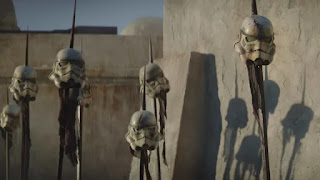 Casting Call
Jake Cannavale (son of Bobby) plays the titular gunslinger, Ming-Na Wen (of Agents of SHIELD and Street Fighter fame), whose presence was much touted in the run-up to the launch of the show, debuts as the assassin Fennec Shand, and comedian Amy Sedaris (whose involvement came as a complete surprise to me) plays the mechanic Peli Motto.

This episode continues the series' curious quick disposal of seemingly-important characters: IG-11, Cara Dune, and Fennec Shand (and/or the actors playing them) were all heavily featured in the series' marketing, leading many of us to believe they were intended, in some way, to be recurring players on the show. But thus far, each has been introduced and (seemingly) left behind in the same episode (though all, to some degree, remain on the board for a return in the future). 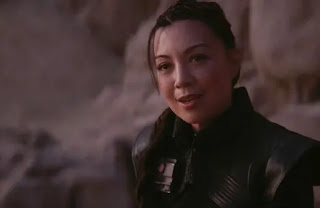 A Work in Progress
Fennec names the world from episodes one and three, where the Mandalorian received his armor, rescued the Child, and blasted away from the rest of the bounty hunters and Mandalorians, as Navarro. She also establishes that word of those events is spreading throughout the galaxy.

The droids assisting Peli are of course Pit Droids, first seen in The Phantom Menace in Watto's shop and later during the pod race scenes.

The cantina is now being staffed by droids, an ironic turnaround considering Wuher's the bartender assertion to Luke in A New Hope that "their kind" wasn't served there.

The Mandalorian tells Toro that Fennec is "no good to us dead", echoing the same thing Boba Fett asserted to Darth Vader about Han Solo in The Empire Strikes Back.

I'm not 100% sure, but I think the scenes in which Peli is looking after the child and talking to her droids is the first time in the series that a scene occurs without the Mandalorian in it.

What's the Deal With That Closing Shot?
The episode ends with something of a cliffhanger, as a mysterious figure approaches the possibly-not dead Fennec Shand. This could be anyone, from the client to Greef Carga to Cara Dune to someone totally new, but of course, as the internet will tell you, this could also be Boba Fett, who fell into the Sarlaac Pit on Tatooine in Return of the Jedi and was alluded to have emerged, alive if not well, in Chuck Wendig's canonical Aftermath novel trilogy.

In general, I tend to favor a "simplest explanation is the most likely" approach to this kind of theorizing, and having someone like Greef Carga team-up with Fennec in a sort of anti-Mandalorian group is exactly the kind of thing a series would do heading into its final episodes. But at the same time, I can't fully discount the presence of Dave Filoni directing this episode; as the man who "resurrected" Darth Maul for Clone Wars and introduced Grand Admiral Thrawn into the canon via Rebels, using his episode of the show to setup Boba Fett's return would be very on brand.

Austin's Analysis
"Fan Service" is one of those terms that gets thrown around with a lot of negative connotation behind it (somewhat ironically for a thing meant to make fans happy...), and I've seen it disparagingly mentioned in regards to this episode without really even looking for reactions to it. But the thing about "fan service" is that it's highly subjective, and one fan's eye-roll inducing callback is another fan's fist-pump of excitement for the same. All of which is to say, while this episode isn't NOT filled with fan service, for me, most of it fell on the positive side of that sort of thing. Tatooine is of course perhaps the most iconic of Star Wars locations, but its not a stretch for a character like the Mandalorian to go there, what with its longstanding existence as a planet on the legal fringe. Yes, the Mandalorian went to the Star Wars cantina and met a cocky gunfighter, but restraint was shown: the iconic musical tune is nowhere to be heard, it's not like the gunfighter is sitting in the exact same booth as Han. There's fan service aplenty, but for the most part, it passes by with few winking acknowledgements on the part of the show: uber nerds catch them, but layman may not (or at least not all of them), and catching the references isn't required to understand what's unfolding on the screen.

And the episode itself was strong as well, fan service aside: it's another chapter that feels like a TV episode and not the next installment in a long movie, with actual scenes taking place independent of the Mandalorian's presence. Amy Sedaris is just a delightfully random bit of casting. The Mandalorian/Gunslinger assault on Fennec's high ground position at night was another standout action set piece (the use of the flares in particular made for some cool lighting effects). And the showdown between the Mandalorian, the gunslinger and the assassin is milked for as much tension as possible, even if the ending seemed a forgone conclusion. All in all, take or leave the fan service, another strong episode that actually feels like a TV episode.