Firsts and Other Notables
Continuing the "named series" convention begun with the previous wave of figures inspired by the animated "Phoenix Saga", the eight and ninth series of original X-Men figures are presented via named grouping, "Mutant Genesis" and "Invasion" (there was an additional series of repaints/repackages of older figures between "The Phoenix Saga" and "Mutant Genesis").

Both series, of course, contain the requisite Wolverine variations, and the influence of "The Phoenix Saga" can be seen in the Fang Wolverine figure (and Erik the Red's inclusion in "Invasion").

Other than Fang Wolverine (Fangverine?), "Mutant Genesis" features all original figures, whereas "Invasion" features new versions of Archangel, Sabretooth (his third), and Iceman, all of which are beefier, more dynamic versions relative to their original designs

Havok (in his X-Factor gear), the first figure for the character, appears in "Invasion", making him the second of the Peter David X-Factor team to get a figure (after Strong Guy).

The Maverick protoype figure that was created for inclusion in Series IV is finally released as part of "Mutant Genesis". 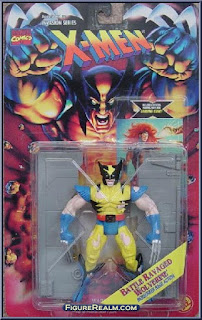 X-Force Series VI continues the lines efforts to blend of-the-moment characters with a desire to get out the full roster of X-Force, here giving us Domino, one of the line's rare female figures (following on from Storm, Rogue and Phoenix). As of this series, I believe Boomer & Feral (two more female characters) are the only core X-Force members without a figure.

Cable, the Wolverine of X-Force, gets another figure as part of series VI a "cyborg" variation on his blue-gold X-Men-friendly uniform from the previous series which features snap-on skin that can be removed to reveal robotic parts. 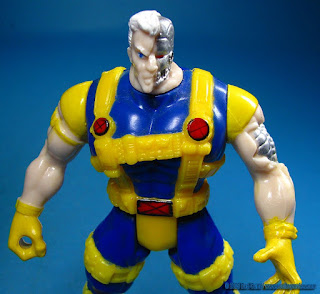 Deadpool gets a new figure and, like the re-dos in "Invasion", it is significantly beefier than his previous figure. 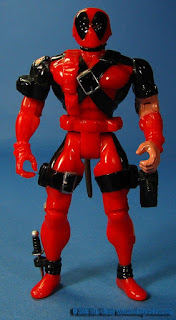 The whole of series VI, in fact, feature, pound-for-pound, a ton of plastic, as Blob, Caliban, and Nimrod are all just massive figures.

The inclusion of Blob and Spiral in this batch of figures means we are that much closer to having a full collection of Freedom Force figures.

Thanks to Raving Toy Maniacs, Figure Realm, and Cool Toy Review for the pics.

Of Their Time
Many of the looks of the figures in these series are directly inspired by very specific issues/story arcs/era-specific looks. Sabretooth is the most obvious, looking like he was lifted directly out of X-Men #28 and coming with the metal gloves/muzzle restraints, but Iceman is also depicted via his "spiky, blocky" form that JRjr debuted in Uncanny #302 (and his accessories include larger hands that can snapped onto the figure). Caliban, who has joined X-Force at this point in the comics, is rendered in the style of his appearance in Uncanny X-Men Annual #18, complete with the cape he really only ever wore in that issue.

Cameron Hodge, a character who has been around since X-Factor #1 and been a villain since shortly thereafter, gets his first figure thanks to his involvement in "Phalanx Covenant". 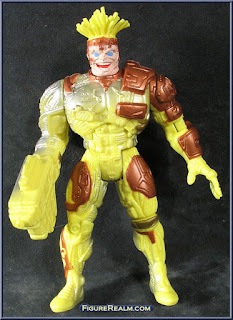 Sunfire's figure features his new "cyber" look which debuted in Uncanny X-Men #284, rather than his classic (and better) and sunburst costume.

Senyaka, best known for being inexplicably killed by Magneto than being randomly resurrected for an issue of Cable, wins the award for "most 90s character" in this batch, though he has some strong competition.

For example, Cable's son Tyler appears in his newly-styled Genesis guise, complete with a diminutive Spyne accessory (who, in the comics, was regularly sized).

The only figure of Nimrod made to date comes in the form of its done-in-one appearance from X-Force #35-36. 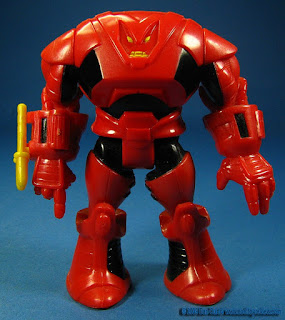 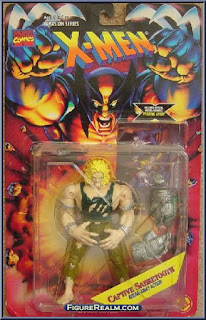 While not the most classic of looks for the character, there's a ton of personality imbued in the figure with decent action features (the figure's arms slash out and its mouth opens when the legs are squeezed together) and dynamic articulation. 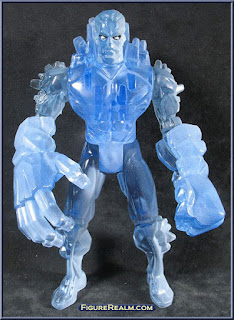 Another "jumps off the page!' updated look for a character, with the snap on ice hands adding a new layer of playability. 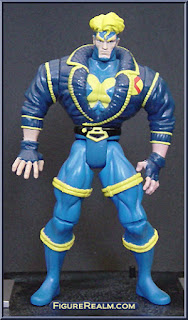 A near pitch-perfect recreation of the character's comic look, with a non-intrusive action feature (his spring-loaded arm can "hurl" an energy blast). 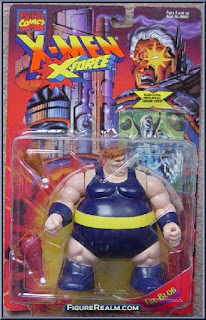 I'm a sucker for the "big hunk of plastic" figures, and kudos to the designers for just going there with Blob, the character who most deserves that treatment.

Austin's Analysis
"Mutant Genesis" is a dud of a line: it technically contains two X-Men (in Sunfire and Wolverine), but neither are wearing their classic (or interesting) looks, and while it's kind of neat someone like Hodge got a figure on the back of his connection to the Phalanx, I doubt anyone was exactly clamoring for a Cameron Hodge figure (now, give me Hodge in his "X-Tinction Agenda" robot spider snake body, and I am there!). But "Invasion" more than makes up for it, with some classic comics-inspired updates, an all-time great Havok figure and one of those "never would have imagined" figures in Erik the Red (At this point in time, Erik the Red has more action figures than, say, Psylocke).

The X-Force wave, meanwhile, continues that line's consistent showing. The only real dud of the bunch is Genesis, but Toy Biz can't really be faulted for including a character who certainly seemed poised to be a big deal (for Cable, at least) at the time. It's a shame Nimrod comes via its brief and largely-forgotten 90s redesign, and the figure certainly lacks articulation, but it's also an impressively large figure for the price (as is Blob and the more-articulated Caliban). All in all, the X-Force line continues to be surprisingly well-balanced, with each wave rolling out additional members of the core team alongside very 90s hits and more classic villains, a strange role for the action figure line based on that most 90s of X-books.